I think I may have mentioned here once or twice or seven billion times that I hate having my picture taken. I am not a photogenic human. (This is not the same, by the way, as saying I’m an unattractive human. This is not a self-esteem issue, merely a “the way my particular features tend to be caught in pictures is not flattering in spite of the fact that I’m an okay-looking person in real life” issue.)

My ex-husband is a very photogenic person, and so you can imagine my delight at discovering that nearly every candid photo of our offspring is amazing. Those cheekbones! Those lips! LOOK AT MY BEAUTIFUL BABIES! But a lifetime of living with me—the person who mugs for the camera so I’m obviously ridiculous rather than being caught “candidly” appearing to be inebriated, furious, or both—has, um, caused some issues. Chickadee does a beautiful “smile for the camera” on command, but then hates every single picture it produces for reasons that would never even cross a normal person’s mind (“this eye is squinty, see?”). (And for what it’s worth, she does a pretty masterful version of my own HERE’S ME OPENING MY MOUTH AND EYES AS BIG AS THEY GO hamminess, too.) Monkey is constitutionally incapable of smiling on command, which means we have some gorgeous candids and some absolutely painful “portraits.”

(Here let us pause while I reiterate that both of my children are gorgeous, which should go without saying, but I don’t want to get an angry phone call later.)

Marrying a photographer was an EXCELLENT idea, especially if the goal was to drive said photographer crazy with his ready-made family of people who hate to have their photos taken. (HAHA. HA. SORRY, OTTO, WE LOVE YOUUUUUU!) I do think he derives at least a little pleasure from seeing it’s not just him we’re impossible for, though. Now would be a good time for you to go read my post at Alpha Mom about Monkey’s senior portraits, and then when you’re done with that, come back, because I have a little surprise for you after the jump.

You know I don’t share pics of my kids here, right? But I just wrote an entire post about Monkey’s pictures.

I had high hopes. Listen, you’re just going to have to trust me when I tell you that this kid has a thousand-watt smile and cheekbones that could cut glass. He’s a good-looking fella. (Me? Biased? I don’t know what you’re talking about. I’m just sharing facts.)

They put him in that fake tux and suddenly he looked like a grown-up and I got all teary and I could see into the future where my once Small Boy, now Medium Boy, is all man, no more boy. *sniffle*

If I just said the right things while they were shooting the pics, I could get him to flash one of those smiles I love so. We’d have a pic that would match how I see him in my head: handsome, utterly guileless, and pure joy.

I tried. I did. I cracked jokes. I tried to come up with puns (I hate puns; he loves them). I loomed over the photographer’s shoulder and pretended to dance behind him and generally made a fool of myself while Monkey rolled his eyes and asked me if I was feeling okay.

In my mind, we would get this: 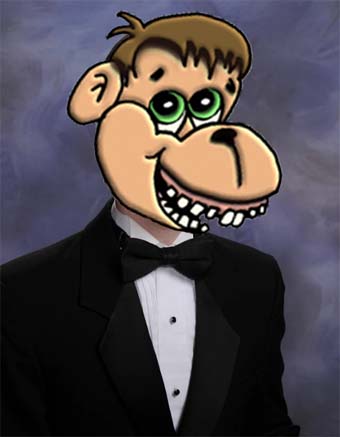 (Well, you know what I mean. Use your imagination.) That grin that cracks his face wide open and makes the whole world a little brighter? We’d capture it forever, right on top of that weird fake tux that he couldn’t stop complaining was choking him to death.

So I tried my best to evoke it. Eventually, I had to admit defeat. It wasn’t going to happen. And so, instead, what we got was more like this: 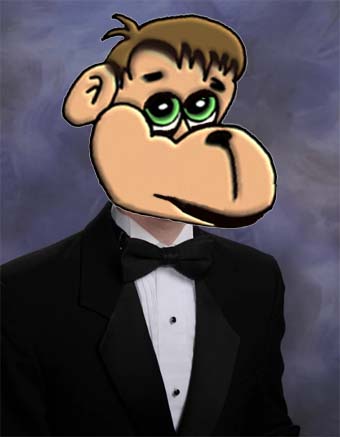 Don’t get me wrong, he’s still handsome. But it’s a little broody. A tiny bit smirk-y. Just a dash of “I can’t wait to eat your liver with some fava beans and a nice Chianti,” if you will. It’s just SO SERIOUS.

Oh, well. One more hurdle cleared. I feel confident that he’s not actually going to kill and eat anyone before graduation, so we’re good, I guess.