Here we are adulting

By Mir
May 23, 2016
Category Haven't been hit by lightning yet! | Offspring: ecstasy and agony | Woohoo!

Hey! How was your weekend? Didja do anything fun? Things were pretty uneventful ’round here.

I mean, um, I’m pretty sure there wasn’t anything good on TV, though my firstborn did graduate from high school. That was pretty much the most exciting thing ever for a million reasons, chief among them that I will do almost anything to see her looking as happy and proud of herself as she did on Saturday. It got even better on Sunday, when everything was over and we bid the relatives adieu and commenced spending the entire day lounging around in our pajamas. Not that the rest of it wasn’t great, you understand, but that day of communal couch-potato-ing was sort of like the collective exhale. It was glorious.

My parents were here, and Otto’s godmother, and after graduation we threw a small not-a-party because Chickadee did not WANT a party, so we compromised with “we are just inviting some of OUR friends to come drink some sangria and eat fancy cheese and hang out, you can show up or not.” Originally she said she would probably be elsewhere, but oddly enough, she ended up spending most of the evening with us, leaving to attend another party for about an hour (they had cake, so: priorities), but mostly sitting outside with the rest of us, feet tucked up underneath her, phone constantly in hand, looking every inch the incredible young woman ready to take on the world who she’s somehow become.

Lest you think everything has changed, however, rest easy. Be ye not alarmed! The Chickadee we know and love is still herself in this new “adult” form.

For example, the night before graduation, my dad took us out for a fancy dinner. This is something we don’t do all that often, you understand, but this was a pretty special occasion, and on such occasions I like to delude myself into believing that my children know how to behave in public, because I sure do enjoy going out for a nice meal, even if I have to bring them along.

We did it up. The whole nine: wine, appetizers, mains, desserts and cappuccino—the works. It was sinful. Monkey ate absolutely everything that wasn’t nailed down (I love that he enjoyed it so, though at home he’s “not that hungry” so perhaps I need to start serving him everything topped with microgreens and other fancy accoutrements?), and Chickadee eschewed the chef’s veggie plate in favor of a double-size Caprese salad made with the most beautiful heirloom tomatoes I’ve ever seen. (Note: Chickie “doesn’t like” tomatoes. Unless they are in Caprese salad. Yeah, I dunno.)

This is the kind of restaurant where people exist purely to dart to your table and refill your water glass as soon as the level drops an inch. After about the fifth such ninja water pitcher visit, Chickadee leaned into me and murmured, “I can’t drink any more water. The constant refilling is really disturbing me.” We giggled as quietly as we could manage, and I encouraged her to continue hydrating, anyway. Her solution: She would wait until the bearer of the pitcher wandered off to another table, then she would drink some water and TOP OF HER WATER GLASS FROM MINE. The next time the pitcher appeared, I would get a refill, but hers was full. Crafty.

When it came time for dessert, mini mason jars of fancy sugar cubes were placed on the table for our coffees, and Chickadee immediately opined that she really, REALLY wanted to just eat one of those cubes. “They look like marshmallows!” she said. “They just look so delicious!”

I reminded her that she’s an adult now, thinking that would quash this particular urge. SILLY ME. This caused her to grab and eat a sugar cube while declaring that yes, she is an adult, SHE CAN MAKE HER OWN DECISIONS. Of course then she was laughing so hard I thought she was going to choke.

tl;dr: We had a delicious dinner but you can’t take us anywhere.

Also, last night I called Chickie downstairs before Otto and I went to bed, ourselves, to ask her to do something she needed to do before bed, and she said, “Well I realized it was pretty late and I figured it was too late for me to come back down.”

I was confused. “You were just going to not do it because you thought it was too late to come downstairs??”

Now it was my turn to laugh until I choked. “Chickadee,” I said. “You’re 18. You’re a high school graduate. You’re moving out in a couple of months. DO WHATEVER YOU WANT. Just, um, don’t bug US after 9:30, but other than that, you’re good.” It was as if this was a revelation. Apparently I hadn’t clarified that I wasn’t planning to continue enforcing bedtime rules (which, really, have only been “go upstairs so I don’t have to look at you staying up way too late” rules) post-graduation. HAHA.

I’m not going to lie to you; this last month has been a roller coaster. Change is hard. Anxieties were running high. And even in the midst of the triumph that was this landmark in my child’s life, all wasn’t idyllic. Tempers flared, sometimes. We got through it and honestly, the weekend was amazing, bumps and all.

We need to talk about something. Call it the dark shadow on this happy time, if you must, but I’m not going to remain silent just because it’s uncomfortable.

Listen, if you’ve read here for any length of time at all, you know that I’m a decent baker. Maybe even a good baker. I’d asked Chickadee several times about what she wanted to eat at the not-a-party and she gave several unhelpful answers, and finally I decided to take matters into my own hands. I did prepare a lot of food for this shindig. And I baked some of the kids’ favorite cookies (oatmeal chocolate chunk). But I also went to a small, local bakery I adore to order some special treats, because it’s not every day your kid graduates from high school, and this place is known for some beautiful decorating work.

It was about six weeks ago that I stopped in with a bunch of images loaded on my phone. We would need cake bites and macarons, of course, in her college colors. Also, I wanted to get some fancy fondant cookies. (Basically I was ordering everything I was too lazy to make myself or thought was beyond my personal decorating expertise.) I started showing pictures. Could they put her college mascot on some cookies? Of course, they said. In fact, they could make t-shirt shaped cookies with the mascot. OHHHHH, I said. That’s PERFECT! And… could they make music note shaped cookies with the college logo? Of course, they said. Do you need printouts of these pictures, I asked? Nooooo, they could handle it. Should I stop back to approve the design, maybe a day or two ahead? Noooo, they’d be fine.

We were supposed to pick up from the bakery on Saturday morning, and I forget what I was doing at the time, but Otto offered to go. A tiny stab of foreboding poked at the back of my brain. “Please open the boxes and take a look before you take them,” I told him. He said he would. And, it turns out, he did. But he wasn’t sure how the discussion had gone and also maybe he was struck with temporary blindness. Hard to know.

Here’s the mascot of Chickadee’s college (and just to be clear, this is the picture I showed the bakery): 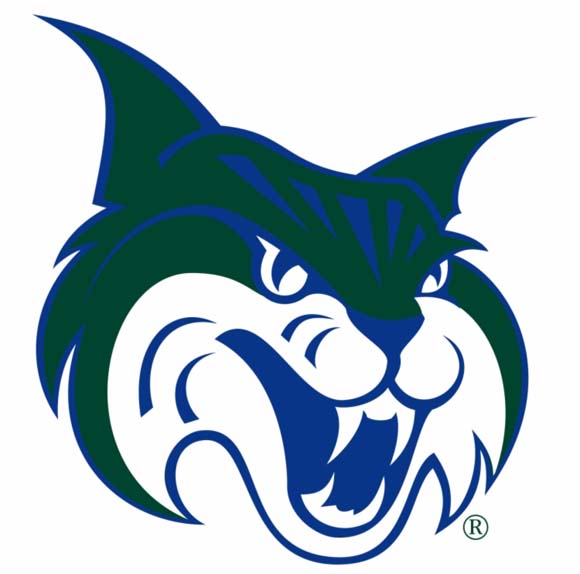 He’s a bobcat, and he’s kinda badass. (Also: his name is Thunder. Because of course it is. Did you expect him to be named Fluffy or Bobby? PSHAW I SAY.)

Now, um, I hope you’re sitting down. These are the cookies we received:

We asked for Thunder the Bobcat, and we got Tony the Tiger after a bender, drawn by a toddler. It… was upsetting. Then it was funny. But I paid kind of a lot, so I wasn’t happy. And just in case you’re having some difficulty comparing, let me help: 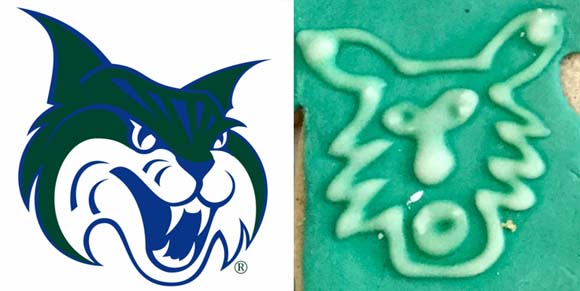 I’m not even going to show you the music note ones. They just have letters scrawled on them—not the school colors, not the logo, just a couple of letters—and… yeah. They got really overloaded with graduation orders this weekend, I think, and I get that stuff happens. It’s being resolved.

We did not serve the cookies. I did, however, bring several friends into the kitchen to show them the cookies. It was like a sideshow attraction. “LET ME SHOW YOU OUR FANCY COOKIES,” I would say, and then we would go into the kitchen and I would open the box with a flourish and dissolve into giggles. Because I’m a grown-up.

Anyway. Everything about the not-a-party was great, and the cookies weren’t missed.

As my dad and stepmom were getting into their car to leave, and Otto was getting into his car with his godmother to take her back to the airport, my dad made a comment about hating for it all to be over. “COME BACK SAME TIME NEXT YEAR AND WE’LL DO IT AGAIN!” I yelled. And then I realized that yes, we’ll be doing it all again next year for Monkey. And then my face looked remarkably like those cookies, I suspect.