I’m not gonna lie; I’m a little verklempt today. (Spellcheck insists that verklempt is not a word. Spellcheck is now dead to me.) In just a few short weeks, my blog turns 12, which isn’t all that remarkable, I suppose. But it means that when I started here, Chickadee was just 6. And today, Chickadee is 18.

I once gave birth to a baby and now that baby is a full-grown adult human (theoretically) and I HAVE MANY FEELINGS TODAY. I will give you just a glimpse of some of that, in a minute, but of course we all know the important thing here is THE GOODIES. (Of course.) This morning the kids had traditional birthday cinnamon rolls, as is dictated by family law (prepared yesterday, refrigerated, and pulled out and baked wayyyyyy too early this morning), but yesterday for Nerd Night I made buttered popcorn chocolate chunk cookies. 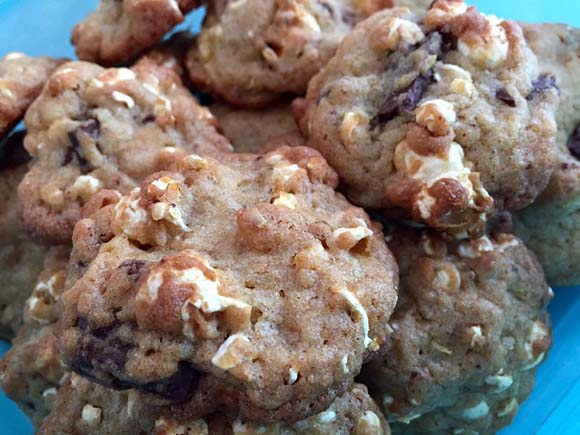 I adapted ever-so-slightly from that recipe as written (I chopped up Hershey’s Special Dark bars instead of using chips), and she says she adapted slightly from the version in The Smitten Kitchen Cookbook. (Also, shout-out to Carmen for posting about these cookies and not being offended when I demanded the recipe.)

A heaping plate of cookies left for Nerd Night and that was the last I saw of them. “A little weird but really good” seemed to be the consensus. I may actually try a gluten-free version of these at some point, because 1) salty/sweet chocolate is my jam and 2) there is so little “cookie” and so much popcorn and chocolate, I think it will be amenable to sometimes-finicky gluten-free adaptation.

Last night, Chickie lingered downstairs, sort of following me around instead of going up to her room at her regular time. Her birthdays have always brought a measure of angst along for the ride so I just let it go. It wasn’t until she was hovering over me around 10:30 while I was finishing the dishes and thinking about going to bed, myself, that I asked her if she was gearing up for a birthday freakout.

“Maybe?” She said. “I don’t know.” We looked at each other, years of shared experience hanging in the pause between us. “Maybe I’ll wait until tomorrow,” she offered, almost hopeful. We laughed.

“Listen, this is a GOOD birthday,” I said. “For years we just didn’t even know if we’d get here, and—”

“NOPE,” she said, waving her hands in the air. “Stop talking. No. Don’t. You’re doing that… thing… with EMOTIONS… and I can’t. We’re not talking about it.”

“Okay,” I said. I washed a few more knives and set them off to the side of the sink. She kept standing there. I moved on to the bowl from the mixer, and for a few minutes I really had to scrub to get the cinnamon roll dough remnants off the sides. “It’s just,” I said, after a bit, “I am SO PROUD OF YOU—”

“Okay,” I said. I finished the dishes and wiped out the sink. I turned to face her. “Why are you still HERE? GEEZ.”

“I was waiting for a hug,” she said. She flung her arms wide. “HUG MEEEEEEEEE!”

I did. I hugged her hard and long and I managed to keep my mouth shut but oh, the things I wanted to say about how much I love her and how hard she’s worked and how lucky we are and how bright the future looks. I wish she could see herself through my eyes. But she’s walking her path and I’m walking mine and I’m just so, so glad those two paths weave in and out of each other as much as they do. And when someone asks you to stop talking (twice) it’s probably time to stop talking.

Tonight we’re going to do a Very Special 18th Birthday Thing together, and I’m excited about that, but mostly I am excited just to be here and for life to feel stable and good.