Nerd Night was on hiatus for a few weeks (Easter and other scheduling issues), and lo, there was much sadness across the land. “Why aren’t you baking us delicious sugary things?” lamented my spawn. It was tragic, truly.

Sometimes I get a wild hair about a certain kind of recipe, and other times a recipe just sort… suggests itself to me. Like, two weeks ago, Nilla Wafers were the Penny Item the day I went grocery shopping, so I ended up with a box of those. And then a week ago, Jello Pudding mixes were B1G1. So I figured I’d make a good ol’ southern banana pudding, but of course both of my children actually don’t like banana pudding because “the texture is weird with pudding and chunks all together,” so I found this recipe for banana pudding bars, instead. If you look at their photo, and then look at mine, you’ll see that mine don’t look anything like theirs, for some reason. 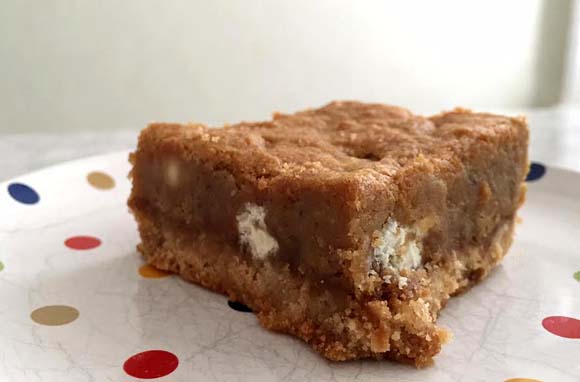 Why? I have no idea. I made the recipe as directed save for three minor changes: 1) I used the entire box of Nilla Wafers (and a little extra butter) for the crust, because what was I going to do with extra Nilla Wafers?, 2) instead of two eggs, I used one egg and one banana (more banana flavor = more betterer), and 3) I added extra white chocolate chips because yum. Also, the recipe says to bake the whole thing for 10-12 minutes (after the crust pre-bake) and that is a DIRTY LYING LIE, because I ended up baking it for… at least 30 minutes. Maybe 35. I think that was just a typo, honestly.

The children report these were “dense and banana-y and delicious.” (They should be, as one pan contains 3+ sticks of butter.) Monkey also added his highest praise of “The texture is very pleasing.”

Now here’s something that has nothing at all to do with baking:

In… nearly a dozen years (!!) of writing here, I know I’ve addressed more times than I count the disparity in how my kids deal with illness. Along with that, if guilt could become a physical entity, we could then fill multiple warehouses with mine, as I have consistently BOTH either completely missed it when Monkey was dreadfully ill (because he never complains) OR brushed off Chickadee when she TOLD me she was sick (because she always complains).

I mentioned last week that both kids had been sick; I took Monkey to the doctor for a sinus infection (’tis the season) and Chickadee had sort of been malingering for a while and had lost her voice for a few days but finally seemed to be on the mend. Well! On Saturday I finally woke her up at 12:30, and although she didn’t have a fever, she said she felt terrible and proceeded to nap and go to bed early. On Sunday she just didn’t look right at all, so I ended up taking her to Urgent Care. Here I would like to state for the record that THROUGH THE WEEKS SHE’S BEEN SICK I’ve looked in her throat and taken her temperature multiple times. NOTHING. But of course on the day I take her to the doc-in-a-box it turns out that her tonsils are gigantic and her symptoms are classic for mycoplasma (that’s the thing that causes walking pneumonia). Um. Ooops?

[Sidebar: Doc-in-the-box was also a comedian. “Geez, Mom, she TOLD YOU she was sick! Hey kid, do you know what the most common form of child abuse is? NEGLECT. If you wanna call DFCS, that’s fine.” My protestations that she’s nearly 18 and also sort of a whiner were waved off. Chickie enjoyed him greatly, and I probably deserved it.]

So, uh, Chickadee is now enjoying a nice strong course of antibiotics and I’m marinating in yet another round of maternal guilt.

That’s not actually what I wanted to tell you about, though. While we were waiting to see the doc at Urgent Care, a frantic young woman came in with an infant in a carseat carrier. Between gulping sobs she explained to the woman at the desk that the baby had fallen off the bed onto her head. The desk woman asked the age of the baby and a couple of other questions, then left to ask a doctor of they were okay to be seen there or if she should go directly to the ER.

The baby—who was freakin’ adorable—was just hanging out in the carseat, dozing. But I heard the mom say that she’d cried/screamed for a while after it happened but calmed down in the car on the way over. Her poor mom just stood there crying while waiting for the lady to come back.

And here’s the thing about me and talking to strangers: I’m never really sure where the line is between helpful and creepy, y’know? But I just felt so bad for her. She was obviously a first time mom convinced she’d broken the baby. I remember feeling like that. So I got up and went over to her, even as I saw Chickadee rolling her eyes and getting ready to pretend she didn’t know me.

“Hey,” I said, in what I hoped was a comforting and non-alarming way. She turned toward me. “Take a couple deep breaths,” I said. “It’s okay. You’re here, they’re going to check her out, and babies are actually pretty bouncy.” I kneeled down to say hi to the baby. “She’s beautiful. Hi there! Did you scare your mama? That wasn’t very nice!” The mom offered a weak smile. The baby tracked my gaze and seemed vaguely alarmed (that seemed appropriate, under the circumstances). I stood up and pointed over at Chickie, who was pretending to ignore us. “That’s my first baby,” I told the mom. “She’s going to be 18 next week, and when she was just a little bit older than your baby she reached up to grab her dad when we were playing on the bed, and she missed, and went tumbling off and landed on her head. She did that silent scream thing, first, then screamed so loud and for so long I was sure she was dying. And she was fine. I know how scary it is, though.”

Before she could say anything (maybe to ask me to go away?), a nurse came out to look at the baby and talk to her, so I went back to my chair. They decided it was a non-emergent situation and told her to take a seat and they’d see her in a few minutes. Then they called us back; when we finished up, mom and baby weren’t in the waiting room, so we didn’t see them again. I hope the baby was okay.

The funny thing was that I never believe that nonsense about how time passes in a blink—some of these child-rearing years have been longer than others, but long they have been—but as soon as I started talking it really was just like yesterday when I watched my beautiful baby girl go sailing over the edge of the bed, landing square on her noggin in agonizing slow-motion. I remember that helpless feeling. I remember the fear, the guilt, the horrible “what if”ness of it all. I remember thinking there was no way we’d both make it her adulthood.

But next week, that’s where we’ll be. She’d better hurry up and call DFCS, I guess.