For two weeks in a row, now, there hasn’t been Nerd Night. This would be a Major Crisis, but fortunately yesterday (for Easter) we found ourselves at a gathering that included most of the Nerd Night crew. So: no official game, but at least the kids got to hang out together. Also, I baked, because it seemed like the thing to do.

Specifically, I made two kinds of whoopie pies, because whoopie pies are a pain in the butt, but hey, it was Easter, after all. 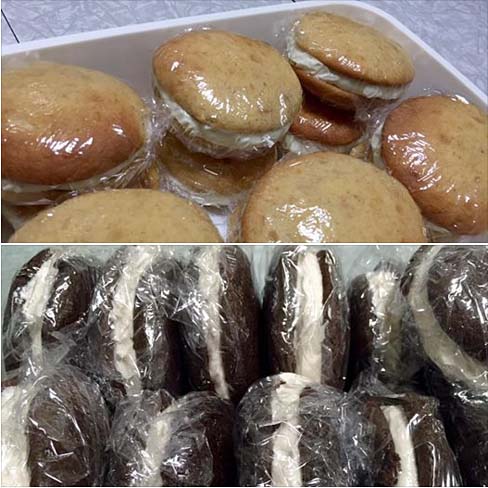 In case you want to make your own, the lower image is the traditional chocolate version with no changes, and then the top ones are these lime-filled ones, though I added some ground ginger to the batter, too. (I added two teaspoons and it wasn’t enough to be noticeable in the final product. I’d go at least a tablespoon, next time.)

We ate, drank, and were merry. I brought two dozen pies to the party and they all got eaten. It was a good day.

(Did I hide 2 chocolate ones in the back of the fridge and put them in the kids’ lunches today? Maaaaaaaaaybe.)