Soooo… last week was sort of A Week. By Friday—no joke—I was falling asleep with my eyes open on the couch at about 8:30. (We’re all fine. Our school district is in the middle of an enormous clusterfuck and as I am stupidly “involved” and “part of the solution” [geez, whose stupid idea was THAT??], it’s just been… a really long week.) On the bright side, it was just the kick in the pants I needed to sit down with Chickadee this weekend and order her graduation invitations. We may have high-fived over the notion of her being nearly finished with this particular circus.

At the same time, Otto’s youngest brother Wild Thing was here to visit, and Sunday was BOTH Valentine’s Day AND Nerd Night. Clearly, no matter my exhaustion, a special dessert was needed. Something… luscious. Silky. Something RED. I checked the pantry; yes, one can of cherry pie filling remained. Cheesecake with cherries was clearly the answer. 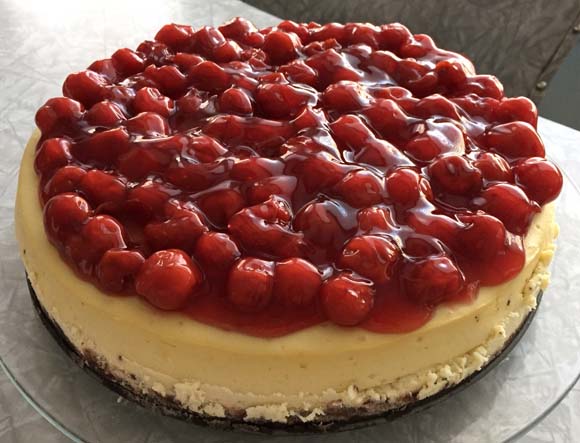 It’s beautiful, right? Everything a cheesecake should be. It took all of my willpower not to dive face-first into that beauty.

However: normally I bake on Sunday mornings (because the kitchen is my church, and I know it’s blasphemy to say that out loud in the south, but oh well) for the game that night, but I knew cheesecake would need overnight chilling, so I decided to bake on Saturday night. CUE THE OMINOUS MUSIC.

So, Saturday night the boys headed out to Go See A Band, because Wild Thing is young and hip and Otto wishes he was young and hip. We bid them farewell and figured they wouldn’t be back until the next day. (We were right. And Otto’s answer when I asked how the evening went was, “It was really loud.” He didn’t SAY the band should get off his lawn, but it was certainly implied.) Never mind that I was still exhausted, never mind that I started baking about an hour before I normally go to bed… it would be fine.

I started with this recipe, which I’m certain is a perfectly good recipe with zero modifications. The directions are clear, the proportions make sense, etc. Because I am me, however, I did modify it just a little.

1) I made my crust out of chocolate graham crackers instead of plain ones. I’M A REBEL.
2) 8 ounces of graham crackers to 7 tablespoons of melted, unsalted butter is silly. What is anyone going to do with a single tablespoon of unsalted butter that’s left over?? Exactly. I used about 9.5 ounces of crackers and the full stick of butter.
3) I always add a little cornstarch to cheesecake because I think it helps keep it from cracking. So with this recipe, I tossed in a teaspoon for the final batter mix.
4) I should write a cookbook, and that cookbook will be called “Mir’s Recipes Which She Meant To Make As Written But Then Had To Change Because She Ran Out Of Stuff.” It will be a best seller, I am sure. It will feature this cheesecake recipe with the note that it calls for 2.5 cups of sour cream and I discovered I only had 2 cups. Whoops. I tossed in an extra egg, instead. It was fine.

Here is where I confess to you that I’ve made, oh, I don’t know… maybe a dozen cheesecakes in my lifetime. I actually LOVE cheesecake, so I’m not entirely sure why I don’t make it more often (maybe because I love cheesecake but I love fitting into my jeans more?), but cheesecake is a little fussy, man. Also it’s not exactly health food. Anyway. I hadn’t made a cheesecake in a REALLY long time, and as soon as I got to the part about cooking it in a water bath I remembered that perhaps PART of the reason I don’t make them more often is because I AM CLUMSY and a water bath seems like an invitation to disaster. Nevertheless, I persevered, and when it came time to pop this baby in the oven, I had hot water available from melting my white chocolate, and I oh-so-gingerly poured it into my roasting pan, did NOT splash the cheesecake, and got the whole thing into the oven in one piece.

This recipe calls for about an hour to bake in the oven, and then—and I had somehow missed this when reading through, originally—ANOTHER HOUR with the oven turned off, but the cake left in there. Um. I really wanted to go to bed when the first hour was up. But I could not! Because cheesecake! I waited the additional hour, during which even Chickadee (our resident nightowl) went upstairs. I opened the oven at the appointed time, and… angels sang. A bright light shone down from heaven. This was the most beautiful cheesecake I’d ever made. There were no cracks. The top was domed and uniform and ever-so-lightly browned. It was a thing of beauty.

Gently, oh so gently, I pulled my water-bath-containing roasting pan and the cheesecake within it out of the oven and set it carefully on the stovetop. I had done it. It was nearly midnight, but I’d baked the perfect cheesecake. Nothing had gone wrong. All I had to do was get the cheesecake out of the bath and stick it in the fridge.

(That ominous music is still playing, by the way.)

Again, SO GENTLY, I lifted the cheesecake out of the water bath and placed it on a clean towel on the kitchen counter, because my foil-wrapped springform pan had been sitting in a water bath, you see, and I knew it needed to be dried. I peeled back a piece of tinfoil and… found a little water. Hrm.

Because I’m me, I had wrapped the pan in several layers of tinfoil. The last thing you want is the water getting INTO the cheesecake. It wasn’t clear to me from the bit of water I found if it had been there all along, if I had somehow gotten it in there while removing the cake from the bath… really, it didn’t matter, I knew that. But at the same time, I made the executive decision that the foil had to come off before the cake went into the fridge, just in case. I began to peel the foil from the sides of the pan, and then came the point where all that was left was to lift the pan from the foil, set it on a plate, and put my masterpiece in the fridge.

I WAS SO CLOSE. I lifted the cake straight up…

… and straight into the protruding handle of my toaster oven, as I’d been doing this cake-wrangling right in front of that particular appliance.

The pan hit the handle. The entire cheesecake jolted and I lost my grip. For a terrible second that stretched out into eternity, the cake bobbled and fell, and—VICTORY!!—I caught it just before it toppled head-first back into the water bath. ALL WAS NOT LOST.

But. Um. I may have cried a little. 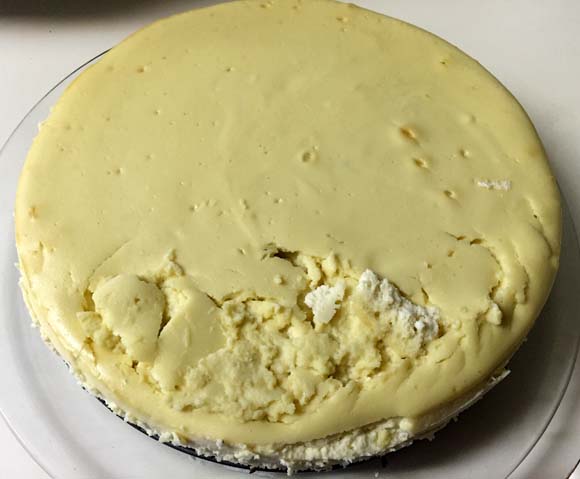 Please believe me that PRIOR TO MY STUPIDITY it had been the most beautiful cheesecake in the history of cheesecakes. Honest. And as I sat there with it, sniveling a bit, trying to smooth the broken bits back into the craters, I tried to remind myself that it’s not about how it looks but how it tastes. But. BUT.

I got it into the fridge and cleaned up a little. Then I went upstairs to see if Chickadee’s light was still on. It was.

“I dropped the cheesecake,” I said. In response to her horrified look, I added, “It’s not ruined, it’s just… damaged. It’s pretty ugly. The top is all messed up.”

My sweet girl, no doubt relieved that there would still be cheesecake, got up and enveloped me in a big hug. “It’s okay, Mama. I’m sure it tastes great. Plus aren’t you gonna cover it all up with those cherries, anyway? No one will even know.” I thanked her for her kindness, and I felt a little better.

The next morning, I unmolded it and spread out the cherries. She was right; it looked fine, and if anyone noticed the carnage, no one said anything.

Make this cheesecake. But don’t take the tinfoil off near your toaster oven. You’re welcome.