Y’all. I am so tired. I am so tired I’m saying “y’all,” which I’m pretty sure is a felony for a yankee like me regardless of how long I’ve lived in the south. This past week was absolutely nuts and wonderful, and I am looking forward to telling you all about it… probably tomorrow or Wednesday, once I’ve gotten my head back on straight. Being in The Vagina Monologues is always simultaneously exhausting and exhilarating, and I don’t know if you know this, but I am not quite as young as I used to be. (Weird!) Anyway. All of the highlights about that are coming, I promise (complete with a tale of surprise my family sprung on me that made me shriek like a little girl). Please be patient with me.

In the meantime, Nerd Night waits for nothing, not even our final Sunday matinee, so yesterday morning I raced around like a crazywoman making this cake for my favorite nerds: 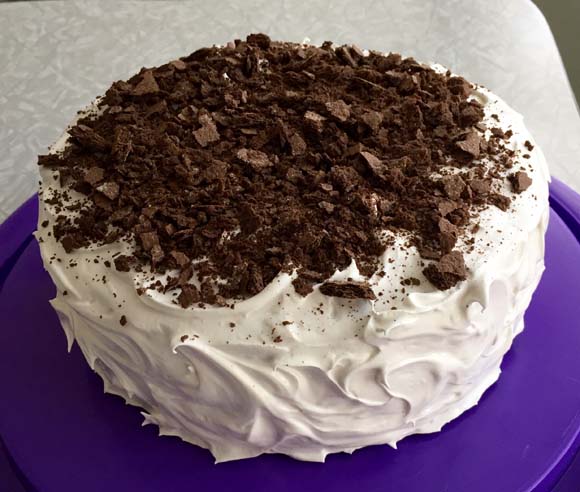 I’m glad it started out so pretty, because it did not stay that way.

So, the thing is, I realized we had some graham crackers in the pantry, and because my children are no longer toddlers, no one actually seems to snack on those, or anything (I can’t even remember why I bought them… maybe to make actual s’mores at some point??), so I started Googling for s’mores-ish recipes, and there seemed to be two genres: The first is all manner of no-bake, Cool-Whip-including, “icebox cake” type things, and the second was an actual “graham cake” made with graham cracker crumbs instead of flour.

Here I must admit that the second option sounded completely disgusting to me… but also intriguing. Also, did I mention the tired? I went with a s’mores cake recipe calling for pulverized graham crumbs. This is the recipe I used as a base, although I knew right from the outset that the proportions weren’t right. A true s’more experience requires a SUBSTANTIAL middle chocolate layer, right? I wanted to use that recipe because it 1) made cake out of graham crumbs (DARK MAGIC) and also 2) had straightforward instructions for a homemade marshmallow fluff frosting, but this nonsense about “sprinkling mini chocolate chips” was clearly wrongishly wrong. NOT ENOUGH CHOCOLATE.

So: I followed that recipe… but I ALSO took out my round cake pans and mixed up a box of Ghirardelli brownie mix plus a couple of handfuls of extra chocolate chips, first, and made two “brownie layers.” (I did this because I only wanted a thin layer of brownie for the center of my s’mores cake; the kids are now getting the other layer as brownies in their lunches this week.) Pro tip: If you decide to do this, USE A PARCHMENT PAPER ROUND IN YOUR PAN to ease removal of your thin brownie layers. I forgot to do this and one brownie layer came out in chunks and the other was… mostly solid but not pretty. Whoops!

After the brownies, I made the cake as directed, and because I was inserting an extra layer AND because I believe COPIOUS marshmallow-y-ness is central to a good s’more, I made one-and-a-half as much frosting as called for in the original recipe. Once all the cake and frosting was done, I layered graham cake, frosting, brownie, frosting, graham cake, FROOOOOOOOSTING (I had a lot of frosting), and then topped it all with some chocolate graham cracker crumbles. IT WAS REALLY PRETTY AND I WANT CREDIT FOR THAT, because I asked Monkey to take a picture once they cut into it, and this is what I received: 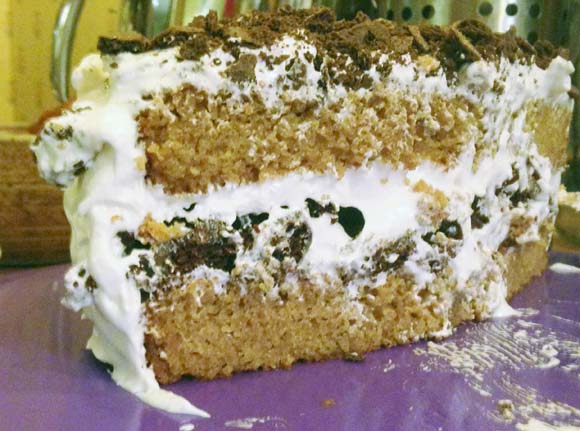 It’s, um, a little melty here. I may have forgotten to tell them to put it in the fridge. But Monkey loved it, and Chickadee said the graham cake was “a little weird but it’s pretty good,” so… win? I’m calling it a win. Besides, s’mores are supposed to be messy.