I’m still trying to decide if baking decadent things I cannot eat is a healthy sublimation of my sweet tooth or just a giant, masochistic flaw in my reasoning process. Best not to think about it too much, I suspect.

The smoothie cleanse I mentioned last week? I’m going to tell you more about it, today, but after I tell you about dessert. So if you’re just here for dessert and don’t give a rat’s ass about my weird diet things, check out the cake and then be on your way. Here I was, having just come off 10 days on kale smoothies and eating… mostly veggies, still, and it seemed like a great idea to make a decadent chocolate cake. With a berry filling. And a cream cheese filling. And chocolate fondant. Why not? 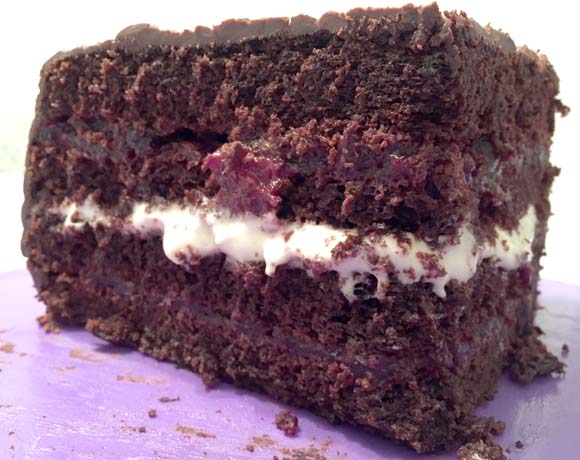 It turns out that it’s kind of hard to get a good picture of a dark chocolate cake with a dark berry filling, but this is, in fact, a 4-layer cake with one layer of gooey cream-cheese-y filling and two layers of mixed berry compote. I’m told it was delicious.

There are Sundays when I’m busy and I actively search for an “easy” recipe, and then there are Sundays when all I want to do is spend a few hours in the kitchen. Yesterday was one of those latter days, hence the choice of a rather fussy recipe with lots of steps. I used this recipe from Jo Cooks and the only change I made was to use a good dark chocolate for the ganache rather than chocolate chips. It kept me busy for quite a while. 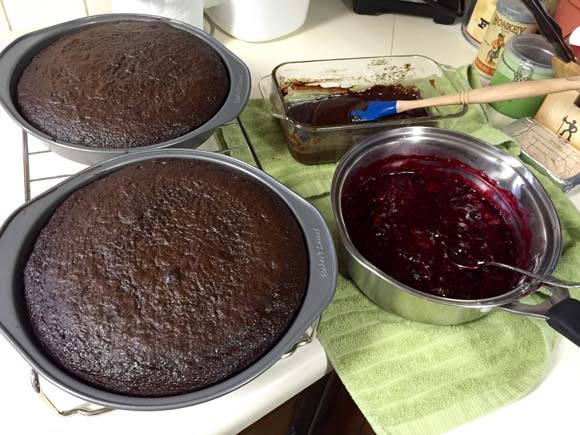 (Make batter! Bake cake! Make compote! Realize I don’t own a double boiler and rig up a glass loaf pan in a pot of boiling water to make the ganache! Breathe a sigh of relief that I didn’t end up sinking the ganache in the water!)

Oh, I made one other change, too—I don’t know if I need a different kind of flat spatula (Ruth? I bet you could tell me what I’m doing wrong) or if I’m just terrible at making things even, but I couldn’t get a nice smooth finish on the ganache like I wanted, so I decided to mess it up on purpose. 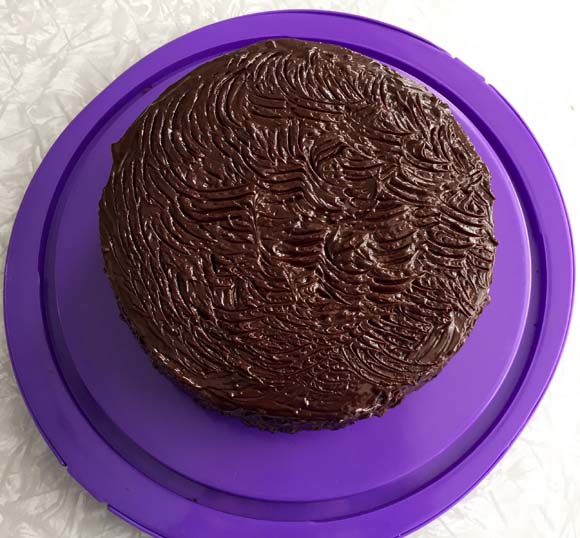 The best thing about this cake is that you have to trim the rounds flat before splitting each one into two layers, and then there’s extra fruit and cream cheese goo, so the kids have little mini-trifles in their lunches today of cake scraps and toppings, which means that for five glorious minutes midday I’m the greatest mom EVER.

Okay! Time to talk smoothies. Specifically, this book: 10-Day Green Smoothie Cleanse. It’s a New York Times bestseller and the author is a nutritionist, plus a friend of mine was raving about how great it was, so I decided to try it.

I have been half-heartedly trying to get healthier for… a while. I’m exercising more. And sometimes I watch what I eat, but honestly I eat too much, and I know I eat too much, and also I love healthy foods but I also love delicious SUGAR and FAT. The few times I’ve buckled down and really been conscientious about good choices, lately, the scale hasn’t budged. This is depressing, and makes me want to eat lots of comforting sugar and fat until I am less depressed. So I thought a strict plan like this would be a good jump-start for me.

I did it, totally by the book, and I lived to tell the tale. The first three days were awful, but it got better from there. Basically you mix up a giant blender of green smoothie (tons of greens and fruits) each morning, then divide that out for your three meals, and you can snack on allowed items in-between smoothies (raw veggies, fruits, hard-boiled eggs, nuts), and you drink a LOT of water and herbal tea, and by the end of your ten days you can supposedly lose up to 15 pounds.

Part of me is super annoyed that I didn’t lose 15 pounds, and the more rational part of me is aware that I’m not a terribly large person and that’s a ridiculous expectation given my starting weight (which was higher than ideal, but certainly not obese). I ended up finishing the ten days with a nine pound loss, which was pretty miraculous, all things considered. It’s been YEARS since I was able to manage any sort of substantial loss, no matter what I tried. So that’s awesome. Less awesome is the fact that I started off losing very quickly, and by the end I could see the scale leveling out even though I was still consuming very few calories. (This is the miracle and joy of being BOTH post-menopausal and having a thyroid condition. Um. Yay?)

The smoothie part is dictated by the book and somewhat uninteresting (to me), I think. Possibly more interesting is what I’m doing now that I’ve “finished” the course. It’s been about a week, and I’m taking the smoothie recipes from the cleanse and making a half-batch each morning. I set aside the “normal” meal allotment for my lunch, have whatever’s left with my coffee (HOORAY FOR BEING BACK ON COFFEE) for breakfast, and then I eat dinner with the family. In addition, I’m sticking to tons of veggies—I actually haven’t had any meat since I started this, and I find myself not missing it as much as I thought I would—and no dairy, for now. The cleanse seemed to break a lot of my cravings for all of those delicious things I shouldn’t be eating, so I’m just going to stick with all this “clean” eating for as long as I can stand it.

I’m still exercising, and even back on “real food” I am eating significantly fewer calories than I was before, and… I don’t think I’ve lost any additional weight. Maybe another half pound or so. That’s frustrating. My metabolism is confused. BUT! I feel good—my skin is clearer, I have more energy, I don’t have sugar cravings, etc. This is “good” for me even if my weight doesn’t shift. But I’d be cool with losing another 10 pounds, is all.

In the meantime, I shall continue to bake things for other people. Because SOMEONE should get to have a sugar coma.