Sir, that is not how you (but you do)

I don’t want to alarm everyone (LIES; I would like you to please be just as alarmed as I am), but it appears that my youngest precious babykins is now officially 16 years old, which is impossible, because I just gave birth to him a couple of years ago. Clearly there is some black magic at work here, and I would like it to cease and desist immediately.

Part of this is my fault. Well… technically it’s all my fault (Parenting! Because guilt is forever!), but one particular part of it is especially my fault. Remember when Monkey skipped a grade? That seemed like such a good idea at the time. Blah blah blah appropriate academic challenge, blah blah blah more mature peers, blah blah blah HA HA HA MOM YOU FORGOT THAT GIVES YOU ONE LESS YEAR WITH YOUR KID, DUMMY. So: my fault. Also my fault that somehow it never occurred to me that we would spend the better part of this year getting Chickadee ready to launch and then once she’s out of the house we’d have to turn around and do it all over again RIGHT AWAY with him. Or, more specifically: We’d be spending a lot of time this year saying, “We need to do XYZ with Chickie. Heck, let’s go ahead and do it with Monkey, too, because he’s only a year behind.”

Chickadee got luggage for Christmas. (MERRY CHRISTMAS, GET OUT!) Monkey got his own set this morning for his birthday. (HAPPY BIRTHDAY, GET OUT!) (And then I bit my tongue because NO NO DON’T GO YOU’RE NOT READY. Mmmmmph.) This afternoon we are headed to the bank to open his first checking account so that he can blow his birthday money on fast living without having to clear it through me. (Fast living = online gaming and D&D manuals, of course.)

Some things stay the same. The request for homemade cinnamon rolls for birthday breakfast, for example. 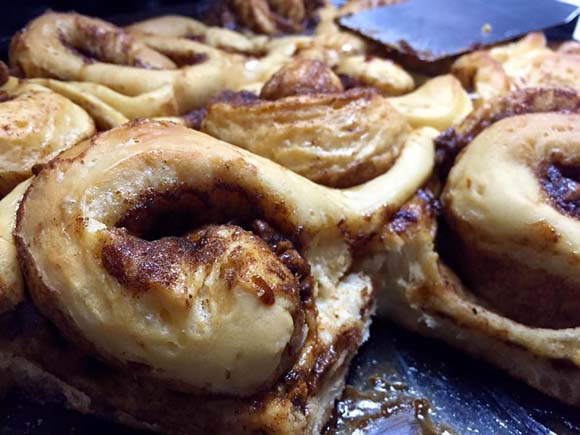 With cinnamon chips and no nuts, please and thank you.

I mixed up a double batch of the frosting, and just dolloped it onto the cut rolls with abandon rather than glazing in the baking dish. Monkey’s grown so fast this year, he’s skinnier than ever, and if I can get him to eat these rolls slathered in frosting every morning for a while, maybe his newly tall frame can reclaim a little padding. That’s a responsible parenting strategy, right? No? Here, shut up and have some frosting.

The indecision over tonight’s dinner, also the same. “Well, what do all of you want?” Dude, it’s YOUR birthday. I love that you are always so concerned for everyone else. But today is everything you want. It’s okay. Your tender heart will withstand a day of you calling the shots, I promise.

So much is different, though, too. He’s all teenager, all “I’m busy with my friends right now” and “just a minute” and “do I have to,” but in the best possible ways. He swoops in for a quick cuddle (still) but then disappears for hours, not isolated, but in a world with his peers where we are outsiders. And that’s as it should be.

Driving remains the current frontier of uncertainty. It’s as if he knows that once he masters that, there’s no going back. Childhood will be behind him, and with a later departure and slower pace than the majority of kids his age (most of them couldn’t speed forward fast enough, right?), he’s not sure he’s ready. We’re not pushing it, of course… just reminding him that practicing will make it less scary. (He, in turn, reminds us that he needs to wash his cat rather than practicing driving.)

There are still plenty of terrible puns and pratfalls and other silliness, and while the fancy new gaming headphones to go with his fancy new computer might’ve been his actual favorite gift, that didn’t stop him from creative usage of the case they go in. 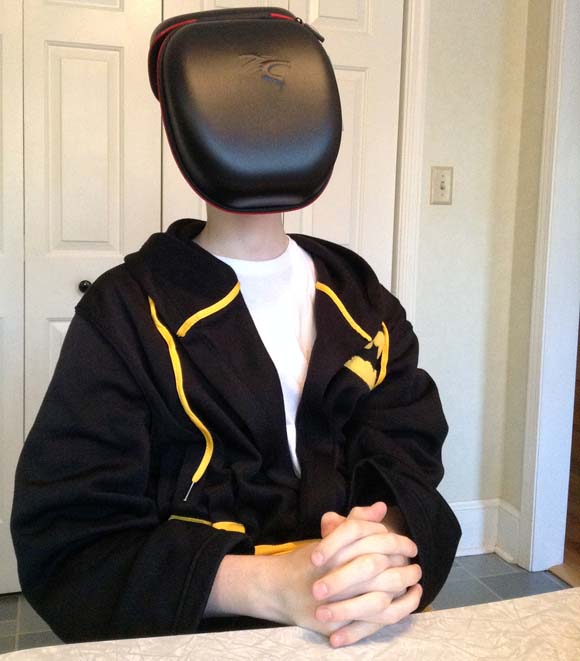 “THAT IS NOT HOW YOU!” his sister hollered at him, while Otto and I giggled and snapped pictures. But that is absolutely how he (yes, I know, English, HOW DOES IT WORK?), and that’s just fine by me.

Happy 16th birthday, kid. Nice hat. You keep doing you. It turns out that you are pretty damn great. (P.S. I love you. P.P.S. PICK UP THE DIRTY CLOTHES OFF YOUR FLOOR ZOMG.)