Thanks for the recipe feedback—it’s a go, I’ll now be sharing whatever I send out the door on Sundays when my lovely nerdlings meet up with the rest of the Nerd Herd for a night of RPG shenanigans punctuated by a diabetic coma. Our friends provide dinner and the game leadership, I provide dessert, and my teenagers provide the incessant bickering. (Win/win/no comment.)

This weekend I baked for two days straight, seems like. I like to send buckets of cookies to the teachers before Winter Break, and that cannot be accomplished by baking Thursday night; I start the weekend before, prep and freeze doughs, etc. The LOGICAL thing would’ve been to send some of those cookies to Nerd Night. But because I am me, I spent two days baking cookies and then thought to myself, “Self, it’s Nerd Night. LET’S BAKE A CAKE.” 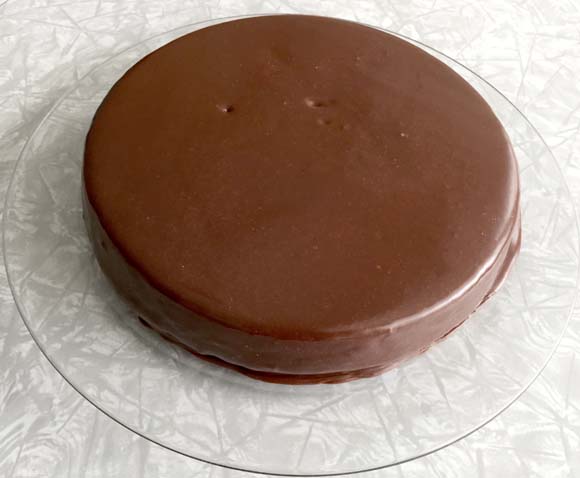 Except I’m a liar, sort of. I made two, and this here pretty one is the one I kept (because it’s smaller). The one I sent to Nerd Night was… less pretty.

This is the one I sent: 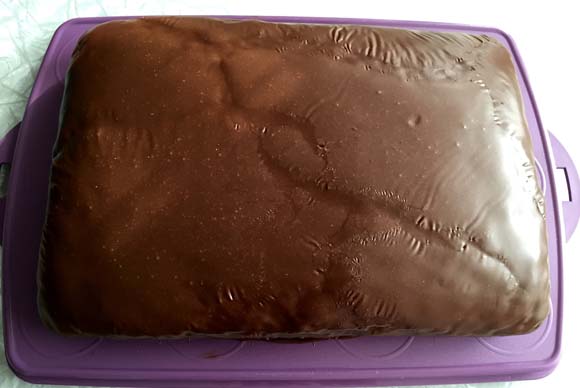 See? Not so pretty. Turns out that this glaze I made is delicious but sets up really fast, and I didn’t do such a great job on the main cake. Luckily on the round one I knew better (and could also just spin the plate beneath my spatula).

Anyway, here’s the background and the recipe:

I decided to make a cake, in part because I had some Sad Bananas(tm) begging to be used up, but I was also low on white sugar (see also: baking cookies for days). I started looking for banana honey cake recipes and came across this Williams-Sonoma recipe, which makes a 9″ square cake. The recipe itself was a good starting point, but I knew I wanted to make a full 9″ x 13″ pan, and also that doubling the recipe would be more than I needed. The solution? A doubled (and tweaked) recipe, made into a full pan cake and then just an 8″ round as kind of a bonus cake. 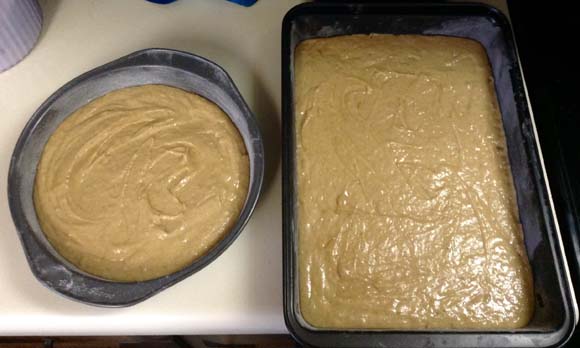 If you compare my recipe to the original, you’ll see I ditched the nuts, added some ginger, substituted some coconut oil for part of the butter, and reduced the fat overall by a bit (I find that when you use coconut oil in place of butter, you can use less), as well as going with a slight egg reduction in favor of more bananas. And then once the cakes were done I invented the glaze because what is better than Nutella on bananas (answer: NOTHING)? Exactly. Enjoy!

BANANA HONEY CAKE (adapted from the above-linked recipe)
[Makes a 9″ x 13″ full pan cake and a bonus 8″ round.]

Prepare
Preheat oven to 350 degrees; when I am baking more than one pan, I like to use the convection setting on my oven, but you don’t have to. If using a conventional “bake” setting just be aware that you’ll want to rotate your pans (I just typed “pants” and almost left it that way… ROTATE YOUR PANTS!) partway through. You could also easily experiment with pan sizes, I just happened to go with the 8″ round and the 9″ x 13″ rectangle. Butter and flour whatever pans you’re using and set them aside.

Make the batter
Stir together all dry ingredients (from the flour to the salt) in a bowl and set aside. Mash the bananas and add a splash of orange juice (prevents browning and kicks up the flavor a little) and set aside. In your stand mixer with paddle attachment, cream together the butter, coconut oil, and brown sugar until creamy. Add the honey and beat until well-blended. Add the eggs and increase the speed to medium-high and beat until smooth. Pausing to scrape down the bowl as necessary, you’re going to add half the flour mixture, beat, half the bananas, beat, the remainder of the flour, beat, and then the rest of the bananas. Eat beating should be done on medium speed and just until ingredients are incorporated.

Bake
The original recipe calls for a single pan in the middle of the oven. I put the larger pan in the middle and the small round one rack up, and I did not rotate the pans because I was using my convection setting. Keeping in mind that convection also tends to cook a bit quicker, my round was done in 30 minutes and the big pan was done in 40. (Insert a toothpick into the center of the cake to test; it should come out mostly clean, with maybe just the tiniest of crumbs.) Cool the pans on wire racks for at least 30 minutes, then turn out of the pans and cool for another hour before glazing. 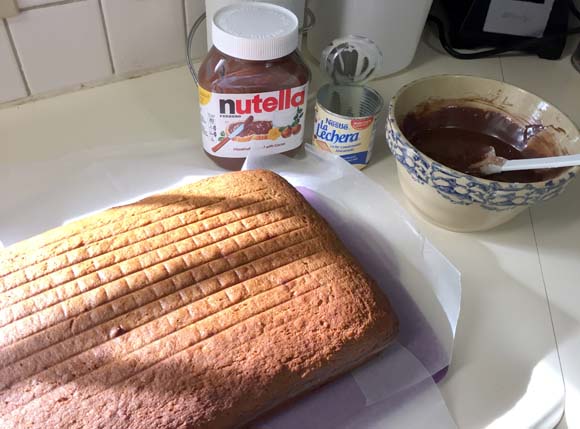 Glaze
In a microwave-safe bowl, combine the sweetened condensed milk and Nutella. Heat in the microwave for about 30 seconds, stir, and do another 30 second or so to heat it to where it will fully incorporate. You don’t want to burn it, but you want it pretty warm. Sift the cocoa and powdered sugar into the warm mixture and stir well. (Sifting prevents lumps. Also, I added the cocoa and powdered sugar to give this mixture some more body, but I’m guessing if you don’t mind the glaze a little runny, you could skip it.) As my Frankencake picture up there demonstrates, this glaze sets quickly, so either reheat while you’re glazing or work fast.

The Verdict
The cake carrier came home empty. Chickadee sent me this picture: 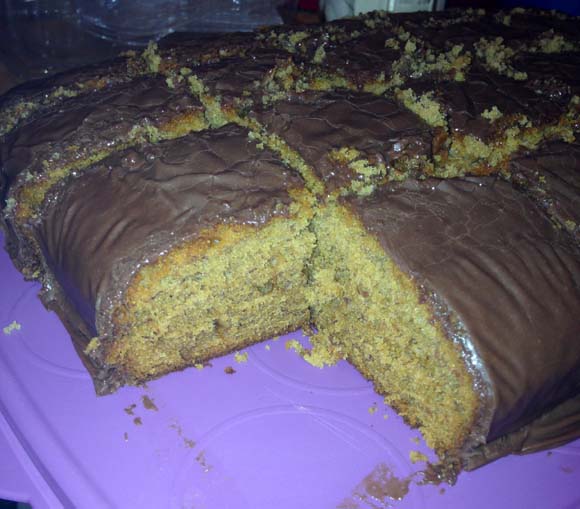 I asked the kids how the cake was when they got home.

So there you go. Nerd-approved!