Someone asked me the other day how long I’ve been gluten-free, and I couldn’t remember. I ended up sounding like a complete moron, I’m sure (this would be different from the hundred other ways I normally sound like a complete moron…), with my response of, “Oh, you know, a bunch of years? Maybe 4 years? Wait, 5 years? 3 years? I MISS REAL PIZZA.” [I just looked it up. 5 years!! Whoa.]

It’s been a long time, is all. And I feel better and my skin isn’t falling off anymore and so that’s all great. I appreciate not being a giant wad of eczema.

In the beginning I tried my hand at various wheat-free substitutes, and spent a lot of money on the gluten-free versions of foods, but it became clear in very short order that:
1) Gluten-free imitations of normally gluten-free foods tend not to taste very good,
and
2) Specialty gluten-free products cost twice as much as their wheat-filled counterparts, either to buy pre-made or to make, myself.

As a bonus: 3) Anything that should be wheaty which is now gluten-free and actually tastes good is generally laden with sugar and salt and fat (yum yum) and really bad for you.

So mostly I just skip the normally-wheat-containing foods.

Yeah, I have some gluten-free pasta in the pantry, but I couldn’t tell you the last time I actually made some. I’m more likely to spoon sauce over veggies or to make some brown rice. And yes, okay, I keep an “emergency” loaf of Udi’s millet chia bread in the garage freezer (shut up; sometimes a grilled cheese sandwich craving is an emergency, OKAY?), but it’ll last me a few months, because I don’t really eat sandwiches anymore (I make a salad or roll up lunch meat and cheese or whatever). If I want a “cakey” treat, I make Forgiving Martha’s black bean cake (I do them as muffins and toss ’em in the freezer) and pretend it’s real chocolate cake. You adapt, and it doesn’t require a bunch of substitutes, is my point.

Most of the time I don’t feel deprived. I eat more fruits and veggies, in general, and it’s been like this for a long time, and it’s no biggie.

I can’t remember when it started… I think after I’d been sick for a while, and I was making myself some toast one day because it was the only thing that sounded good. Because I was sick and cranky, I was sort of ranting about the bread as I took it out and put it in the toaster oven. “This bread is stupid. Stupid bread. And tiny! It costs twice as much as regular bread and you get half as much. WHY? Do gluten-free people not deserve full-size bread? No? I guess not. All we get is TINY, STUPID BREAD.”

I stomped away from the toaster oven, and a few minutes later it beeped.

I’m sorry, good folks of Udi’s. Your bread is really quite tasty, but it will forever be Tiny Stupid Bread in our house. I mean, unless I’m toasting it, in which case it’s Tiny Stupid Toast. Obviously.

The children, in particular, can’t bear to pass up any opportunity to offer it to me. “Whatcha making, Mom? Do you want a sandwich? Can I get you some Tiny Stupid Bread??”

How do I live happy and gluten-free? I exercise, eat plenty of fruits and vegetables, get a good night’s sleep, and treat myself to Tiny Stupid Bread every now and then. I’VE NEVER FELT SO ALIVE!

This is going to sound completely unrelated, but I promise that it’s not: Let us pause here to discuss the habits of one darling teengirl creature who lives here. The same child who chose vegetarianism at the tender age of 10 because “it’s wrong to eat animals” has a little problem I like to call… printeritis. It’s wrong to eat animals, but slaughtering entire rain forests so that she can print out every damn thing she finds on the Internet is just fine and dandy. I am forever finding recipes and memes and all kinds of other papers falling off my office printer because SHE MUST PRINT THEM and then half the time she never even remembers to grab the paper.

So. Last week while Chickadee was working on some project or other while I was sitting here in my office working, I heard the printer fire up. Because I am nothing if not calm and loving, I screeched, “WHAT ARE YOU PRINTING? WHY ARE YOU PRINTING? STOP WASTING PAPER!”

My daughter regarded me as if I had twelve heads. “I need it,” she said. “I have to type this stuff into this other window and it’s easier if I just print it out and have it on paper.”

“Just open another window! Toggle back and forth! YOU DON’T NEED A PRINTOUT!” Clearly the future of humanity hinged on the single sheet of paper that had just emerged from my printer.

She rolled her eyes while grabbing her paper off the printer. “Mom! It’s easier this way and I already printed it. Chill out.” I gave her a look. A mischievous grin twitched at her lips. “I’ll draw you a picture on the other side when I’m done. Okay?”

Try to contain your shock, but after consulting the magic piece of paper for whatever it was she was doing, Chickadee left said paper in my office for several days. WEIRD, RIGHT?? And as I was puttering around this weekend I came across it and felt a fresh wave of annoyance. Chickie was stretched out on the couch, and I dropped the paper on her on my way to the kitchen. “DRAW ME A PICTURE,” I said. She giggled and promised she would.

I left her and went on to attempt a rare baking experiment; every now and then I do cave and break out the gluten-free flour mix and try to make myself something. As it so happens, my garden is starting to runneth over, and I wondered if I might be able to make some sort of gluten-free zucchini muffins that wouldn’t be terrible. I found a recipe and set about modifying it, and in no time at all the kitchen was a complete disaster area.

Chickadee wandered in and surveyed the carnage. “Ummmm… what are you making?”

“Muffins!” I said. She looked skeptical.

“What kind? None of this looks like muffin stuff.”

The mix came out… a little thicker than I anticipated. But I knew the zucchini would give up a bunch of liquid, so I figured they’d be fine. And they had very little flour and lots of fruit/veggies so, you know, HEALTHY! Also, so pretty. 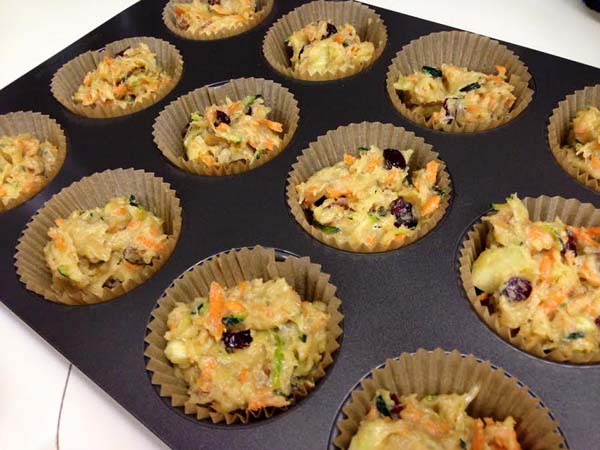 I was feeling pretty pleased with myself, frankly. I was using up zucchini, making myself a nice treat, and pretending to be the kind of crunchy hippie I sometimes wish I actually was. All good.

I peeked at the pans halfway through the cooking time, and the muffins were puffing up beautifully. I’d actually pulled it off! Healthy, gluten-free muffins that looked just like regular ones! But when the timer went off, I pulled the muffins from the oven, only to watch them deflate down into the small pucks that are the hallmark of a gluten-free baked good.

Here’s the finished product. Note that the muffin paper hasn’t been peeled at all, it’s just looking very large around the shrunken muffin: 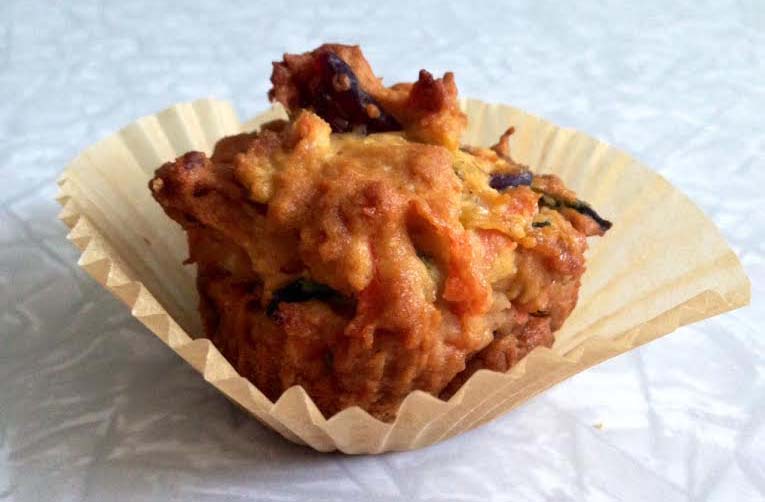 Chickadee watched me unwrap one and taste it. “How is it?” she asked.

“… tiny and stupid?” she suggested.

“Yeah,” I said. “Tiny and stupid. I grated vegetables for an hour and I ended up with Tiny Stupid Muffins.” We giggled. We watched some TV together, and then I sent her up to bed.

Later on, when Otto went to put Licorice in Chickadee’s room before we went to sleep, he came downstairs to report that Chickie was not only not asleep, she was “surrounded by pencils and pens” and “working on something.”

Moments later, Chickadee fairly skipped down the stairs, and handed me her printout from earlier in the week. “I TOLD YOU!” she crowed. “I MADE YOU A PICTURE!” 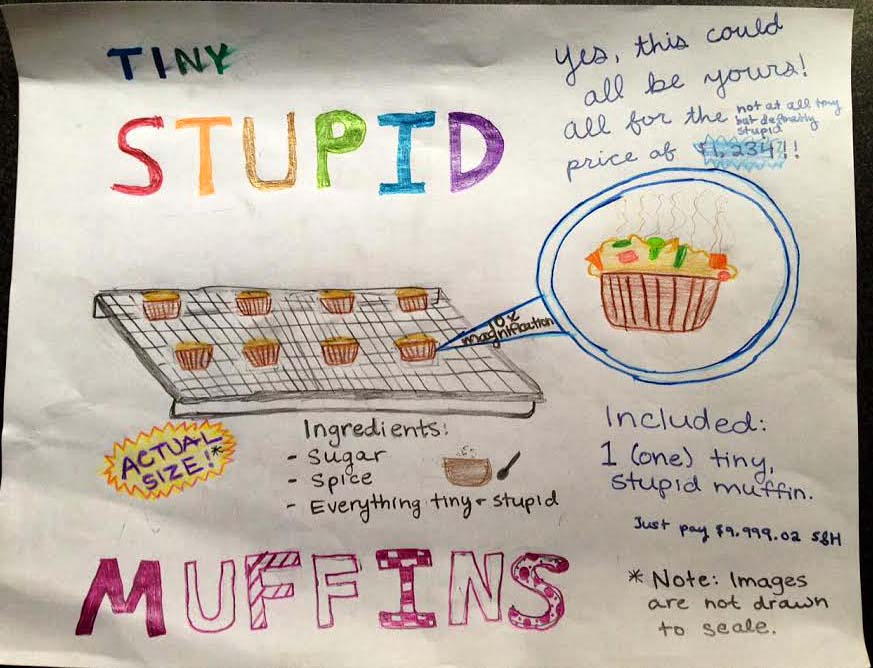 Listen, sometimes I miss eating wheat, sure. But then I remember all of the bonus entertainment being gluten-free has brought to my life. (And my office. The muffin poster is now prominently displayed, because a masterpiece like that demands it.)