Here, I brought you this snow. It melted.

By Mir
June 20, 2014
Category Aspi(e)rations/AD(D)orations | It's not a regret, it's an "experience" | Offspring: ecstasy and agony

I wanted to bring you back something awesome from our trip to Breckenridge, but I realized after we got home that I brought back… nothing, really. I mean, I remembered the kids, but to be fair, we’d brought them with us in the first place and I figured the people renting out the house we stayed in might be mad if we left them behind. I managed to buy my children 0 souvenirs from our super fun family vacation week. Zilch. Nada. I DID want to buy them a couple of I GOT HIGH IN BRECKENRIDGE t-shirts that we kept seeing everywhere (it’s nearly 10,000 feet, you know), but for SOME reason Otto kept vetoing that and giving me a funny look whenever I said it. I can’t imagine why.

Weeks before we left, my parents suggested to us that we look into getting some altitude sickness medication to bring with us. Apparently there’s something available by prescription, and I agreed that that was a good idea, meanwhile thinking to myself, “Medication? Does it bring you closer to sea level? How does that even work??” Also I then got distracted by all of the work I needed to finish before we left and the fact that (stewards of awesome timing that we are) we ended up purchasing Monkey some new bedroom furniture just days before we departed and that meant an evening spent assembling and moving things and selling his old bed and then the countless bewildering discussions between my youngest and me where he insisted that he loved his new furniture and wasn’t bothered by the change at all, but could I please just get him exactly the same bedding (y’know, the bedding that is only available in twin size) OR allow him to continue using the current twin sheets/blankets on his new full bed. Because that’s logical. (Autism! Motto: Progress ain’t linear, parents.) I got busy, is the point, and we never got a prescription, but I was sure that was no big deal.

Spoiler: We all got sick.

Listen, I’ve been to Denver a bunch. Denver is in the mountains! Sort of! I figured how much worse could Breckenridge be? Altitude sickness is like the worst hangover ever, only without the fun drunken part before the headachey, barfy part. We flew in on Saturday afternoon, and I can’t tell you what happened on Sunday. We laid around like wet, miserable dishrags, mostly. And slept. And bummed some magic altitude sickness pills off my dad.

By Monday, we were human again. At least, I thought we were. I may have underestimated Monkey’s… acclimation. Remember how Monkey never actually complains when he’s sick, or if he does we automatically assume he’s dying? After those initial altitude headaches he didn’t complain, but he was noticeably off. Just the dryness of the air and feeling fatigued/short of breath can wear on a person, of course, as well as the stress of being in an unfamiliar environment without the comforts of home (autism! HELLO!). Monkey was just not himself all week. We ended up leaving a couple of group activities with him because he simply couldn’t hack them for whatever reason, and the day before we left I learned that I was a horrible mother and this was a terrible vacation and pretty much everything in the world was awful. But more on that, later. Suffice it to say that my guy had kind of a rough week.

In contrast, Chickadee settled into her role as pied piper to my adorable niece and nephew, and had what was perhaps the calmest and most enjoyable week she’s had in a very long time. Things went so well, in fact, that I think we may have conned my stepbrother and sister-in-law into considering taking her as an au pair next summer for a while. (The alternative is that Otto and I figure out how to rent a small child here at home, which seems more complicated.)

The vacation part itself was awesome. My dad and stepmom rented a gorgeous house with approximately 500 bedrooms (I think) and the nicest kitchen ever, which is important because the family vacations we take seem to be about 10% about getting the family together, 10% about exploring our locale, and 80% about eating until we explode. Monkey went all teenage-boy on us and picked a dark bedroom on the ground floor, in the back corner, away from any noise or people or other distractions. (We referred to it as his cave and he spent a lot of time there.) Chickadee settled into the upstairs bedroom next door to her cousins, allowing for easy access for tickle wake-ups. All of us adults had lovely bedrooms with attached bathrooms. The house was spectacular.

The owners of the house love their label-maker, I should point out. EVERY DAMN THING WAS LABELED. “Mountain plumbing is sensitive! Please only flush small amounts of toilet paper!” (Thank you?) “Please close blinds and turn off lights!” (Geez, get off my back.) “Pots and Pans,” “Kitchen Utensils,” “Use only dishwasher tablets provided,” “Spare dishcloths.” (STOP TALKING I GET IT.) Etc.

So we ate a lot. And we went on walks and hikes and the kids played in the snow in their woefully inadequate southern clothing. We put together jigsaw puzzles during the day and played games at night. Chickadee brought Cards Against Humanity and I thought my stepbrother was going to stroke out at the thought of playing this with his niece, but it was fine. And by “fine” I mean “incredibly disturbing and also hilarious.” We even lured Monkey out to play Bohnanza one night, fully knowing that if he didn’t win he might get very cranky, and he laughed and seemingly played with no real strategy and gleefully announced halfway through that he was going to win. And then… he did. We’re still not sure how that worked.

Every night we had a visitor. 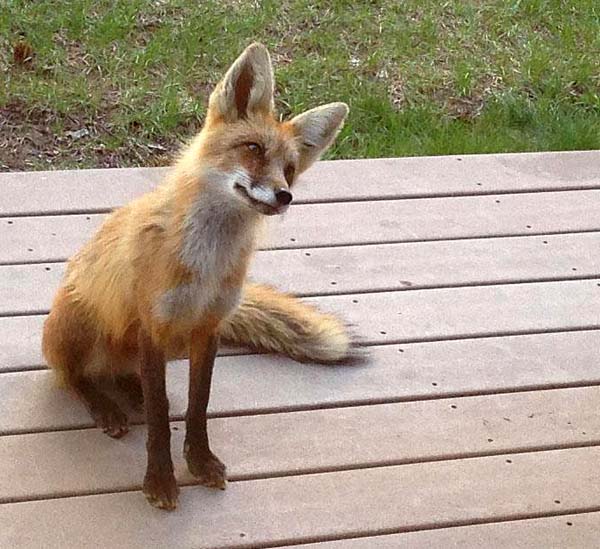 He showed up one night while we were eating dinner and stared at us through the glass sliders, unbothered even when the kids all rushed over to the doors and were within just a few feet of him. WHAT A WEIRD FLUKE, we all said. And then he just kept coming back every night. (Photo courtesy of my stepbrother. I stole it, because I’m a jerk. Thanks, dude!)

Then Chickadee looked up our rental house online and discovered that Mr. Fox is something of a fixture in that neighborhood. He became the highlight of our evenings; one night when he showed up, my brother said, “Oh, is it fox-thirty already?”

On the next-to-last night, all four children BEGGED to put out some food for the fox, resulting in long and boring lectures about the dangers of feeding wild animals, and so instead the little ones were placated by Chickadee taking them outside to pull up some grass and find some pinecones, which they left on the porch. Our fox friend showed up that night, clearly smelled the salmon we were enjoying, checked out the grass clippings spread by the door, and all but flipped us off on his speedy departure. He probably went back to the woods to tell his fox friends what selfish assholes we were.

The highlight of the trip (for me) was a bike trip we took on our last full day. You can go into town, rent bicycles, and then be driven to the top of a pass so that you can essentially coast your way to the bottom. It’s perfect for a scenic tour if you’re very lazy traveling with small kids. Up to this point, Monkey hadn’t really been able to last for a group activity, but COASTING ON A BIKE seemed about right, so off we went.

The view was spectacular. There were places where you could see the aftermath of various avalanches—the snow was dotted with mangled trees. We visited a rock garden where a variety of animals and symbols had been painstakingly constructed. We bleated at a couple of mountain goats we spotted climbing up the crags. I’ll even cop to sort of enjoying the part of the path that was flooded by runoff water; we were instructed to remove our shoes and tie them to the handlebars so that we could pedal through the shallow water. No problem! Except the water was about 33 degrees. By the time you get back to dry path, your feet are numb and your calves are tingly. It wakes you up, that’s for sure.

It took about… 3 hours? Maybe? To wind our way down the mountain and back down into town. On the last stretch of downhill part, apparently Monkey was calling to me and I couldn’t hear him—we proceeded single file, as the bike path was narrow, and it was quite windy—and this caused him to conclude that I was ignoring him. Because that’s what I do! I just ignore my kids and abandon them on a steep mountain! By the time he’d caught up to me he was apoplectic with rage, so I calmly (if not entirely lovingly; it had been kind of a long week) informed him that I didn’t feel like being screamed at, so he could catch back up with me when he was feeling a little more in control of himself. Then I rode away, which made him even angrier. Soooo… that didn’t end super well. (In my defense, Otto was right there. It’s just that he was furious with me and not with Otto, for some reason, so I made myself scarce.)

Later, when we were back and packing up, and sanity had been restored, Monkey said, “Remember how I used to say, ‘Remember that time I was two and you hit me with a snowball’?” (It’s true. Once I hit toddler Monkey with a snowball. I’m a monster. He’s never let me forget it.) I nodded. “Well now,” he continued, with a flash of dimples, “I promise never to say that again!”

“Thanks, honey,” I said, a little bewildered, but mostly touched that he realized that that sort of accusatory grudge-holding isn’t a good idea.

“NOW I’ll just say, ‘Hey Mom, remember that time YOU ABANDONED ME IN THE ROCKY MOUNTAINS?” He cackled. Honest to God CACKLED. I could hear it over the sound of my forehead thwacking against the table.

We hugged everyone and left Breckenridge, and then headed down to Denver. But that’s another story for another day. At least I didn’t abandon anyone, there.