Life! And other stuff!

Remember when I used to write here all the time? No? Huh. Me neither. But I heard a rumor that it used to be so. You know, back before life chewed me up and spit me out as a humorless husk of crankiness.

Anyway. Stuff has been happening, I just haven’t had the time to sit down and write about it because of reasons. (Those reasons include—but are not limited to—children, ice cream, pollen, chocolate, the return of Mad Men, work, trying to exercise regularly even though we all know I hate exercising, illness, laundry, fantasizing with my husband about all the things we’ll do once the kids have finally gone to jail moved out, school meetings, and shopping for groceries.) (So not kidding about the groceries thing. Seven gallons of milk a week. SEVEN GALLONS. I need a second fridge. Also a nap.)

Just how thrilling has it been? Let me count the ways!

School is almost over! That’s… nuts, right? Just a few more weeks and I will have a sophomore and a junior on my hands, assuming everyone makes it to the end of the semester in one piece. Monkey has done exactly what we’d hoped he would do, which means I think he will be raring to go next year on a full-day, regular schedule, thanks to both easing in with this half-day thing AND the fact that next year he’ll get to take the classes he really wants, like seven thousand science classes. Or something. I don’t know. Chickadee, on the other hand, is doing that thing where she insists it just LOOKS like she’s in the weeds but it all works out in the end! Or so she assures me. I have stopped looking at anyone’s grades. God is granting me the serenity to accept the things I cannot change through steadfast denial. Yay!

I can stop anytime I want to. I have very few games on my iDevices. Very few. Plus I know that I will get sucked in and so I try to avoid anything I’ve heard is highly addictive. (Case in point: I have never played Candy Crush.) But the children convinced me to try 2048 and let us not discuss how many hours of my life I have likely lost to shuffling numbers around by now. Instead, let us bask in the glow that is my having reached the 4096 tile this weekend. It’s green. I felt totally triumphant for about 5 straight minutes, and if you have no idea what I’m talking about, good for you. Never mind.

It’s summertime in Dogville! The weather is warming up and it was time to take the dogs for appropriate haircuts. This was the first tandem grooming appointment, and after I recovered from the coronary caused by the bill (weird, two dogs cost twice as much as one, CAN YOU BELIEVE IT?), I had two very naked-looking pups on my hands. 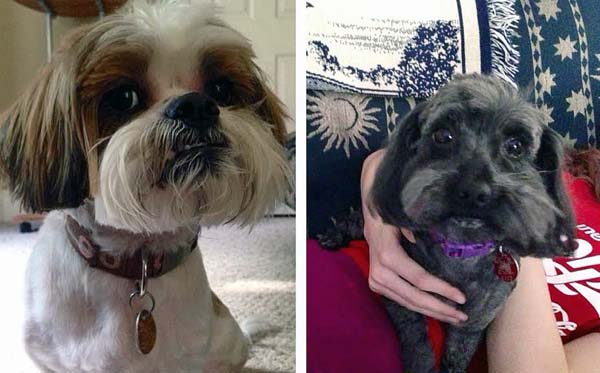 Licorice just looks adorable and tiny after clipping, I think, but as this was the first time we had Duncan really trimmed down (he was shorn pretty close when we got him, but he was also really overweight back then), I am constantly surprised at how he now looks like a tiny, disgruntled lion. Or Wilford Brimley. Either way.

But the thing is, I don’t know if the groomer nicked his undercarriage or if he just got irritated or what, but a couple of days after grooming it became clear that Duncan was… erm… doing more self-grooming than usual. In the testicular area. Or where his testicles used to be, anyway. He had licked himself raw in a small, irritated patch. That’s sad, of course, because POOR PUPPY, but also hilarious, apparently, because now when various family members feel the need to do a Duncan-voice commentary, it’s usually things like, “Hey, my scrotum is ouchie!” or “My not-balls are kind of hurting.” And in the meantime I am left trying to get in there and put salve on the affected area without him biting me or immediately licking it off, so yeah, I have been spending a lot of quality time with my dog’s oozing scrotum. Try not to be jealous. (It is getting better now, thank goodness, because the next step was going to be a cone, and if you think he looks pissed off NOW, I really wouldn’t want to see how that goes.)

It’s garden season! Because I don’t have enough to do (hahahahahaaaaaaaaaaaa!) and because my idea of “saving money” on summer produce is to spend hundreds of dollars and hours on my garden rather than just getting up early on Saturdays to go to the damn farmer’s market, yesterday I commenced with the annual ritual of spending too much time at the garden center, following by half a day of sweating and swearing while I get everything planted. It’s very cathartic, actually. This year in the interest of motivating the children, I offered CASH MONEY PAYMENT for assistance outdoors, as the dog poop does not pick itself up, the pine straw does not spread itself, and weeding/prepping/planting does take some doing. I set out tasks for my darling children as well as our bonus child who is here, well, all the time. (Did I mention I have a third kid? Probably not. Surprise!) Monkey picked up approximately three fossilized pieces of dog crap before declaring that he was going to hurl, Chickadee spent most of her time fetching water and spraying people with the hose, and Bonus Kid hauled bales of straw and bags of dirt and spread all the straw and just generally worked hard. GUESS WHO GOT PAID! (Hint: No one who used to live inside my body.) GUESS WHO’S REALLY MAD AT THEIR MOM! (Hint: Not Bonus Kid!)

Addendum: This year I am trying beets along with our standard tomatoes/eggplant/beans/peppers/cucumbers fare. I know, I know; you hate beets. You think they taste like dirt. I love beets, so probably they will either not grow or will be eaten by pests. We’ll see.

So, you know, all kinds of busy. I would love to stay and tell you more, but we’re out of milk, so I should probably go get some before the natives return from school and start bitching about it.