Sometimes I am a delightful jerkface

By Mir
March 28, 2014
Category Haven't been hit by lightning yet! | Offspring: ecstasy and agony

I think I have discussed here before a certain… shall we say… philosophy difference in parenting between myself and my children’s father. Said difference manifests in a hundred different ways, but one of the most frustrating for me has been—and mind you, we’ve been divorced for ELEVEN FREAKING YEARS—this pervasive feeling that, as the custodial parent, I do most of the “hard” stuff and he gets to do the “fun” stuff. This is not a problem unique to us, of course. But as someone who really enjoys giving gifts to people I love, it has been a small but sharp point of contention all this time that I’ve essentially been unable to give “good” gifts to the kids since the split. Because the other person in this equation 1) buys stuff for them constantly and 2) is willing to spend way, WAY more money than I am.

This is perhaps a silly thing to get annoyed about, and I know that, too. Also, things have changed over the years, and that whole mythical “figuring out some basic truths about the way different people move through the world” thing that everyone told me would eventually come to pass is happening now, and so the sting of “I never get to be the hero” has lessened, of course. Still: Every electronic or “big” treasured thing my children own did not come from Otto and me. And that’s fine, but it can make occasions worthy of present-giving kind of challenging.

It’s fun to give someone something that makes them happy. I like to make my children happy. Lord knows I don’t get a lot of opportunities to balance out the “WHY ARE THERE DIRTY SOCKS ON THE COUCH?” and “ARE YOU TRYING TO FAIL THIS CLASS OR CAN YOU JUST NOT BE BOTHERED?” moments.

This is more of an issue with Chickadee than with Monkey. Monkey thanks me for picking him up from school every day; sometimes he puts a hand on my arm and thanks me for being his mom and doing everything I do for him, and because he doesn’t have a scheming bone in his body I know this comes from a genuine place of love and awesomeness and then I offer to buy him a pony. (Him: “What would I even DO with a pony?”) Chickadee, though, is more a classic teen. Gratitude is more fleeting, and in general she believes her life to be difficult and her parents to be monsters. In many ways her life IS difficult, so it’s hard to fault her for that part, but I do dream of someday being downgraded to merely a pain in her ass.

Anyway. Gifts! My darling daughter is turning 16 this year; in just a few weeks, actually. Would it be another year of ho-hum small gifts from Mom and Otto while Captain Spends-a-Lot sends along the REAL gift? Probably. I was resigned to it.

But back around Thanksgiving I happened to stumble across The Perfect Thing, and best of all, it would be a SURPRISE. I would totally win at Birthdaying, this year. (Not as a matter of competition with her dad, you understand, but in terms of delivering on something I knew she would, without a doubt, love and remember.) A quick consultation with Otto and the deed was done. I made myself a reminder on my online calendar because I was making a purchase in November for something happening at the end of March, and I knew I’d probably forget.

Well. The end of February came and went and it was time for me to take down the Big Paper Calendar in the kitchen and write out all of our appointments and such for the month of March. I put down all of the school-related things, all of the doctors’ appointments, all of the usual stuff… and then I put a TEENY TINY smiley face on the square for March 26th. In YELLOW. You could barely see it, really.

“Mom. Hey, Mom!” Chickadee called the day after I put the calendar back in its spot, all decked out for the month. “What’s this smiley face on the 26th?”

I pretended to consult the calendar in confusion. “I have no idea,” I said. “Maybe something good is happening then.”

And so it was that for 25 days I endured a daily barrage of questions about what was happening on the 26th. One day the 26th had, in addition to a small smiley face, a big arrow with only the comment, “WAT?!” underneath it. A few days later, smiley faces appeared on every single day in March. About a week after that, the smiley on the 26th had grown angry eyebrows and a handlebar mustache.

Finally, about a week before, I answered this question by telling Chickie, “I dunno, but you have plans. Make sure you’re free and your homework is done.” This made everything about a thousand times more unbearable, because The Queen Of Control Issues didn’t LIKE not knowing and what if I was taking her somewhere AWFUL and why wouldn’t I just TELL HER. The anxiety went all the way up to 11, and I’m not going to lie, I started wondering if this had been a terrible idea, to try to plan a surprise.

I then schemed with a couple of her friends and although they were sworn to secrecy, she knew that they knew something and it was driving her INSANE.

A couple of days before, there was a difficult moment over… something… and she added to the litany of whatever she was complaining about that “… and I don’t know what’s happening on Wednesday and it’s STRESSING ME OUT!”

I kissed her on the cheek. “It’s something good. Stop worrying. Let me do something nice for you, please?” She stomped off.

The 26th finally arrived. “What should I wear. Can I wear this? Are you wearing that or are you changing? What time are we… doing whatever we’re doing? WHAT IS GOING ON?”

“HAVE A NICE DAY AT SCHOOL!” I called, shoving the children out the door. “SEE YOU LATER!”

After school we rounded up the friends who knew what was going on, and the car fairly vibrated as we drove. “TELL ME,” Chickadee demanded. “WHERE ARE WE GOING??” We all shrugged and I kept driving.

We parked and I led the way to a diner for dinner. Among the specials of the day was a strawberry nutella milkshake, so the kids all ordered those. Finally, it was time.

I took an envelope out of my purse and handed it over, while taking video of the transaction. I can’t share the video, because—as you know—my children are in the Witness Protection Program, but here is a scintillating recap of the exchange:

Me: Today is your birthday.
Her: Really.
Me: Yup! See, it says right here—
Her: Uhhh…
Me: —it says right here that it’s your birthday!
[I had written “Chickadee’s birthday” on the envelope, back in November.]
Her: It’s my birthday?
Me: Yup!
Her: I should open it?
Me: Yup! You should open it because it’s your birthday.
Her: It’s my birthday.
Me: Yup!
[I say “yup” a lot. Also, if you could SEE the video, you could see that Chickie is completely bewildered by this exchange, and the friend sitting to her left is about to lift off in flight, such is the excitement and bouncing of the impending moment when the cat is finally let out of the bag.]
Her: Really.
Me: Yup!
Her: No one told me that it was my birthday.
Me: Happy 16th birthday, baby.
Her: Thank you. I don’t know what it is, though.
[Here she FINALLY opens the envelope. And talk ceases, replaced by open mouth gaping, seat-bouncing, and some excited hand-flailing.]

Mission accomplished. Note to my lovely daughter: SURPRISES ARE FUN. CHILL OUT NEXT TIME.

So I think that an evening of diner food and strawberry nutella milkshakes would’ve been a pretty good surprise, anyway, but the envelope contained 4 of these: 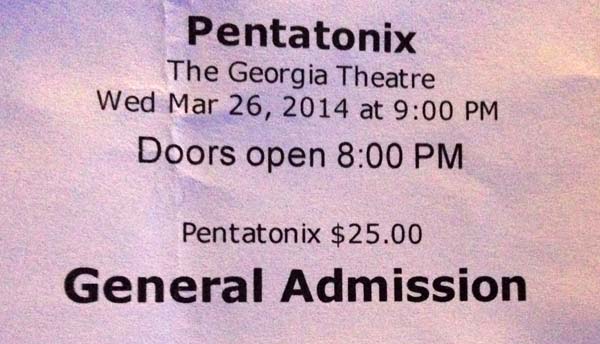 And a couple of hours later, we were—along with the rest of the free world, it seemed—watching this awesometastic and sold-out-since-the-week-it-was-announced show: 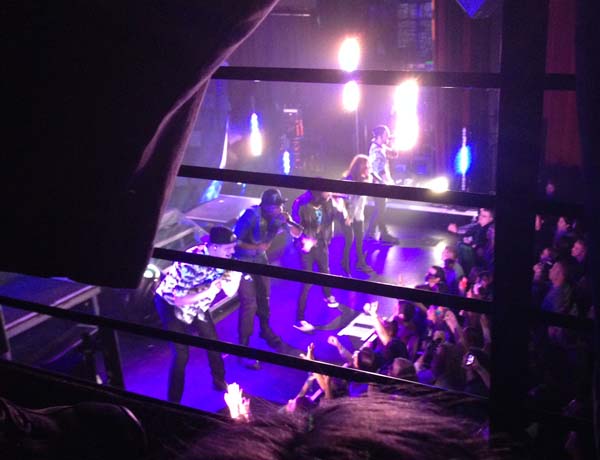 Baby’s first concert! (Many thanks to Pentatonix for putting on such a good one. A grand time was had by all.)

For a few hours there, I was okay in her book. And then her friends said nice things about me on Facebook the next day and that was fun, too. (That was in spite of a moment on the drive home when I heard giggling from the back seat and said, “What’s going on back there?” The friend sitting up front with me swiveled to look back as Chickie answered, “We’re having sex.” I put a hand up to adjust the rearview mirror so that I could look directly at my passengers without turning. I looked at them for a moment while they looked back at me, then announced, “You’re doing it wrong.”) (It’s weird that she finds me embarrassing, right?)

Now it’s almost time for me to do April’s calendar. I’m thinking of putting random smiley faces in a few places just to make sure that we’re all clear that I’m not to be trusted with anyone’s happiness.