Based upon the last post, you might be tempted to believe that the most extensive craft that happened here at Casa Mir during Chickadee’s visit was the Great Vision Board Extravaganza. It was certainly the craftiest thing that I, personally, did, but it wasn’t the craftiest thing overall.

That saying about absence making the heart grow fonder was never more true than it has been for my children this year. Monkey doesn’t so much wear his heart on his sleeve as he just walks around in a giant Monkey-heart-suit, gushing blood and hugs everywhere he goes. Every single time Chickadee was hospitalized he missed her terribly; every time she was home, he wanted to be with her (even if she had no desire to be with him).

Chickadee, on the other hand, was plenty busy wrestling her various demons, and so if she missed Monkey, in the beginning, it certainly wasn’t apparent. And then his clingy version of love during her stints at home were largely unwelcome. I think until she moved away in October, she had convinced herself he was a standard Pesky Little Brother, end of story. But AFTER she left, things changed. I mean, yes, LOTS of things changed, but in particular, I think Chickie came to see Monkey in a new, kinder light. She missed him, maybe for the first time.

And so she began plotting.

She told me about it beforehand—swearing me to secrecy, of course—but I didn’t really appreciate the enormity of the project until she showed up for break with a bag full of fabric and thread and stuffing and half-formed body parts. “It’s not done yet,” she fretted, from the first day she was back. “It’s not done and I don’t know if I can get it done in time. I have to get it done before I leave!”

I assured her that if she didn’t, she could mail it to him, later, but no, she insisted she HAD to finish it. The first five days, though, Monkey was here, too, and so she couldn’t work on it at all. During those five days, my children played games together, compared iPods, and were generally inseparable. Monkey fairly glowed with the happiness of it all. Chickadee remained somewhat inscrutable, but despite her unwillingness to DISCUSS whether she was enjoying her brother’s company, she played the role of doting big sister to a T.

After Christmas, Monkey went up to their dad’s house for a few days. Chickadee brought out the bag and resumed sewing… a few minutes before bed here, a half an hour after lunch there. And on the night before she was supposed to leave, she surveyed the bag of body parts at bedtime, on the verge of tears. “I’m not going to finish. Why didn’t I work on it more?” Again, I assured her that she could mail it later, but she was insistent that it had to be ready for him before she left, so that she could give it to him in person.

We got up the next morning and had breakfast. She sewed while I folded her laundry and packed her suitcase. She sewed while I pinned up a skirt we’d bought her at the thrift store, then sat beside her, making the alterations in my own messy stitching, until the skirt fit properly. She sewed while I sang along with her music until she was forced to tell me how embarrassing I was being. She sewed all day. And she finished it. And then she fixed up a box, too, and said she was ready to give him his birthday present, and then she’d be ready to go.

My ex was kind enough to drop Monkey back at home a couple of hours before he needed to head back out with Chickadee.

“I have something for you, Monkey,” she said. “Wait here.”

Monkey obediently parked himself in a kitchen chair. Chickadee ran upstairs to retrieve the box. She brought it down and handed it to him. 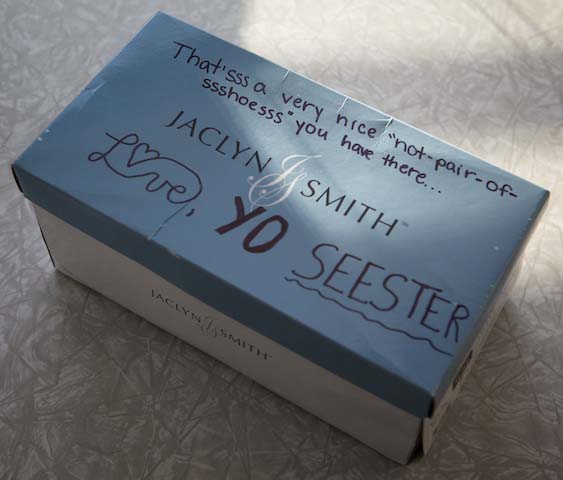 “Ooooo… kay?” he said, looking at with a small grin. “Can I open it?” She nodded and he lifted the lid, peeled back the tissue, and gasped.

Inside, her masterpiece: Hand-sewn, every single inch of it. 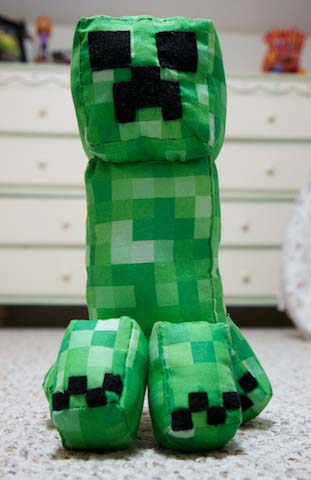 (If you’re not familiar with Minecraft, right now you’re thinking that’s a pretty ugly-ass teddy bear, I know. This is a creeper from the game. It’s hugely significant to Minecraft-obsessed Monkey, and as it turned out, he was perfectly outfitted for this occasion, too.) 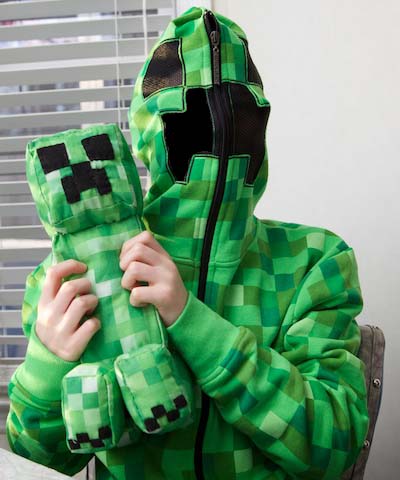 Sweatshirt courtesy of his dad. Mr. Creep—as he’s been dubbed—courtesy of one awesome young lady who knew exactly what would make her brother’s day.

“I know your birthday isn’t until Friday,” she told him, “but I wanted you to have it before I left. I hope you like it.”

“I don’t like it, I LOVE IT!” he declared, hurling himself at her for a big hug. “You’re the greatest sister ever!” She tried to duck her head, but she was smiling.

Mr. Creep now lives on a little high shelf in Monkey’s room, as Licorice found him VERY INTERESTING, and Chickadee informed the entire family that if the dog ripped up all those hours of work, she couldn’t be held accountable for her actions. We agreed that seemed fair.

Did I mention that it was awfully nice to have all my chicks home in the nest, together? Because it really was. Creepy green creatures notwithstanding.