By Mir
December 6, 2012
Category Aspi(e)rations/AD(D)orations | It's not a regret, it's an "experience" | Offspring: ecstasy and agony

Despite my insistence that time SLOW DOWN ALREADY, life continues to zip right by at a maniacal pace. And now we can all stop and consider that statement and laugh at my fickleness, because wasn’t I JUST wishing for 2013 to get here? And now I’m complaining that the year is nearly over and I’m not ready?

I am nothing if not illogical. (No, YOU!)

It’s not clear to me what I feel the need to DO or FINISH this year—I mean, other than the usual sort of “everything!”—but here I am, feeling like time is spinning by and I’m on a deadline. What or when that deadline actually IS remains a mystery, but my brain is convinced it exists. I feel like it may be related to the fact that I’m working a lot and also shoveling all available food into my mouth as often as possible, but who knows. (I mean, I could work less, and maybe take the dog for a walk or something, but let’s not get CRAZY, now.)

So how about a few updates? Yes, let’s!

Otto is now the answer to life, the universe and everything. Thank you for your kind birthday wishes for my husband. Mr. Stiff Upper Lip was fine all day until it was time to get ready to go out to dinner, and then he admitted he just wasn’t “feeling it” so much. Could we just get take-out and postpone the Family Birthday Dinner until Chickie is home in a couple of weeks? Needless to say—in spite of already being disgustingly, over-the-top in love with him already—this suggestion caused me to fall about ten more levels of head-over-heels for him. We got Chinese. We’ll do the “real” dinner once we’re all together again.

I don’t know if you’ve noticed this, but I REALLY like that guy.

First semester of Virtual School: That’s a wrap! Monkey took his final exam for science this morning, and he’s done for the semester. I think I can safely say that his experiences this semester were an incredible learning experience for both of us—he grew leaps and bounds in terms of autonomy and academic knowledge and study habits (what was “get out your syllabus, show me what you have this week, here’s what you need to do…” at the beginning of the semester was “I’ve worked out my schedule for this week, I’m going to go get my work done” by the end), and I learned how to loosen my apron strings and let him just go do it.

To wit: he got so good at managing himself and his coursework, I didn’t check his grades for a while, and then discovered a week or two ago that his science average had dropped by about five points. That seemed like kind of a lot, this close to the end of the semester, so I started poking around in his grades and discovered that he’d gotten a 65 on a major project. Huh. Turns out he’d just done the project without, you know, bothering to look at the scoring rubric. And because I was letting him be autonomous I’d had absolutely no idea. I felt terrible for about five seconds, and then I felt FANTASTIC. Because HEY, he got a 65 and the world didn’t end. And he didn’t even freak out! We of course had a conversation about what went wrong (I didn’t follow the directions) and how to do better next time (follow the directions, OKAY MOM I GET IT), and he did great on the next/final project. Thumbs up on the whole experience, really.

Next semester Monkey will be taking the second half of that science class, plus an introductory programming class. Stay tuned for even more nerdery, because I think my baby is about to have his mind blown.

Speaking of mind-blowing…. I have been chronicling Monkey’s adventures with this year’s LEGO Advent calendar on Facebook, because 1) we’ve never done an Advent calendar before, 2) LEGO is always fun, and 3) the randomness behind each little door is rapidly becoming the most hilarious part of our day. Oh, Monkey tried to do it “right” for the first few days—the fireman dutifully stood in the town center with his bullhorn, the Christmas tree was festooned with the tiny round brick “lights”—but it’s day 6 and he’s given up all pretense of trying to understand LEGO’s intentions, here. 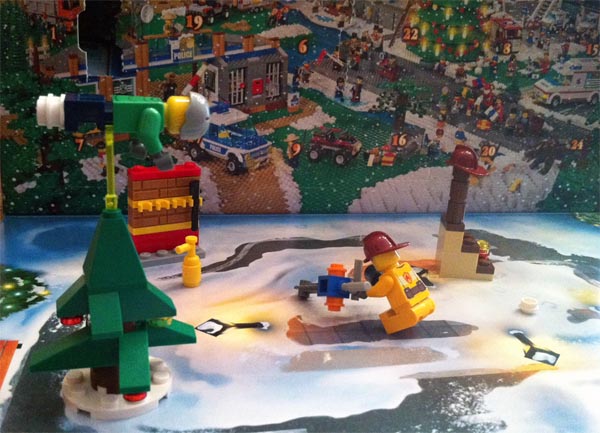 Why, yes, you ARE seeing “some dude wearing a backwards bicycle helmet and stilts impaled on a Christmas tree!” and “a fireman trying to chainsaw his way to the center of the earth.” Plus ye olde yule log appears to be sporting a spare firefighter’s helmet. It’s all just as Jesus intended, I’m sure.

Quietly celebrating. It’s been a long couple of months since Chickadee migrated north, and I’m not gonna lie, it’s been really hard to not be the primary parent and not be there all the time. It’s hard because I love her so much and hard because, let’s be honest, I am a huge control freak. It’s also hard because I would not have characterized her as “happy” since her departure. But this week… I don’t know, I will say it under my breath, lean in a little… but… something has shifted, I think. I’m hearing the old Chickadee again, here and there.

The separation has been difficult but important, for both of us. My kiddo has been given a pretty tough row to hoe, but all along I have told her, “If you can get through this, handle all of this, you can do ANYTHING.” And she rolls her eyes at me (yes, I can hear them rolling EVEN OVER THE PHONE), but I have never doubted this to be true. And I think what I’m seeing lately is her realizing that she can’t wait for me or her dad or anyone else to “rescue” her. She has to make her own choices, set her own priorities. It’s not a linear path by any means (though there’s lessons in the falling down and getting back up, always), but after a two-month agonizing period of watching her refuse to take a step, she’s on her way.

It’s so good to see. And in two weeks, she’ll be home with us and when I tell her how proud I am of her, I’ll actually be able to hug her when I say it. (I dunno, the day we were talking on Skype and I tried to hug the camera she just got all freaked out. I cannot imagine why.)

Farewell, old friend. So over the summer we had the infamous coffee puddle incident due to human error, but twice since then we’ve set up the coffeemaker and come back to find a giant puddle of coffee EVEN THOUGH the pot has been placed under the basket as directed. The first time it happened, I assured Otto he’d just done it wrong somehow, while HE insisted that some springy component of the mechanism under the basket must be failing. It was fine after that so I continued telling him that no, it was fine, it was HIM that was broken. But it did it again today when I was the one making the coffee, so it may, indeed, be time for a new machine. INSERT SAD, UNDERCAFFEINATED PANDA HERE. If you have found the holy grail of coffeemakers which does not require me to sell either child to acquire, please do tell me what I should buy next. Otherwise I am probably just going to buy the same one again, and it seems like that plan may be flawed.

(Or—OOOHHHHHHH!—maybe I can get Monkey to make me one out of LEGO. I can see no downside to that plan AT ALL.)