A bounty of bittersweet

There’s a part of me—rather a large part of me, actually—that wants to just walk away from the blog and leave the last post up forever as the latest and greatest thing I’ll ever have to say. Because there is simply no topping the generosity you’ve shown over the last week, and little better in recent memory for us than the giddy anticipation of taking Chickadee on an outing after so long apart.

Our Saturday afternoon adventure was 99% wonderful. We met up with a staff contact who ushered us around back to unload our donation bounty directly into a basement office, then came back around front to pick up Chickadee, who was literally bouncing in her excitement to see us. We ate good food, ran some errands, got ice cream. Good stuff. Things started to unravel a bit when it was time to say goodbye, but I guess that’s to be expected. Still, it’s hard.

Then we had a meeting at the high school this morning and I forgot that of course band camp is going on, and as Otto drove past all of those marching kids, that group where our Chickie belongs, healthy and whole and happy, he patted my knee and said, “You okay?” I never know how to answer that question, anymore.

Still, we had our meeting and this is not Chickie’s guidance counselor’s first rodeo, so I feel like we’re in good hands. Planning for normalcy when normalcy feels completely out of reach is weird, though, y’know?

Later, I ran over to UPS. And it would appear that you’re not quite done yet: 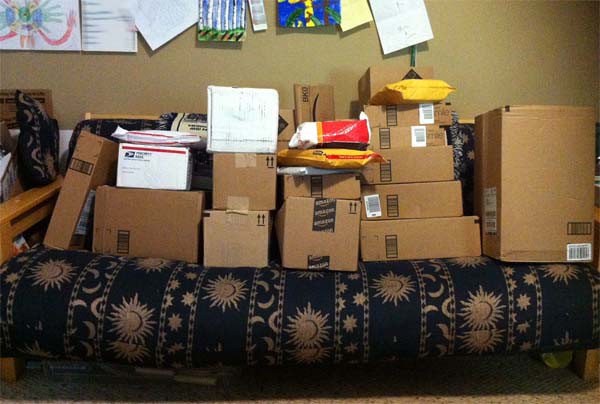 Today’s haul is “only” (ha!) a couple dozen boxes, but while I was tempted to sink into a bit of a wallow it was exactly what I needed to knock me back into gratitude. (The card addressed to “Mir Kamin, Head Lemonade Maker” was especially helpful in the best sort of giggle-worthy way. Thank you, Sheila!!) There’s still work to be done; there’s still donations to be sorted and delivered, there’s still work my girl needs to do and WILL do and normalcy is out there, somewhere. It’s not going to arrive in an Amazon box, but it’ll get here eventually.

I know I said it already, but it bears repeating: I cannot thank you all enough for not just the donations, but the support in all forms (good thoughts, comments, emails). I love that we made a tangible difference for the girls at the hospital, but I am also, selfishly, so grateful that we are not going through this alone. So thank you, again.

Lest I ever venture too far into my own head, I’m lucky to have my own pint-size pragmatist here to keep me grounded.

Conversation as Monkey surveyed the bounty prior to Saturday’s delivery:
Monkey: So, Mom, are you, like, going to be FAMOUS? Will everyone know this all got donated because of you?
Me: No. NO! Monkey, this isn’t the sort of thing you do because you want to be known, it’s something you do because it’s the right thing to do and there’s a need to be filled. And anyway, I didn’t do it, my readers did. I’m just the transport service.
Monkey: Oh I know, I mean, I know that’s not WHY. I was just wondering.
Me: The girls who get this stuff have no idea who we are, and that’s fine. Hopefully they’ll just know that people care about them.
Monkey: But I liked what you said about being the transport. Really, we’re just the fleas.
Me: The what?
Monkey: The fleas! Like, we’re not the ones who CREATED the disease, but we’re TRANSPORTING it!
Me: Did you… just liken my tampons for teenagers drive to fleas giving people diseases?
Monkey: Yep!
Me: That may just be the weirdest metaphor ever.
Monkey: Thank you!