Everyone in the lake!

The best thing to do when you’ve spent a week in a different time zone and you’re still adjusting to that giant Time Hangover where you never want to go to bed at night but you’re dragging around exhausted in the morning is to pack up again and go camping.

Well, no; that is absolutely NOT the best thing to do, but Otto apparently doesn’t realize that. Heh. Kidding! I kid. I totally wanted to go camping. Kind of. Right after I take a nap.

Anyway, we decided to drag Mario’s family to one of our favorite campgrounds, and the way it worked out was that Mario got dropped at our place and came up with us, yesterday after lunch, and his parents were going to come about an hour later, after his dad got done with work. We drove up here in a cacophony of smallish boys one-upping each other with various monster scenarios (“And then that one went BBBBZTBRRRRP and ripped the other one’s head off!”), and after about an hour I dug some Excedrin out of my purse and mild-mannered Otto finally said, quite sternly, “NO MORE SOUND EFFECTS.” (Monkey snorted, but Mario meekly responded, “Yes, sir.”)

And then we got here and Mario’s parents were MIA for hours. We figured that would be a good scam for getting rid of your kid, but eventually they showed up, and they brought lasagna (made with rice pasta for me!), and a jolly start to our camping adventure was had by all.

Licorice loves camping, in general. There are many new smells and also tons of squirrels. It also appears that Kaiser (miniature schnauzer and just a little bit bigger than Licorice) loves camping, though in his case I think it’s because there are so very many things to pee on. The REAL joy here, though, with both of them on the same campsite, they’ll both be sitting around, and then one of them will see something and let out a tiny huff. That will alert the other dog, who will answer with a slightly larger huff. Then the first dog will kind of half-bark, and then the second dog will actually bark, and before you know it, both dogs are going ballistic, yammering and howling, while all of the collective humans yell, “KAISER! LICORICE! NO!!”

It doesn’t help that the folks at the next campsite have a pair of Pekinese (Pekineses? Pekinii?) dogs who are quite yappy, either.

(I also noted yesterday that we have a knack for camping next to traditional Mennonites, which is always entertaining because it’s 90-something degrees out and I’m wearing shorts and a tank top. Meanwhile, our neighbors have women wearing long-sleeve, full-length dresses. I’m sure they think I’m practically out here dancing naked, but whatev, man. It’s HOT out here.)

We ate dinner and then decided that the advantage to the campsites right on the lake is that you can just throw on your suit and go for a dip to cool off after you’re done eating. So we did. 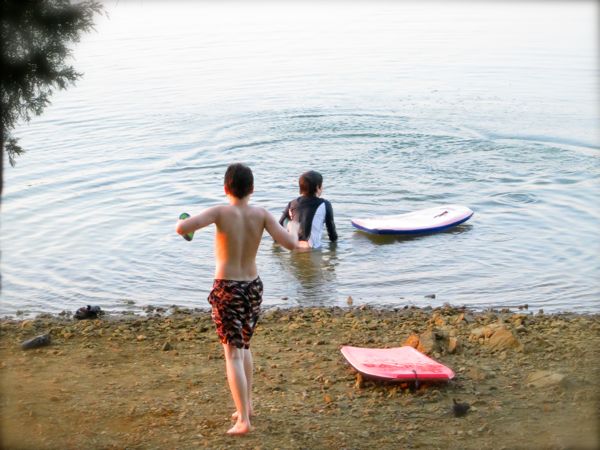 Monkey and Mario were first in, of course. The rest of us were still clearing dishes and such, but we caught up eventually. Just in time to discover that the boys had taken Kaiser surfing. No, really. 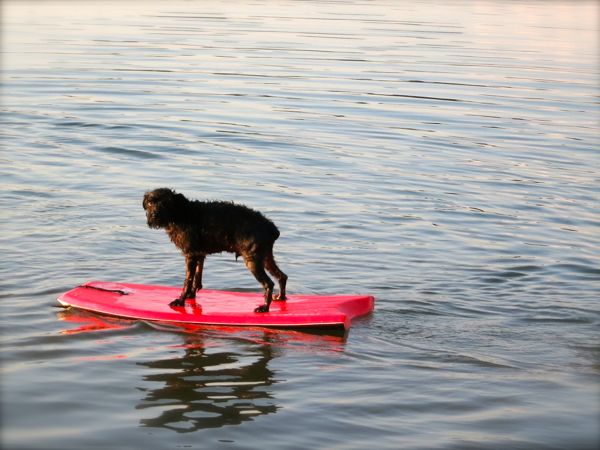 “HE LOVES IT!” declared Mario. If by “loves it” he means “wishes every human here was dead and gone,” then maybe. Nonetheless, we had to agree it was pretty entertaining. (We did not try it with Licorice, for fear she would murder us in our sleep. As it was, we took her to the lake’s edge for a dunking and even though I wrapped her up in a towel afterward, I think I heard her muttering something about stabbing me as soon as I put her down.)

Eventually the sun set and we came out and dried off. We moms walked the dogs while the menfolk did… something… (who knows, really)… and then we all sat around talking until the boys went to bed. And then we talked some more and then the rest of us went to bed.

Then this morning Kaiser huffed a little in their tent and Licorice huffed back and then they both started barking and that’s how we knew it was time to get up. Now the men are down by the lake with enough fishing tackle to outfit a dozen starving people and the dogs are napping and the smart and double-X chromosome-d are holding down the camp with a big stack of trashy magazines.

Come to think of it, this isn’t such a bad cure for jetlag, after all.