By Mir
February 18, 2012
Category Haven't been hit by lightning yet! | Offspring: ecstasy and agony | Woohoo!

I’ve been to hours of rehearsals and have missed hours of rehearsals. I’ve driven to rehearsal and wiped tears off my cheeks the whole way there because it was my only time alone to vent the frustration and sadness I was feeling over my oldest being sick and scared and beyond the fixing I used to be able to do with band-aids and boo-boo kisses.

I’ve laid awake at night while Otto gently snored next to me, my prayers for strength and patience and grace all tangled up with mental repetitions of my lines for the show—lines I could’ve easily learned in an afternoon back when I was in college, but which now eluded me or got twisted up on my tongue as my older, slower brain darted from one worry to the next. I stared at the ceiling in the dark and hoped I wouldn’t make a fool of myself; hoped I hadn’t made the wrong choice, staying with the show, even in the midst of everything else.

I apologized to my girl for leaving her so much, especially this last week. “I would’ve been mad at you if you dropped out,” she said, simply. “It’s okay. I’m glad you’re doing it.”

We opened on Thursday night; because it was a school night, Chickadee stayed home, and my dad came to see it, instead. He sat in the second row and beamed at me the entire two hours. Other cast members whispered backstage about the “white-haired gentleman in the second row who is clearly enjoying himself immensely.” I giggled and told them “That’s my dad!” This brought a chorus of “HE’S ADORABLE!”s from my castmates.

This was enough to make for an awesome evening. By the time we got home, I was riding an adrenaline wave so high that Otto finally commented, “You’re… pretty pumped right now, huh? You’re kinda chatty.”

Last night, my dad stayed home with Monkey. [Sidebar: Want to have some fun? Take one 12-year-old boy who thinks farts are hilarious but that actual female anatomy is the grossest thing ever and offer to bring him to see The Vagina Monologues. Observe horrified retching and squirming. Repeat the next day, if you’re particularly cruel.] Otto and Chickadee came to see the show, and sat in the second row where Dad had sat the night before. They smiled and laughed, and I was happy to be able to look out and see them there.

If you’ve never been to a production of The Vagina Monologues before, one of the things they do is—as part of the introduction to the show—they talk about how we’re all “vagina warriors” and then they pass out index cards, asking the audience members to complete the sentence “I am a vagina warrior because….” The cards are collected at intermission, and when the show is over, the cast lines up on stage and reads off some of the responses. This is BAR NONE my favorite part of the night, because the responses range from the hilarious to the inspiring.

The first night I read a serious response from a woman who’d broken the cycle of domestic violence. Last night I got a card from someone who said that her vagina wasn’t a secret place, it was a LOVELY place. (Ha!) And then the next person to read had this card: 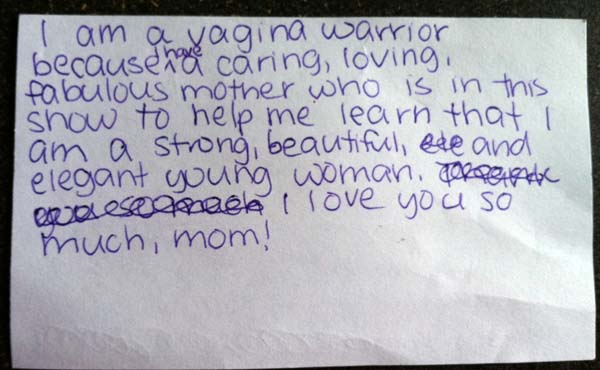 And Chickadee beamed at me and I threw her a kiss and then I teared up and was a blubbery mess for the rest of the readings.

I got the very best one.