By Mir
January 9, 2012
Category Haven't been hit by lightning yet!

“I would never blog this,” I told her, after.

“What? You HAVE to blog about it!” she said. “People should KNOW. It’s DANGEROUS.” I asked if she was sure, and she said yes. So please be mindful of the fact that my easily-mortified teenager gave me the green light on this one, and let’s acknowledge first and foremost that she 1) is a rockstar for overcoming possible embarrassment to let me share and 2) has delicate little feelings which I would ask you not to hurt if you feel the need to comment. Also, if you are male and ESPECIALLY if you are related to my teenager (Otto, my dad, and her dad who is pretending not to read my blog), maybe skip this one.

To begin our story, let us hearken back to the days of young teenage Mir. It was a different place, a different time. (Namely, it was the Stone Age.) When I got my first period I was ABSOLUTELY THRILLED (why? I don’t know), and I also used tampons right from the beginning and thought it was no big deal.

But my girl and I are a little different in this respect.

To put it plainly: Chickadee heard me say the WORD “tampon” and her brain melted and oozed out her ears. Proclamations such as “NEVER” and “I’M NOT PUTTING ANYTHING IN THERE” and the like were uttered. This was, of course, perfectly fine. Not everyone has to use tampons, after all.

Life continued on in this way for quite a while.

Eventually, however, things changed. Someone realized that, say, track practice while wearing a pad might not be so very comfortable. Someone came to me with GREAT TREPIDATION and said that JUST MAYBE she might POSSIBLY be willing to try using tampons. As long as it didn’t hurt. As long as she knew exactly what to expect.

First we watched this:

Then we watched this:

(Chickadee asked me if I had to watch that when I was in school. Apparently she thinks I’m 80.)

Eventually it seemed that we were both well-informed and also quite giggly, and then the issue was only that we needed to purchase some tampons.

“I always used Tampax,” I told her. “Plus they make a really skinny one called Slender Regular. I’ll get you some of those.”

“I have some tampons already,” she said. “They came in one of those free sample things. Let’s see what kind those are.”

Here let’s back up once again. Bear in mind that I had a hysterectomy years ago, so my tampon days are a distant memory. But I always used Tampax and had no issues. I used both Playtex and OB exactly once each, finding both of them nearly impossible to remove, and I went back to Tampax. (You’re welcome for sharing.) (You’re welcome for this entire post, really.) The point is: I was mindful of the fact that some tampons are harder to remove than others. THIS IS IMPORTANT LATER.

Chickadee brought me a couple of Kotex tampons. Kotex makes tampons? I had no idea. And I knew nothing about them. But she was eager to try it out so we decided that she would try one of those and then we’d go to the store and buy some.

I sat in the bathroom (with my back to her) for moral support. Poor kid, she was really nervous. I said soothing and helpful things like “Don’t put it in your nose” and “If you taste cotton, you’ve gone too far.” (I may have also said things like “Deep breaths, try to relax.”)

It ended up being no big deal! She was clearly relieved that—as promised—a properly inserted tampon cannot be felt at all.

We went to do our weekly grocery run, and she suggested that we go ahead and buy a box of the kind of tampon she was wearing, given that it had all gone so well. Plus, they were a lot cheaper than the Tampax. So we did. 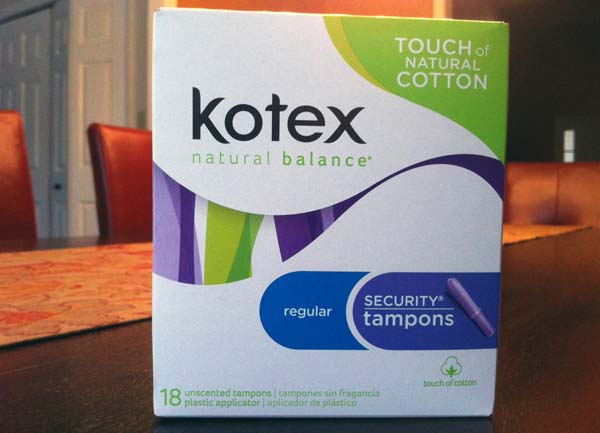 These are the tampons we bought: Kotex Security. They are surprisingly affordable; like, they were the cheapest tampons on the shelf. That should’ve been my first clue.

Unfortunately, I was a little distracted, because I was busy trying to lecture my kid about how DO NOT BUY DEODORANT TAMPONS OR PADS EVER THEY ARE POISON FOR YOUR GIRLY BITS and she was looking around nervously and hissing, “I know. I KNOW! STOP!” I love bonding this way at the store!

We came home from grocery shopping and put everything away. Life continued as per normal. And a few hours later, I was asked to come provide some moral support yet again, for The Removal.

Well, the first part had gone so well, I was expecting this to be another “Wow, that was easy” experience. HAHAHAHAHA. I was about to be smacked down with guilt and remorse.

She couldn’t get it out.

And then, of course, she started freaking out. Because of course she did. That’s scary, you know? With each passing moment, she’s becoming convinced that she’s going to have to live the rest of her life with this tampon stuck inside of her, right up until she dies of Toxic Shock Syndrome. SHE WATCHED THE MOVIES, MAN. SHE KNOWS IT’LL KILL YOU. And I am trying to remain calm and soothing, but you know, this kid can kind of be a drama queen, and I think her whole “it hurts” and “I can’t” may just be her… being her.

After a prolonged drama which I will spare you (except for this pro tip: warm bath), the offender was indeed removed successfully. But I feared my kiddo was scarred for life. And I kept apologizing, as if I had run after her and squirted crazy glue into her crotch, causing all this fuss.

Later that evening, she came to me and told me she’d unwrapped another one to look at it. And it was then that the Mama Bear Guilt really kicked in. Because… I figured out what “Security” means to Kotex.

Here’s one of these tampons: 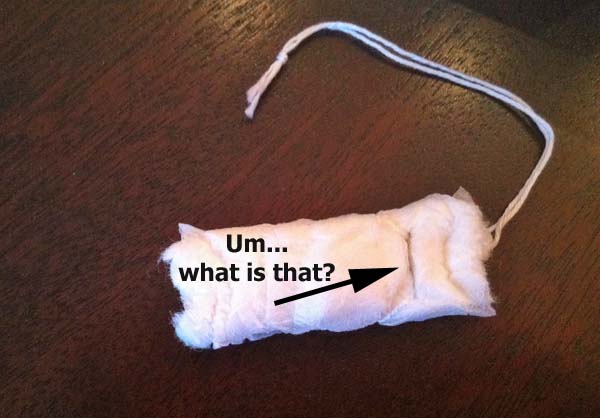 I was naturally concerned to discover that this particular tampon appeared to have… a mouth?

We flipped it over to investigate further: 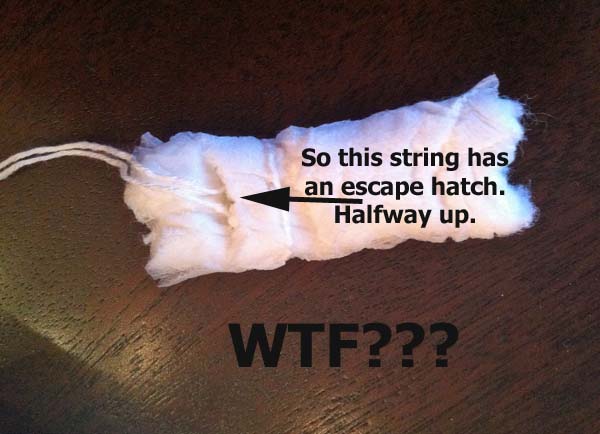 Soooo… every tampon I’ve ever used has the string stitched in along the cotton, ending at the bottom. But Kotex, apparently, has a factory somewhere where enslaved 6-year-olds just grab a hunk of cotton, tie some twine AROUND it, and then feed that string through the handy hole for “security.” Honestly, Monkey could make a better tampon than this.

Can you guess what this nifty setup does when you try to remove the tampon? 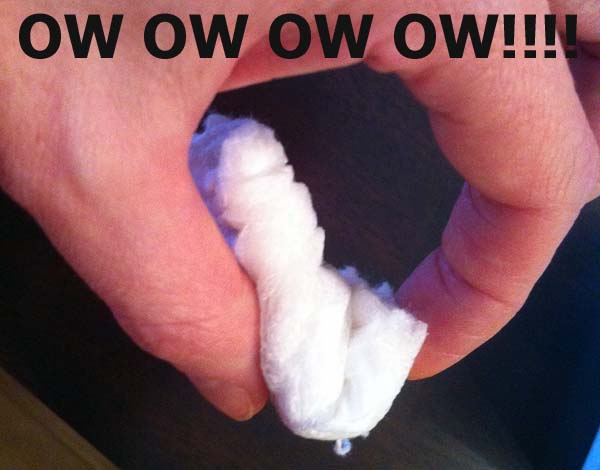 Oh, these tampons offer security, alright. The security of making sure that your teenager will never, ever, EVER even THINK about having sex. Because if that’s what happens with a tampon, well… yeah. (And really, I’m all for discouraging the young’uns on this one, but I prefer to do it the old-fashioned way, by reminding ’em that babies are loud and messy and no method of birth control is 100% effective.)

My poor baby is going to be in therapy for the rest of her life, at this rate.