Have I mentioned lately how much I like all of you? Because I do. You’re a lovely bunch of super nice people I would like to have over for a party on my deck. I mean, once there’s actually guardrails and stairs, and stuff. Probably I would only be serving Chex Mix I got on clearance and three buck chuck from Trader Joe’s, but the LOVE, man, THE LOVE IN THE AIR would make it a party.

This is the part where I tell you that everything worked out splendidly. Life turned right around and all is flowers and sunshine. Wouldn’t that be great? But… yeah. No. We did, however, go out Friday night and listen to some great music and drink wine out of plastic cups (fancy!) and generally have a nice evening. So that was lovely.

Of course, it was raining pretty hard so the marching band left their away game early, and we were still out when Chickadee texted us that she was back at the high school and needed a ride. Because we’re responsible parents, I texted back that she should find someone else to give her a ride home. And you know what? She did.

Just when I was thinking that she was growing up and being mature and realized we really needed this date night out, the pestering began. The second half of our evening was punctuated with entertaining texts from the homestead, which was actually kind of endearing. I mean, they started out that way, anyway.
When are you coming home? I miss you.
The dog is crying for you. She misses you, too.
I had a big cup of coffee and I’m not tired at all, can I stay up until you get home?
NOM NOM NOM I FOUND THE CANDY ON TOP OF THE FRIDGE!!!
Snickerrrrrrrrrrrrs!!!!!!!!

Otto told her to put the candy back, so a few minutes later we got:
Why girl throw up on top of fridge? I can’t reach it. Come home soon! Love, Your Awesome Dog.

When I inquired as to how the dog was typing with no thumbs?
Using my tongue. Nom nom.

All part of the romance of the evening, I guess. All in all, not a bad night.

The rest of the weekend was sort of a blur. While I complain about Science Fair taking over our lives every year, this year it’s also taken over my bathtub. Every time I see the chiropractor she suggests I have a nice long soak in the tub with some Epsom Salts, and every time I sort of say, “Oh, yeah, that’s a good idea” and then I never do it because… who has time for that? But now the next time she brings it up I can say “Oh, I can’t do that. MY TUB IS FULL OF ZOOPLANKTON.” And that will be true. (Yeah, it’s in jars. Under a big grow light. Still, I don’t really want to bathe with them.)

Highlights leading up to the tub full of specimens include Otto getting to go to Ye Olde Home Improvement Store and ask for help on building the light. (When the guy asked what he was trying to do, my darling, upstanding husband told him we’re building an indoor grow house. AWESOME.) Also, Chickadee and I made a run to a local lake where it’s unclear if we were actually allowed to remove the water we did, so while laying on a dock dunking collection containers into the water below, I asked her to outline her procedures for me, and we decided that “Step 1: Drive to lake, Step 2: Hang off the dock to collect your water, Step 3: Run from the police” was probably going to need a little creative editing before she put it in her log book.

Monkey, meanwhile, was delightful all weekend except when he wasn’t, which just goes to show that Super Giant Meltdowns can strike at any time, really, and that’s just how it is right now. So… yeah.

Last night I made delicious soup for dinner that Monkey loved the last time I made it, and this time he didn’t like it. Also, while I was cooking, somehow an entire gallon of orange juice “fell” out of the fridge and I kept having to yell at Chickadee to move her collection jars and pipettes and other materials OFF THE KITCHEN COUNTER because I didn’t want any lake water in our soup. (But late last night we watched The Next Iron Chef on Food Network and during the challenge someone made a stew with lake water, to which I—having seen what it is that lives in that stuff—can only say BLEARGH.) Eventually dinner was over and children were in bed and the kitchen looked like a tornado had hit it and I was still tired and cranky, but it was okay.

I mean, it mostly is okay.

I think that any time I have trouble remembering that, I’m going to wrestle Licorice into her Halloween costume. (Better pics courtesy of Otto, tomorrow. Today, you get me pinning her down on the bed and shoving my phone in her face. Heh.) SHE LOVES IT. 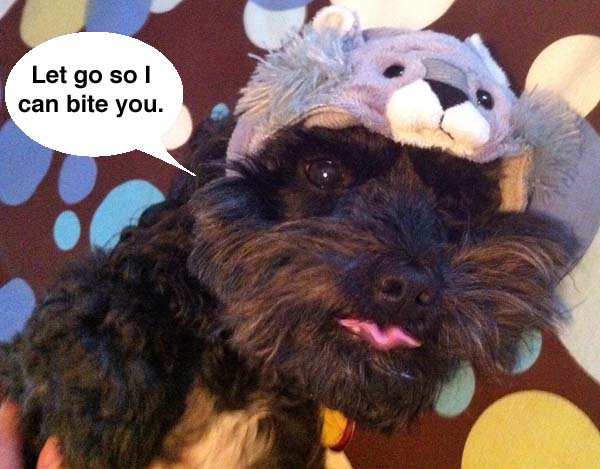