“I want to study chemistry,” he said. “Do you do that here?”

“Sure,” she said. “If you come here, you get to choose a lot of what you do. What do you like about chemistry?”

“I don’t really know, yet, I just think it would be neat.” He was playing with Legos in the middle of the floor, happily chatting, a far cry from his refusal to look at the new parapro the day before.

“Well, you can maybe choose that for some independent study, or when it’s time to do a group project you can pitch that to the other students and see if other people want to do it, too.” For the past half hour she had gamely jumped from topic to topic along with him, unperturbed by his non-sequitors and occasional lack of manners.

“I want to learn how to blow things up!” he said, sweeping his arms wide. As I barked his name and dropped my face into my hands, he laughed. “Just kidding!” he added.

She was unfazed, and explained some of their past explorations, while he continued playing. He made no signs that he was paying attention, but every time I asked him if he’d heard what was just said, he’d parrot it back to me. He was listening.

“It was not my goal to be a special needs school,” she told us, a bit later. “It’s for everyone. But of course it’s the kids who are a little different who maybe have a harder time in the public schools. If Monkey comes… let’s see… that’ll make three boys with Asperger’s, at least. There’s another who… well, no formal diagnosis, but you know. He’ll be in good company, is my point.”

We were upstairs, then. The area was almost completely unfinished, but they have two weeks to get the new building ready before the term starts. “This will be the library, up here,” she said, gesturing to show us where the books will be, describing the planned furniture, and then she turned back to Monkey. “Do you ever like to be in a really small, dark space to chill out?” she asked.

Now it was my turn to laugh. “Dude, you’re in the cubby under your bed or in the closet ALL THE TIME. Really? You don’t know if you like small dark spaces?”

“We’re going to have human cubbies up here,” she told him, gesturing to the wall, painting the picture with her fingertips while she talked. “Remember the cubbies downstairs? We’ll have something like that up here, only we’ll put curtains across them, and pillows inside, and if you need some time to decompress, you’ll just be able to come up here and go into one and shut out everything.” Monkey had already spotted a few hula hoops leaning against the wall and moved on to those, but Otto and I exchanged a look. A “HOLY CRAP THIS IS AWESOME” look.

[When Monkey was in second grade, his teacher had an antique bathtub in her classroom. It was filled with pillows, and I’m pretty sure Monkey spent the better part of the year in it, hiding and reading a book.]

“These hula hoops are cool,” he said, picking one up. “I am really good at hula hooping.”

“Oh yeah,” he said, real dismissive-like, as he stepped into a hoop and started it going. “When we have free time in gym all we’re allowed to do is basketball or hula hoops. When I play basketball I always get hit in the head. I stick to the hoops.” The adults squelched giggles as he gyrated for a while, finally letting the hoop clatter to the floor.

“That’s one of our projects,” she said. “Everyone makes their own hula hoop, and then decorates it. So if you come here, you’ll get to make your very own.”

She smiled. “You can come to school here. But we don’t start for two weeks.”

“Awww, man!” His disappointment at having to wait melted away as he continued running around, touching everything, asking a million questions, and delighting in being allowed (nay, encouraged) to zoom around the main floor in a wheeled office chair to his heart’s content. 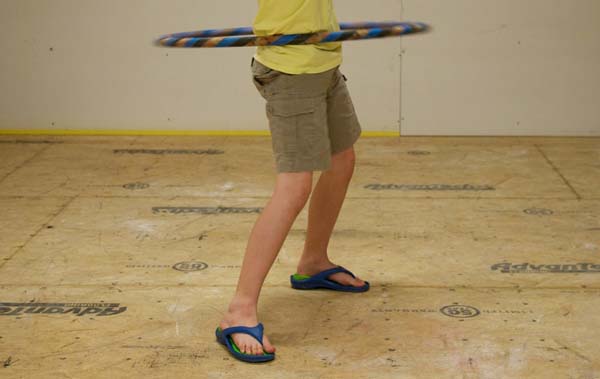 *Hippie School is a homeschool collab, so technically we are homeschoolers. But this is a glorious compromise, where he gets a separate building, teachers, and classmates away from home (what he wants) along with a different learning philosophy and a very different environment than public school (what I wanted for him). Plus, you know, HULA HOOPS.