It’s the end of the fence as we know it

This morning as the fence guys banged away outside, I wrote out the final check. Then I took it upstairs to Otto’s office and handed it over. “I’m not talking to them, I’m not looking at them, I’m not discussing anything with anyone. When it’s done and you’re happy, give it to them. But I’m not here.” Otto chuckled and agreed, because he’s known me a very long time, and he knows that when I voluntarily remove myself from a situation like that, it means it’s really best for everyone concerned.

An hour later, it was done. DONE. Today is day 34, by the way—just in case you were keeping track. (Not that we were. OH HA HA HA! I crack myself up. Hee.)

It looks great. There were only a few times with this last crew that I wanted to rip someone’s eyebrows off. Plus they’ll be back next month to seal it for us for free (just a little bonus you get when your fence job is totally botched and takes over a month). And most importantly—let’s not forget—it’s DONE. Thank God. Oh, did you want to see it? 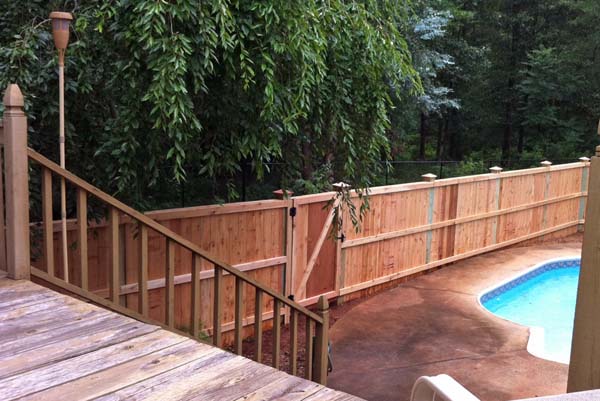 Pretty nice, right? I mean, honestly, I have a hard time getting too worked up about a fence. I’d rather not have barbed wire or the skeletons of unfortunate hobos surrounding the pool, I guess, but really, all I ever wanted was something that would 1) keep the dog in, 2) meet code, 3) not require a lot of maintenance, and 4) give us a little privacy. About halfway through this process I started considering building my own fence out of rice krispie treats, but with the ants, you know, that seemed ill-advised.

Yesterday our regular contractor (who doesn’t do fences, hence this particular nightmare) (also, how much of a bourgeois asshole do I feel like saying we have a regular contractor, even though, um, this is not a new house and so we actually do?) stopped by and we filled him in on the fence debacle (his comment: “I guess I’m probably not going to be getting that referral bonus from him on this one, huh?”) and then we had a prolonged discussion that involved measuring and planning and finally he left just before I started to hyperventilate.

Because, you know, normal people would’ve gone through this and then heaved a sigh of relief and vowed never to do any renovation of any sort ever again.

But we are not normal people, so this morning the contractor emailed me his estimate for rebuilding the deck and Otto said, “So, do you want to talk about this?” and I said, “No!” But I was lying.

I am a glutton for punishment. Either that or I’ve just got to figure out a cheaper way to generate blog fodder.