“Friends will come and go. Your family is forever. You only get one brother, and you only get one sister. This is it.” I do a small mental-finger-crossing whenever I speak these words to my children, because of course their father could yet remarry and bring more siblings into their lives, but with each passing year it seems less likely, and I don’t own a crystal ball, anyway, so I feel okay about asserting the finality of their circumstances.

They fight. All kids do, of course. I don’t think they fight any more than “average” siblings (whatever those are), but it’s possible I fret about it more than I should. I know what they don’t, which is that they need each other even more than other kids. Monkey needs an ally in his sister because his forays into the world are sometimes harder than they ought to be, and as I keep telling Chickadee, we owe it to him to always make sure home is a place of safety and love. And Chickadee needs her brother more than she admits, because–although she’s starting to spread her wings—there is a hard little knot of uncertainty deep between her shoulder blades that only the worship of her little brother can soften.

When they work together, there is nothing they can’t handle.

When they are cruel to one another, fear and memories I’d half-forgotten uncurl, restless, in my stomach.

I try not to overreact. That only makes it worse, and I know that sometimes I carry my own demons into these situations. I try to keep it about them. And I try to emphasize that fights happen, but we all love each other and that’s the important thing.

Have you ever preached love to a couple of pissed-off tweens? It works about as well as you might guess. Which is to say: not at all.

Monkey is typically awful to his sister in times of total meltdown, which means that his jabs and cruelties are explosive and piercing, though thankfully rare. When she does evoke his ire, she gets the worst of it, no question.

Much more common are Chickadee’s small but deadly poke-the-animal-with-a-stick tactics when she’s either mad at someone else or just feeling bored and not very nice. And the thing is, siblings are annoying to one another, of course. But (generally speaking, anyway), Monkey annoys his sister completely by accident, while she often revels in annoying him on purpose. Which can then spark a meltdown. Which leaves her complaining that HE HIT ME or whatever, and while he’s not allowed to hit, that also means we all know she did something to provoke it.

So that’s the preface to what happened a few weeks ago, when the kids were upstairs talking to their father on the phone, and suddenly Monkey let loose a primal shriek of unmistakeable agony that left us racing up the stairs.

All that was clear, initially, was that Monkey had been kicked in the groin hard enough to leave him crumpled in a heap on the floor. We were horrified, but Chickadee was absolutely unrepentant, insisting that he’d “lunged at her” as they’d squabbled over the phone. In very short order BOTH kids were wailing and Chickadee was in Very Big Trouble but we still weren’t sure what had happened.

After about an hour, it became clear that the kick ended up being an accident of balance and leverage. They’d scuffled over the phone; Monkey tried to grab it, knocking Chickadee down, and her leg went out as she fell back, and now she felt very much the wronged party because it had been an accident.

Monkey snuffled in his room, asking for a lock on his door “so that Chickie can’t come in here in the middle of the night and kill me.” (I tell you what, Aspie Fear drama puts Tween/Teen Girl drama to SHAME.) Chickadee wailed in her room about how he never gets in trouble, everything is always her fault, and no one loves her.

Otto and I took turns going between them, trying to smooth various hurts, trying to put them back together again. I ached, for both of them.

Finally, as Monkey continued his endless lament, I said, “Are you never going to be able to have kids?” And this comment was, for some reason, so hilarious to him, that it broke him out of his self-dug DoomHole and he cheered up because I am so weird.

Then it was back to Chickadee to try to get her calmed down and ready to come apologize to her brother. And again, I found myself repeating how this is important, he’s her only brother, things are going to happen and it’s not whether they never fight or never hurt each other, but how they fix it, afterward. “You have to come apologize, sweetie. He needs to know you’re sorry.”

“He’s so mad at me, he’s not going to accept my apology!” she cried. “He’s just going to be mad at me forever and I didn’t mean to hurt him!” We talked some more and finally she was willing to walk down to her brother’s room with me.

Monkey lay in his bed, back to her. She put a hand on his arm and he didn’t move. “Monkey, I’m really sorry. I didn’t mean to hurt you.” He stayed immobile. Another tear trickled down Chickie’s face and she added, desperate, “Please forgive me.”

There was a pause. I had long enough to pray that he would accept her apology, lest he now decide to dig in his heels and we’d have to go through several more rounds of Operation Everyone Stop Being Mad At Everyone Else. The silence stretched. I was holding my breath.

Finally, Monkey turned over to face his tormentor. “Well,” he huffed, “I’m never going to be able to have kids, now.” 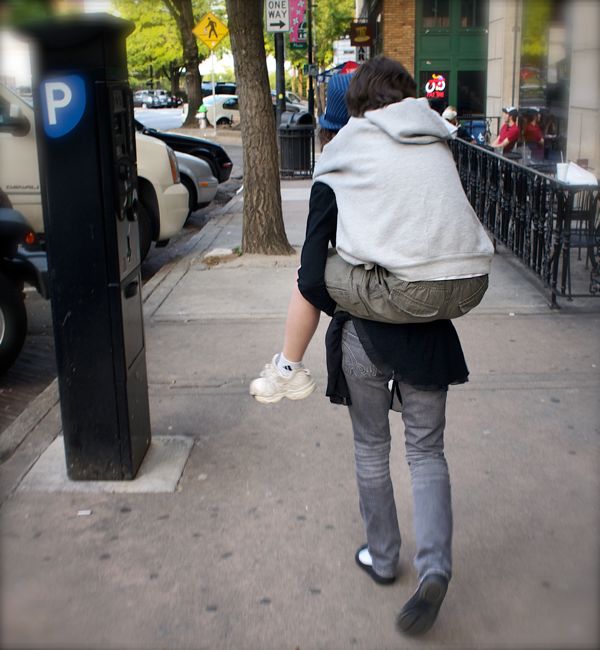