Even while blogging during the cruise itself, I found it hard to capture in words what was the most amazing during our trip. I mean, it was amazing that my father did this for all of us; it’s the kind of vacation we never would’ve experienced, otherwise. And it was wonderful to spend time with far-flung family, and watch all the kids play together, and have our dinner waiter both prance around the dining room every night with Gerber (by the third night or so, Gerber would happily lift his arms up to him for his ride) and remember that the other kids would each be needing a glass of milk.

[Sidebar: Monkey got all teary on the last day because he wanted to take the waiter home with him. I suggested the kids make him cards and Monkey—ever our darling Literal Boy—wrote something about how “I know they don’t pay you very much money so I’m going to suggest the ship gives you a raise.” After a brief and not altogether successful conversation about how that was perhaps not the most politically correct thing to say, he changed it to “I know you work very hard so I’m going to suggest the ship give you a raise.” Phew.]

I know my father was hoping this trip would help bring the family closer together, and it did in ways I know I hadn’t really even considered.

My brother and I aren’t particularly close. And it’s not anyone’s fault, and it has nothing to do with either of us specifically, I don’t think. We live far from one another; we ran in different circles when we were kids and then went off on very different life trajectories as adults. Getting to spend some time getting reacquainted was both weird and wonderful. That part I expected.

The part I didn’t expect was how clear all of this would make it to me that you can’t underestimate these sorts of bonds, and how important their formation is from the very beginning.

I always tell the kids that friends are for as long as they last and family is forever. I am forever exhorting them to BE KIND to one another. “This is the only sister you have.” “He’s your only brother in the world.” They shoot daggers at each other with their eyes—these conversations always happen mid-scuffle—and huff and scoff at what I say. “It’s IMPORTANT,” I tell them. “When you’re a grown-up, this is the only person in the world who will have experienced your entire childhood with you as a child. It’s different. It’s special. Don’t toss that aside like it doesn’t mean anything. I promise you the day will come when you’re grateful.”

On the one hand, I really don’t worry. Chickadee and Monkey are closer than my brother and I ever were, for a number of reasons I can guess at that may or may not be relevant. (Most notably, they’re closer in age than we are.) Most of the time they get along well.

But on the other hand, we’re coming off this hard, awful school year, and on top of everything else, Chickadee’s start of middle school made her really want to pull away from her brother, both because he was harder to deal with this year and because she’s becoming very invested in being older/cooler/hipper-than-thou. And I feel like I’ve spent an inordinate amount of time this past year quietly saying to her, “But he needs you. Now more than ever. Home has to be a safe place for him, Chickie. You’re a big part of that, and I need you to try harder. Do it for ME if you can’t do it for him. Please?”

But in the midst of a swarm of extended family, inbetween the thrills of adventures in foreign countries and the novelty of adoring cousins and more aunts and uncles, I’d like to think that my children carved out their own spaces to be themselves, to be part of our larger family, and to share it all with each other, too. Monkey really tried to tone down the noise. Chickadee really tried to be sweet to him when he needed it.

And on the last morning, they sat in the hidey hole together, pointing and giggling and whispering about who knows what, the way conspirators should. And sometimes they just sat and looked, and said nothing at all. 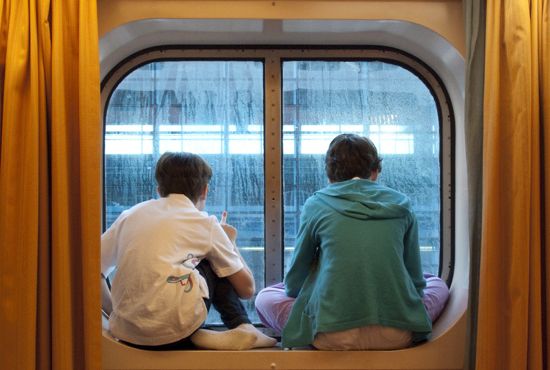 I like to think that enough love is flowing around them that no matter where life takes them, they’ll always have ample room for one another.

Happy Love Thursday, everyone. And a special note to my brother: Your annoying little sister loves you. (P.S. No, YOU smell like a truck.)