Love is where you see it

I have a young friend who’s going through a difficult time, right now. And so I counseled her—feeling impossibly old and insensitive and Terribly “Adult Who Doesn’t Get It”—to try finding one thing every day that makes her happy, for a week, and to focus on that. “It will help,” I told her, knowing that she was probably rolling her eyes (internally if not externally) and thinking about how I just don’t understand.

The thing is, I totally DO understand. I mean, it may have been a long time since my first heartbreak, but hello, here is my six-year-long shrine to Things I Obsess Over Sometimes When I Probably Should Just Move On, and what I really wanted to say was, “Oh, honey, I understand the impulse to wallow, heck, I may have INVENTED the impulse to wallow, and no one loves a good wallow more than me, sister. But then, sometimes, you have to force yourself up out of the mud and remember that life is still worth living.”

Of course, I also must acknowledge that someone basically tried to tell me exactly that when I was around her age, and do you know what I thought? I thought that no one had ever hurt as badly as I was hurting, certainly not the advice-giver, and she just didn’t UNDERSTAND and the only way to cope with my pain was clearly to 1) mope relentlessly and 2) write bad poetry.

I often share a long story or a specific interaction on Thursdays, something that’s touched me deeply or is meaningful to me or really made me stop and think. And I love all of that. But how often do I find the joy in the mundane, stop to appreciate the little things? Not often. Certainly not often enough to grant me the necessary cred to suggest that someone stop to smell the roses, as it were.

Recently as part of our current Spring Cleaning challenge at Five Full Plates I decided we were going to eliminate using paper napkins in the house. The problem then became that I needed us to be able to reuse our napkins a few times (I didn’t want to have to choose between buying a billion napkins or doing laundry constantly) and—provided it’s not a messy meal (in which case I would obviously wash them)—I needed to be able to keep track of whose was whose. I mean, using the same cloth napkin twice doesn’t bother me. But using the cloth napkin someone ELSE wiped their mouth on already kind of grosses me out. So.

Napkin rings. And not just ANY napkin rings, but different ones, so that I could toss the napkins in a basket or whatever between meals, and we’d each be able to identify our napkins by the rings.

I trolled Etsy and eBay and searched on random things, but really didn’t know what I wanted. All I knew was that I probably wanted something slightly retro to go with our shiny dinette.

One day I found them, and a few days later they arrived. There was no bickering over who got which one; we all knew exactly which one was right. And now we no longer think about them at all, except when I do, and then I smile. 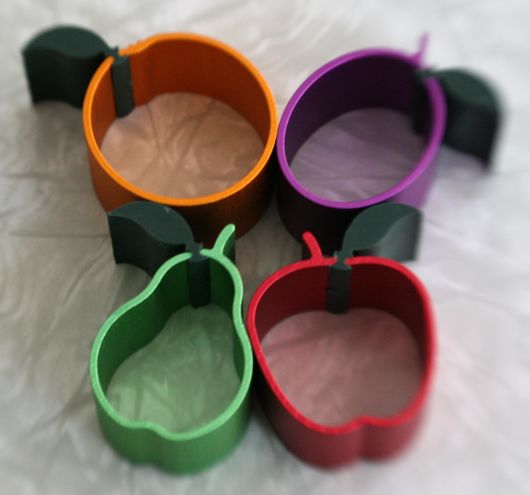 Otto is orange, of course, because he loves the color and loves our alma mater. Me, I’m a fool for purple, so naturally I’m the plum. Monkey’s favorite color is green and sometimes I think he’d happily wrestle the dog for a pear core. Chickadee goes through a bag of apples a week and in reality the apple’s red is actually closer to pink (her favorite color). And—of course—they’re made of aluminum like those old tumblers, so they go quite nicely with our table.

It’s a little thing. Rather, it’s four little things. But I look at them and see my family; see how things don’t have to be the same to go together; see how I am lucky even when I’m not so good at appreciating it in the moment.

I need to do this more. I think I will.

Happy Love Thursday, everyone. Where will you find the love today?