Up until just a few years ago, my black thumb was legendary. You name the plant, I could kill it. Not intentionally—never intentionally—yet somehow my efforts to nurture growing things were met with grim, black death. (I have killed cacti, people. Do you know how difficult it is to kill a cactus? It’s a gift, I guess.)

My record these days is much more favorable; I garden with some measure of success, I keep houseplants alive and occasionally nurture a wilting plant back to health from the brink of neglect (whoops). I’m no longer the blight upon plant-kind that I once was, is my point.

Buoyed by these experiences, I now often forget that my touch hasn’t always been so stellar. Ahem. And I acquire plants, because plants are Nice, and they seem like Nice Things To Have.

When Otto and I first made the trek to our somewhat-local Ikea, I bought some bamboo.

Because that—along with eating meatballs, apparently—is what you DO when you go to Ikea. You buy a bunch of plastic kitchen stuff, and some furniture made of fine Swedish pressboard, and then you pick up some bamboo on the way out.

Except, of course, that they have all sorts of handy signs posted explaining the various Chinese lore and Feng Shui and numerology rules and stuff about what various combination of bamboo MEAN. The bamboo is just about the last thing in the (huge) store, so by the time we got there, Otto was ready to leave, and I suddenly turned into a contestant on “Let’s Make a Deal,” ala “I think we should get two stalks. No, wait. Three. Yes, definitely three. Hang on. Maybe just one? Wait, what if we get four and pot them separately….”

I continued talking through the possibilities while Otto writhed on the floor, pretending to be dying from old age and boredom. It was cute. 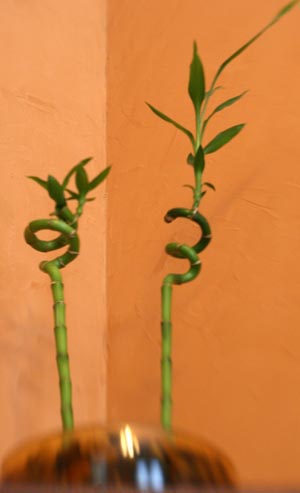 In the end, I settled on three stalks—said to represent happiness and prosperity. We brought them home and set them in a bowl with some rocks, filled it with water, and put it in the corner of the dining room. I them commenced wondering if they were actually alive, because for a long time they looked exactly the same as when we’d brought them home.

And then, one day, the middle stalk turned yellow on the top. First one leaf, then another, and then a third. Over the course of a few weeks, half the stalk had turned yellow, and when it started to shrivel I had to take action—I pulled the dying stalk and repositioned the other two and pretended I’d meant to have two all along.

Since then, the two remaining stalks have grown like crazy. It turns out that two bamboo stalks represent “double luck” and—above all—love.

So maybe we don’t get happiness and prosperity, or we don’t get it all the time, anyway. But I suppose it’s a much more accurate depiction of our household to have that little reminder in the corner that we always, always have love.