When the children were little, we had a set of alphabet fridge magnets, as is mandated by law for all middle-class suburbanites with children. I never got rid of those magnets—at least, the ones that were left, as several disappeared over the years—until we moved to Georgia. I took them off the old fridge and just… tossed them in the trash. Why pay to move a partial alphabet when my kids had pretty much outgrown that sort of play, anyway?

Shortly after moving in to the house here, though, I came across a set of poetry magnets that I thought might be fun to have out on the fridge. I went ahead and put them up and spelled out a sentence and then waited to see what would happen.

What happened was flat-out literary warfare: One child would “write” something, then the other would come along and steal words for their own sentence. Then there would be crying and yelling and fighting, and I couldn’t stand it. After two days I took the magnets down.

For Christmas we received a care package in the mail from a dear friend, and one of the items within was… a poetry magnet set! This one was peace-themed, with soothing words like “love,” “serenity,” and “harmony.” Surely this was a SIGN that the magnets—and the children—could live together amicably, right?

“I am putting these magnets on the fridge,” I announced one evening. “Does anyone remember what happened LAST TIME?” They both nodded, sad. “Right. Let’s not have a repeat of that. You’re old enough that this shouldn’t be a problem. These magnets are for EVERYONE to use. But if there is bickering, I am going to take them down.”

“You will not steal words from each others’ creations. You will SHARE and be RESPECTFUL of each other.”

“We will!” they assured me.

“I mean it,” I added, giving them a Meaningful Look, because I’m mean like that.

“We know!” they replied, arms around each other, dancing around the kitchen to demonstrate just how serene and harmonious (and goofy) they are.

So the magnets went up. We each wrote something, and I waited for the inevitable clash.

It came in about fifteen minutes.

“Chickie used the word I need!” said Monkey. She immediately began to protest, while I suggested he use something else and reminded them, again, that I would take the magnets down if they became a problem. Monkey made do and peace was restored.

A few days later, I came upon Chickadee doing a bit of rearranging one evening.

“What are you doing?” I asked, suspicious. It didn’t help that she leapt about ten feet in the air when I approached her.

“Nothing!” she said. “I’m not doing anything. I’m, uh, straightening the words out.” I surveyed the freezer door. My last sentence had been rearranged. So had Otto’s. Monkey’s was missing a couple of key words. I looked back at Chickadee.

“DO NOT TORMENT YOUR BROTHER,” I said.

“—was going upstairs to get ready for bed! Good idea!”

I started to fix what she’d moved, then I decided to just wait and see what would happen.

There’s a fascinating dynamic between my children; on the one hand, Chickadee is the oldest, the mother hen, the unquestionable alpha of the duo. On the other hand, Monkey requires that many things be JUST SO, and suffers a good deal of consternation when they’re not. And the interesting thing is that he generally harbors such a deep admiration of his sister and her preferences that she is just about the only person for whom he will suspend his self-imposed rules and let things be Different Than He Wants, but even then, his limits are easily reached.

So there was no question in my mind that Monkey would notice his work had been disrupted. The question was, how would he respond? And how hard would Chickadee push back when he did?

Nothing happened for a day. And then the next evening I heard giggling in the kitchen and came upon this: 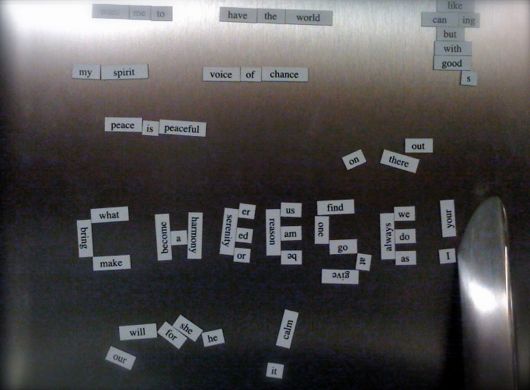 Monkey was terribly proud of himself. “You said we could spell things!” he told me, between giggles. “I spelled my FAVORITE thing!”

Chickadee came strolling in to see what all the laughing was about. “Monkey, you’re so weird,” she sighed, shaking her head. He just continued beaming at her until she added, “But I do like the exclamation point. Nice touch.”

I’ve been waiting for Chickadee to lay sabotage to this creation, but she hasn’t moved a thing. Funny; he said “Cheese!” and she said nothing at all, but I hear a message of peace and harmony in there, loud and clear.