The post I wrote for BlogHer yesterday about writing unsavory things about your children was a hard one for me. The subject of my post has, in my mind, crossed the line. Hell, she can’t even SEE the line anymore. It seems pretty black and white, to me.

But I write about my kids. Many writers I admire write about their kids. I think it can be done respectfully, and I cringe when I hear the baby-with-the-bathwater arguments for parents to never say a single word that’s less than glowing about their offspring. It’s dangerous territory, but I refuse to believe a few people making poor choices should mean that everyone else has to just shut up.

So this has been on my mind. And I’ve been taking stock of what I say and what I don’t. I don’t think I always get it right (though I hope I do most of the time, of course), but it’s part of what I deal with when it comes to sharing, here.

If you think I’ve written less, here, this past month, it’s because I have. It’s because we’re struggling with some things and while it was easy enough for me to decide “this is not my story to tell right now,” it was harder to remove all of that from my brain and find something else that felt worth discussing, instead.

Sometimes one of my kids is rotten and I come here and write about it and say, “Good lord, MY KID IS ROTTEN,” and I trust that 99.9% of you understand that while I am human and frustrated, I am also the person you’d need to go through to so much as look cross-eyed at said child, and chances are excellent that I would claw your eyes out before you got the chance.

Sometimes one of my kids is struggling and I come here and write about it and say, “This is hard and I am worried,” and I trust that 99.9% of you get what it’s like and understand that I’ve done my best to balance my need (for processing, for community, whatever) against my child’s needs (for privacy, for example).

Other times it’s too hard and too overwhelming and I say nothing, for a long time. And I begin to realize that I’m not just saying nothing HERE, I’m saying nothing to my friends. Nothing to my family. Nothing to anyone. I’m retreating and it starts to become a problem, not only because I’m not necessarily getting the support I need, but because in my desire to shield my child, I’ve actually done a disservice by not allowing others to understand what’s going on.

Yesterday I realized I’d fallen prey to this right here in our own house; Chickadee teased her brother about something and he completely fell apart, much to her surprise. And I realized that she’s getting to an age where she can understand more, and be expected to do more. I wasn’t doing either of them any favors by not discussing it.

So we sat her down and told her the truth: Monkey is struggling right now. Really struggling. And it’s our job as a family to make sure that home is where he knows he is safe and loved. I know that siblings bicker; I know that sometimes he gets on her nerves. But right now, I told her, I need you to be the big sister. He needs you to be the best big sister anyone ever had. It’s important, I told her. He needs you.

We talked some more. I saw understanding dawn on her face, followed by concern. “He’s fine, sweetie,” I reassured her. “At least, he will be. This too shall pass. Some of this other stuff will be ancient history soon enough, I think. But you’re his sister forever. And how you treat him when the rest of the world feels wrong is something he will always remember.”

“I know how to make it better, Mom,” she said, and she ran upstairs. She came down a few minutes later and reported that she was letting Monkey borrow her iPod and listen to his favorite song. Her dad just gave her that iPod; this was a grand gesture, and we all knew it. I hugged her and thanked her. She smiled and went back upstairs.

It turns out, that was only the beginning. Chickadee decided to create a little system here at home loosely based on the reward structure they use at her school; good behaviors earn fake dollars, which can later be redeemed for items. By bedtime, a complete list of prizes and their associated costs had been posted outside Monkey’s bedroom door, and he’d already been “rewarded” with three dollars for working on a jigsaw puzzle with his sister. (That was somewhat hilarious as Monkey was already so over-the-moon delighted that Chickie wanted to work the puzzle with him, he probably would’ve happily paid her three REAL dollars for the privilege.)

Last night was the happiest I’ve seen my son in a long time. 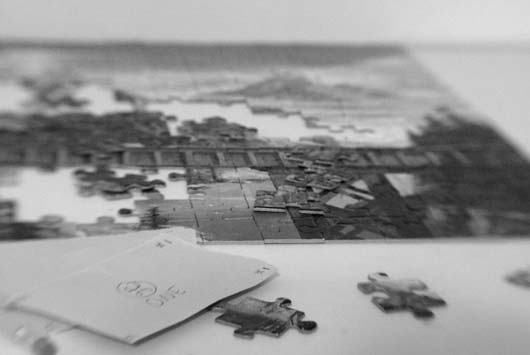 Funny, but last night was the happiest I’ve seen my daughter in a while, too. Coincidence? I don’t think so.

Will the harmony last? I can’t say. It might. It might not. Most likely it, too, will fall prey to the ebb and flow of the typical sibling relationship. But this morning Chickadee came careening down to the stairs to bid Monkey goodbye before he left. She gave him a hug and told him to have a good day at school, and he walked out the door positively giddy. “Mama!” he told me, just before he left. “I have enough Chickie dollars to get a mechanical pencil! She’s going to get it for me from the school store today.”

“Wow, I said, “that’s really nice of her. You have a pretty excellent sister.”

Now, I could tell you this story without the background of the hard time and the bit of meanness that preceded it. I could just come here and say, “Life is sunshine and rainbows and happiness and by the way, my kids are being so sweet to each other!” But to my mind, that would not only be untrue, it’d be really boring. Because it’s not JUST that they’re being sweet to each other, it’s that Monkey appreciates it more because he really needs it right now, and that Chickadee is becoming a young adult who can see beyond herself and come up with innovative ways to use her powers for good.

And it’s that sometimes grace pops up in ways you didn’t expect, giving you enough faith to keep going down even a very hard road. Those are the kinds of stories that demand to be shared. Because we all need to hear them sometimes.

Happy Love Thursday, everyone. Here’s to whatever currency makes your day a little better, and loved ones who shine so brightly, you can’t help but share them.