Lord, this has been a long week. I was sick, Otto’s been sick, yesterday Monkey was sick, and thanks to all of that, we’re all behind on work and meals have been cobbled together a la “Well, I found… a green pepper that doesn’t look too old. And a slice of cheese. And I think we have some rice. What could I make with that?” I like order and routine and this week has had precious little of that.

To top it off, Chickadee (having gotten sick last week, instead) has been trucking along as the sole healthy member of the family, but with her skin having taken another turn for the worse. She so dreads the steroids and other interventions that at this point she just dons long sleeves and long pants and hopes I just don’t notice. I do notice, of course, and yesterday I was finally well enough to play Spend The Entire Day On The Phone Trying To Make Headway. It’s my least favorite game, but it was time.

So the good news is that despite her issues with the spacing of kids in our family, the nice dermatologist called me right back and said the magic words I’ve been wanting to hear: “I think it’s time for the big guns. I’d like to send you to a specialist at Emory.”

I may have done a little dance. She went on to tell me why this particular specialist is exactly the right person to see, precisely the doctor who will be able to figure out The Mystery Of The Rash if anyone can, etc. “But she’s very in demand,” she cautioned. “I’ll call over there for you, but then you’ll have to call for an appointment, and you may have to wait a while.” I thanked her profusely, and she called back a few minutes later to confirm that it was a go, I should go ahead and call and get scheduled.

I called. I waited on hold for 25 minutes before being told that sorry, Dr. Expert is booked up through the end of the year and they’re not scheduling any new patients for her. EVER. When I stammered that the other doc was referring us, I was told that I might be able to get an appointment to see Dr. Expert at Grady, instead. I never go into Atlanta unless being lured by the siren song of Trader Joe’s or Ikea, so I know nothing about Grady. I asked where it was. The receptionist said, “Downtown,” like I was a moron. I meekly thanked her, took down the Grady number, and called.

I waited on hold for 15 minutes before being dumped into someone’s voicemail, whereupon I left a message that has yet to be returned. Hopes are not running particularly high, here.

[This section redacted due to chronic foot in mouth disease. Apologies.]

So. Attempt to take care of my kid: FAILED.

Yesterday evening Chickadee was engaging in her latest hobby, which is taking out her newly-procured flute to practice and then pulling an uncanny Don Music impersonation as she discovers, once again, that she’s actually completely unable to make any SOUND with the damn thing.

Here, apparently, is how band works at the middle school: You sign up. Your parents spend hundreds of dollars on an instrument. And then you go to a class filled with a hundred of your classmates and spend a lot of time tapping your toes. Your individualized instruction time in each class amounts to approximately three seconds. And if, as my daughter was, you happen to be absent on the day the flutes are given instruction in embouchure, the band instructor will tell you, “Just keep practicing” without actually, you know, instructing you on what the hell you’re supposed to actually PRACTICE.

As a result, there is now a “test” on Friday wherein Chickadee has to be able to play an introductory piece in her book, and last night—still unable to elicit a sound from the stupid flute—my daughter began to completely freak out.

Having completely failed to procure necessary medical attention for her, earlier in the day, I of course resolved to remedy her flute problem, instead. Because of all those years I spent playing flute and teaching music.

(Except, uh, I never played flute or taught music. Details.)

We sat down together and read the instructions in her flute book. I may have Googled some tips, as well. With a bit of futzing around, we discovered that I was able to correctly blow into the flute so as to produce a tone, so first I made her watch me do it, then we set up camp in my bathroom so that she could attempt to duplicate what I was doing while watching herself in the mirror.

Chickadee became progressively more frustrated as her blowing continued to produce nothing more than a stray squeak here and there. “It’s like whistling, but sort of down,” I tried. No dice. “Here, put the flute down and practice directing air into this straw,” I suggested, once I’d ascertained that she was having trouble narrowing the airstream sufficiently. She sat on my bathroom counter and held a drinking straw under her lower lip, brow furrowed with the concentration of trying to direct her breath into the little hole. “Okay, this time, you blow, and I’m going to slowly roll the flute so we can see if it’s an alignment thing,” I offered, and she blew while I rocked the instrument against her chin.

I asked to see the flute again, and this time I tried it while watching myself in the mirror and studying my mouth. I consulted her book again. It said something about raising the corners of the mouth while keeping the lower lip relaxed, which earlier in the evening Chickadee had assured me was completely impossible.

“Hey, I want to try one more thing,” I said, passing the flute back to her. “Get yourself lined up, okay?” She raised the flute to her mouth, sighing, shoulders slumped. “Posture, girl!” I poked her in the waist and she giggled and straightened up, and I pointed at her mouth in the mirror. “THAT,” I said, “That’s what you’re missing, right there.” She quirked an eyebrow at me. “I want you to see if you can play while you’re smiling.” She pulled a giant, fake grin and sputtered over the mouthpiece. “NOOOOOO,” I said, “not like THAT.” She giggled. “Just a little HINT of a smile. Like you’re trying NOT to smile. Know what I mean?”

She nodded, and settled the flute against her chin. And blew. And it sounded just like a flute being played.

She gasped and nearly dropped the darn thing.

I suggested she play it through a couple more times, and I left her to it. She played it four more times and then came and flopped down on the couch next to me, rubbing her lower lip. “Feels different, huh?” I asked.

“Well, you’ve got it now. Keep practicing and soon it’ll feel normal.” She nodded. I waited. She sat there. So I continued, “And thanks, Mom, for spending all that time helping me even though you don’t know anything about flute!”

She laughed and rolled her eyes. “THANKS, MOM, FOR SPENDING ALL THAT TIME HELPING ME EVEN THOUGH YOU DON’T KNOW ANYTHING ABOUT FLUTE!”

I nodded. “Also, Mom, you are the greatest mom ever. And I will never misbehave again because I love you so much.”

I sent her to bed.

And left her a little reminder in her flute case. 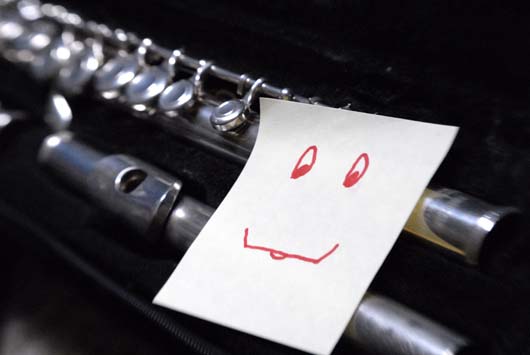 Happy Love Thursday, everyone. I know that few of life’s problems can be solved with a smile—perhaps fewer and fewer the older we get, even—but I’m not above savoring the ones that can. I hope you aren’t, either.