By Mir
August 7, 2009
Category Haven't been hit by lightning yet!

Otto and I decided that it would be certain catastrophe to take the kids to one of those “adoption day” events to look at dogs. Surely one of them would fall in love with the first dog they laid eyes on, and tragedy would ensue when we were unwilling to embrace that pup on the spot.

One of the dogs I’ve had my eye on on Petfinder was listed as being at a local rescue, and we figured we’d go check him out today BEFORE potentially dealing with a child enamored of him, etc.

So we got the kids off to school and headed over, and the woman there asked which dog we were interested in and we told her, and she disappeared inside and came back out DRAGGING the most frightened dog I’ve ever seen in my life. He was shaking. He wouldn’t make eye contact. His tail was down.

Everything I’ve read says that’s a dog with serious problems, and probably a history of abuse. A tough case. A lot of work. Naturally I fell in love with him immediately. 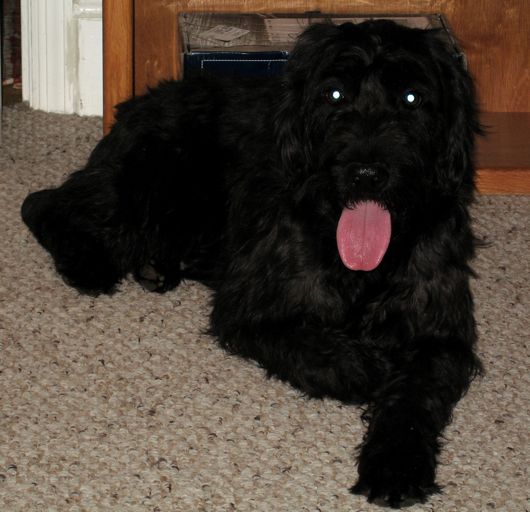 Go ahead. You look at that face and tell me you could’ve left him there.

His name is Super, and he’s about three years old, and he’s a labradoodle. Probably.

By the time we got home, he was unwilling to let me out of his sight. He’s still very submissive and worried, but we’ll see what the weekend brings.

Officially we have agreed to foster him for two weeks. Depending on his progress, we may not end up keeping him. I of course am certain there’s a wonderful, fun, happy dog in there. But if there isn’t—or if he’s truly too far gone for it to come back out—we won’t be able to adopt him. And explaining that part to the kids is going to be hard, but unfortunately with a dog like this there’s just no way to know until we work with him for a while whether or not this can be a success in the long term.

Yes, we’re taking him to the vet. And consulting a trainer. And maybe giving him lots of belly rubs. And hopefully… Super will live up to his name.

Joshilyn has already suggested we rename him. To SuperGreat. If he stays, I totally will.