As predicted, I remained in Colorado just long enough to get adjusted to Mountain Time and then come home and be really tired. I couldn’t seem to get to bed at a reasonable time last night, but had to get up to the alarm this morning, and the net result is that I am now typing this while face-down in a very large cup of coffee.

That’s just as well, because it’s good nasal irrigation. I don’t know if you know this, but Georgia is just a WEE BIT more humid than Colorado. It’s true! And as a result, if you take southern nasal membranes up into the Rockies, it’s only a matter of days before all of your boogers calcify and leave you with a crispy dried-out nose that feels like it’s full of glass shards. YOU’RE WELCOME. That was such a wonderful experience for me, I just felt like I had to share the joy on that one.

It was such a wonderful trip, though, that it was not to be ruined by a dessicated nose or even the marked lack of oxygen.

“You may feel weak or dizzy from the altitude,” Kira warned me.

“Really?” I said. “I feel fine.” And you know, in general I’m a pretty delicate flower, so when I continued to feel fine for the first couple of days, I concluded that I was merely impervious to altitude changes.

Of course, I spent those first couple of days sitting around the house, bouncing a baby on my lap. Not exactly strenuous activity.

Then we were strawberry picking, which is one of my very favorite things to do. I took my container, walked down the row, stopped to stoop and pick some berries, walked some more, stooped again, stood up…

… and nearly passed out. Okay, then! That’s a level of delicate flower-ism really above and beyond, even for me. Heh.

Although I spent considerable time cooing over the baby, I was also watching and hanging out with and getting to know Kira’s boys, and it was an endless source of amazement, considering all of the ways in which they were like or unlike my own children. “That is EXACTLY what Monkey would do, there,” I’d comment to Kira, when one of the boys would do the I’m-not-the-one-in-trouble-please-admire-my-holy-glow routine; or “Chickadee might’ve tried that,” when one of her brood tried to talk his way out of a transgression.

When Kira last came here to visit, Monkey bounced around and chattered to her as he does to everyone. Chickadee was somewhat shyer, as she tends to be, but in the end my favorite girls bonded before Kira had to leave us.

I’m not sure what I expected, but Kira’s boys didn’t so much welcome me with open arms (although they did) as they just pulled me directly into their puppy pile. It took them all of about five minutes to decide that I was part of the pack, and although I knew OF them (for years!), it was a remarkable experience to sit with them at breakfast; to watch them zoom around me, stopping to share some tidbit or tickle their sister’s cheeks; to hear them include me in their bedtime prayers. I have always known Kira to be a remarkable woman, but to watch her boys swirl around her is to gain a whole new appreciation for her strength. There isn’t a person on the planet who would think less of her if her boys were rowdy and unmanageable, given everything they’ve been through; and yes, they were rowdy, but also considerate and thoughtful and charming and on their way to becoming the kind of men this world needs.

I hope to someday be half the mother she is. Truly.

So yes, I sat and snoogled the baby for countless hours, but I also played and talked with the boys, and Kira and I had countless “What do you think it would be like if we got ALL of the kids together?” conversations. We speculated on whether Monkey would be most drawn to Raphael or Max, and mused on Chickadee’s similarities to Max but how my money was on her hanging out with Tre.

I called home and chatted with Otto; he looked up state parks in Kira’s area and sent me a link to the closest one. “Next year’s trip!”

The time came to go and Sophia, of course, was the only one unbothered; sometimes I think having no concept of object permanence is kind of a blessing. I did get a little bit misty thinking that the next time I see her, she won’t remember me. The boys, however, argued about which one of them was small enough to fit in my suitcase. Tre suggested they “forget” to take me to the airport, and Raphael kept bringing me trinkets to tuck into my bag and take home with me to remember him.

I walked around to Sophia’s carseat to say goodbye to her, and then fielded the rest of them one by one. Each of the boys gave me a hug, then Kira and I hugged, and then Raphael came back for another hug, so then Max and Tre had to get second hugs, and I tried not to cry, because I didn’t want to be such a sap. Even though it was breaking my heart to go when I’d just started getting to really know them.

Then the goofiness began, and it was a little easier to leave. 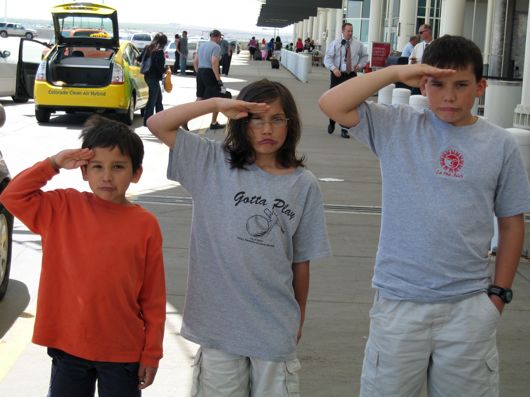 (But only a little.)

They may not have as much oxygen up there in the Rockies, but they sure do have plenty of everything else I love.

I can’t wait to bring the whole family to play. Next year, boys. Save me some hugs.