And the living is easy(ish)

When I was a kid I went to camp. Always. And I loved it—don’t get me wrong—but I feel like the proper reward for everyone in the family for surviving another year of getting up at o’dark thirty five days a week to get to school is a summer full of… relaxing. At home. Where Mom is not required to drive anyone anywhere.

It’s a wonderful thing, having children old enough that they can more or less entertain themselves. We have some very simple daily goals here at Casa Mir. We take care of the garden. Both kids are enrolled in the summer reading program at our library. Piano lessons continue, as do prolonged negotiations over whether or not twenty minutes of sitting AT the piano and really THINKING about practicing counts as practice. There is swimming. Lots and lots and lots of swimming. There is bike-riding, when it’s not too hot. There is going outside and then coming back in and whining that it’s too hot outside. There are various trips here and there to break things up.

Stuff like that. Sounds like an idyllic way to spend the summer, yes? I think it sounds marvelous.

[Of course, I’m still working, while the rest of my family is on vacation. So even if they were spending every day just laying on the floor and staring at the ceiling, I’d think THAT sounded pretty good, too. I realize I’m a little biased with the whole “Wah, I never get to take a real vacation” thing.]

Anyway. My point is that the children don’t exactly have it HARD, this summer. They seem pretty happy. They spend a fair amount of their time bickering—because that’s their job, according to section 5, article 4.2 of the Sibling Contract—but overall, I think it’s a pretty sweet gig they’ve got going on, there. I’ve even been letting them watch TELEVISION, for crying out loud. (There is almost no television during the school year, because I am an inhumane monster.)

Now, I don’t know if you’ve noticed, but there’s this whole recession thing going on? Maybe you’ve heard something about it. When you put together a recession with a tightwad such as myself who happens to be a freelancer, the resultant angst goes all the way up to 11. There are two ways one can deal with such a thing: 1) Run around in circles screaming “THE SKY IS FALLING!” or 2) work as much as possible.

I’ve opted for the latter choice. And I’ll be perfectly honest; it really kind of sucks. I am not the greatest person with work-life balance under the best of circumstances, and to be working even more than usual when the kids are around all day is far from ideal. They have each other, they have Otto, they have plenty to do… but still. I am often busy.

So yesterday I offered up a craft to the children, because nothing makes their hearts go pitty-pat like the opportunity to fling little bits of paper and foam shapes all over my kitchen, and I figured it would give me some more time during which I could work. Before I sat them down I said, “Wait. Is it clean upstairs?” They both did the deer-in-the-headlights thing, and I—excellent mom-radar operator than I am—declared, “This project isn’t starting until your rooms are cleaned up. Get to it.”

They left, and came back not too much later. When asked if their rooms were clean they swore up and down that they were. I allowed them to begin the project, and soon the kitchen was knee-deep in glittery detritus.

Fast forward to dinnertime; Otto was grilling (mmmm… charred food) and I was taking sheets out of the dryer, and announced I’d be headed upstairs to put the clean sheets on the kids’ bed. The children nodded, deep in their project, and up I went.

And then my head exploded, because their rooms were only clean if by “clean” they meant “appearing to have been struck by a tornado.” There were books on the floor (my NUMBER ONE PET PEEVE) and papers everywhere and clothes and just a proliferation of STUFF. And to top it off, their bathroom resembled one I once saw in a frat house. The part that makes me craziest, of course, is that they’d lied to me about picking up.

Sooooo there was some raising of voices and a big bin to collect everything left on the floor (as I wandered around making Crazy Eyes declaring, “This is now mine! And this! And THIS!”) and the children were remorseful and dinner was a quiet affair, followed by a directive to get ready for bed and then come down for a Family Meeting.

And I talked and talked to them about how we don’t ask very much of them, and summer is supposed to be fun, and it’s really not that hard to just put things away when you’re done with them or at LEAST not leave them on the floor, and about how I want to enjoy our time as a family rather than feeling like I’m constantly begging them to just take care of some very basic tidying up, and on and on and on. (Otto was a lot more succinct than I was. Pretend you’re shocked.)

Then Chickadee piped up in a little voice that maybe they’ve acting out because they’re feeling a little, you know, bored and neglected.

For about half a second I felt a wave of guilt crash over me, because I HAVE been working all the time and I really HAVEN’T spent all the time I want to, with them, and maybe they ARE acting out because they need more of me…

… and then the moment passed and I curtly informed my darling offspring that that was hardly an excuse, ESPECIALLY considering all of the places Otto has taken them and playdates they’ve had with friends, etc. They agreed. And then I may have promised to spend more time with them this week, anyway, because it’s a good idea, even though they’re a couple of slobby manipulators.

So this morning, Monkey and I were up before everyone else, and we went out to the garden together to pick our daily haul. And I was reminded, once again, that although my children are rotten, there’s really no one else I’d rather spend my time with.

I mean, really, where else am I going to learn about the joys of squashtennae? 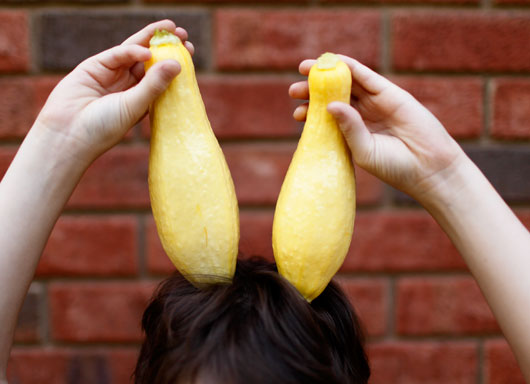