Love’s a matter of perspective

We went for a walk after dinner last night. Chickadee alternated inserting herself between me and Otto so that we couldn’t hold hands, grabbing one or the other of us from the outside and trying to pull us away from the other one, or marching up ahead in a variety of odd skips and flails. (Our very own personal Ministry of Silly Walks!)

I don’t know how the conversation started, but Chickie asked for an explanation of a situation we’d been chatting about, wherein a blended family was somewhat complicated by the fact that the eventual couple actually had a child together before either of them were divorced from their first spouses. It’s not really the sort of thing I thought I’d be explaining to my 11-year-old, but these things happen. And the problem, for me, is that the people in question have since been together for a very long time, and I felt like I needed to make it clear to my daughter that this is very much the exception to the rule.

“Just tuck this away for future reference,” I told her. “But this is something you need to learn NOW, before hormones take over and your brain rots.”

She laughed at me, turning to walk backwards, ahead of us, so that we could see her giggles and eyerolls as she rattled off her response. “Yes, Mom. I KNOW. ‘If a person cheats on someone else to be with you, chances are he’ll cheat on YOU to be with someone else. Trust is the foundation of a good relationship. A boy who breaks a girl’s trust once will probably do it again.'”

“That’s right,” I replied, hoping that despite her treating this all as a joke, something would sink in. “And the same is true for girls, too, honey. There is going to come a day when you have a boyfriend and you decide you like some other boy better, and maybe you’ll think it makes sense to just date that second boy behind the first boy’s back, but YOU WILL NOT DO THAT, because it’s dishonest and disrespectful. If your feelings change, well, that happens sometimes. But you will be HONEST and do the right thing.”

“I know!” she called back, skipping ahead.

“And if a boy cheats on you he’s not worth your time!” I added, for good measure. “No matter how much you think you love him!” She flapped an “I know, I know” hand in my general direction and kept on going. Otto chuckled and squeezed my hand.

I worry about this stuff. I don’t know why. Maybe it’s because I know my daughter’s heart, and I know I’m going to have to watch it break over the years, at different times and in different ways, and in my own clumsy way I’m trying to make sure she has the armor she needs. I know all too well how love (particularly of the puppy version) can cloud your vision, and if I can plant a seed that gives her even a glimmer of unclouded vision later, when she needs it, well, I guess that’s all I can do.

Lots of things in life are not as they seem, and our job is to find the right perspective.

In addition to our traditional garden plants, the current tally stands at six different dwarf fruit trees, as well. Only one of them—the dwarf lemon—currently has fruit. It came with fruit on it, which was a little weird. As it got over its root shock from replanting and the three lemons continued to sit on the stem, green and ungrowing, Otto commented more than once that he suspected they were plastic.

And then as Chickadee bounded up the deck steps, a few days ago, one of the lemons popped right off the plant. (If fell down between the steps, of course, and we had to go on a reconnaissance mission to find it.)

“I guess it was ready!” I said, brushing it off.

But we put Otto on the case. See? Totally mighty lemon, right here:

A little green, sure, but still. That’s pretty awesome, right? 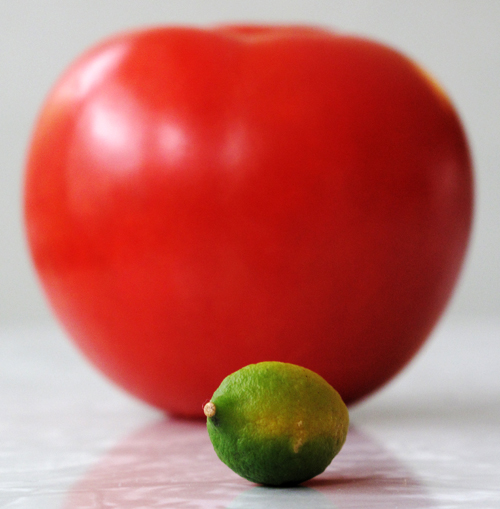 That’s not an even particularly big tomato, there. That little lemon is about the size of an olive.

I rather enjoyed having a visual object-lesson to go with our recent discussions. I am totally whipping out these pictures the first time Chickadee’s done wrong, and I’ll be all “Do you get it now? HE’S THE LEMON!” and she’ll cry and wish she had a different mom, one who’s a little less weird.

Happy Love Thursday, everyone. Here’s to greater perspective in life, love, and even lemons.