Love is the journey, not the destination

As the youngest and possibly most impulsive and least patient member of our family, I oftentimes wonder if Monkey feels like his entire life is just everyone telling him NO, over and over again. Some days, it feels like that’s all I do. Put your feet down and sit properly. Please don’t bang. Stop jiggling. Don’t hum at the table. Because she’s older than you are. Because that’s the way it is. Because I said so. No, you may not go ride your bike in the rain. Why is there laundry all over the floor. What happened here??

It’s not exactly the flowers and rainbows and life of constant kisses and hugs and ice cream that I’d always dreamed of, when I pictured motherhood.

One of Monkey’s most endearing qualities, though, is that he’s relentlessly cheerful about 90% of the time. (During the remaining 10% it is recommended that you find the nearest bomb shelter for your own personal safety, but that’s another topic for another day.) And my Monkey has recently discovered a new talent.

It turns out that Monkey is a Mario Kart savant.

I have to say, I’m truly surprised by how much the entire family is enjoying the Wii. But the favorite game, so far, is Mario Kart. Hands down. And while we all enjoy it, it’s Monkey who always finishes first, who memorizes courses in secret compartments of his brain and drives his way to victory time and time again.

He’ll play by himself quite happily, but lately he’s taken to sidling into my office and standing there on his tiptoes with his hands behind his back until I turn to him.

Sometimes I actually am “super-busy.” But sometimes I’m not, and I know what’s coming. “Oh, I could probably take a break, Son. What’s up?”

Then that smile that slays me cracks open his face as he reveals the steering wheel he’s been holding. He holds it out to me with a flourish. “Want to play a little Mario Kart?” he asks, in the same voice you might suggest that drugs are pretty cool, kid, and maybe you should just try it to see if you like it.

It’s an offer I can’t refuse.

Monkey likes us to race as a team, so that we can cheer for each other. The thing is, I’m perfectly fine at Mario Kart as long as it’s a closed race track (only about half of them are). On courses where you can drive off the edge of the world into a canyon or lava or water, I am forever going kamikaze by accident. You’d think that a kid like Monkey—who likes order and perfection—would find this infuriating.

But this is my secret: The worse my driving, the more I like playing with him.

On games where we finish 1st and 2nd, Monkey cheers and high-fives me and tells me I did a great job.

On games where I keep falling off the track and find myself in last place, the student becomes the master.

“That’s okay, Mom,” he calls, as my car sizzles into nothingness in the lava while I yelp, and his car continues zooming ’round the course in first place. “You’ll catch up. And all that really matters is that you’re having fun and trying your best.”

“My best kind of SUCKS,” I’ll point out, if I’m feeling a little frustrated by lack of finesse.

“Your best is AWESOME,” he corrects me. “Look! You already passed another car! GREAT JOB, MOM!”

Here I usually mutter as my car is zapped by lightning or some other atrocity.

“I know you can do it,” he tells me, echoing words I’ve said to him countless times and never really knew if he was hearing. “You can do anything you put your mind to! And we are having such a great time, it really doesn’t matter if we win, anyway.”

When he finishes ahead of me—as he so often does—he scoots over on the couch and just barely rests his chin on my shoulder and acts as navigator. “Stay to the left up here. PERFECT! Now watch out for the caterpillar. YOU DID IT! You’re almost done! Keep it up! FINISHED! Mom, tenth place is really good for that track. I’m proud of you!”

I don’t win at Mario Kart very often. Not according to the Wii, anyway. Funny, though—I feel like a winner every single time we play. Who knew a few hunks of plastic could bring me such a precious gift? 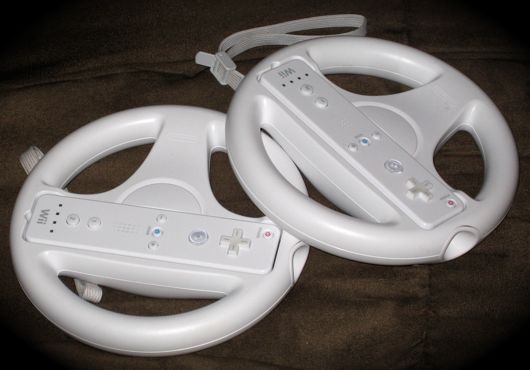 Happy Love Thursday, everyone. May we all pay less attention to the supposed goal, and spend more time savoring the trip.