By Mir
December 4, 2008
Category Ottomatic For the People

I have a thing about birthdays.

The whys and wherefores and traumas—real or imagined—therein are not important right now, but for many years, I hated birthdays. I tried to ignore my own, and my uncomfortable attempts to celebrate on others’ special days were, well, less than stellar.

Eventually I outgrew this. (Translation: Eventually I pulled my head out of my ass. You’re welcome!) And then I began to LOVE birthdays! Yay! Let’s make it awesome for you! This process was greatly accelerated once I became a mother, too. Because nothing says “and now you shall have the party I never did, as a demonstration of my love for you” like Pin The Alien In The Spaceship, Little Buzz Lightyear. Or something.

Otto is just eight months older than I am, so it’s my job to quietly endure the three months while we’re the same age and then rejoice once he’s a year older, again. Because I am super at math, and also arbitrary rules like My Man Must Be Older Than Me.

And y’all know I love Otto to pieces, and you’ve probably picked up that he’s really not an easy guy to pamper in any way, so I would love the chance his birthday affords us to fuss over him REGARDLESS of anything else. There’s little better than the excuse to spoil someone you love.

But there’s more to it, for me.

Otto and I met nineteen years ago when we were sophomores in college. We met in September, and by the time his birthday rolled around in December I was so deeply infatuated with him I would’ve seized any excuse to declare that kismet was at work, trying to unite us. And believe me when I tell you that BOTH of us were utterly INSUFFERABLE back then—Otto was the very picture of the angry young man, fully aware that I was pining for him and maintaining an ambivalence that neither dashed my hopes nor confirmed them; and me, I was a great big gaping, walking wound most of the time. I was DEEP. I wanted you to KNOW just how DEEP I was. Oh, for the time machine which would allow me to smack my 18-year-old self upside the head….

What a lovely couple we would’ve made! (Our prediction, in retrospect: Had we ever managed a romance, back then, we would’ve had one awesome week—two, tops—followed by a vast and fiery mutual hatred. Too bad we never worked that out, huh?)

Anyway. When I found out when Otto’s birthday was, back then, I took it upon myself to enlighten him as to why this date was so significant and proof of our predestination to be together. I don’t remember his reaction, and I bet he doesn’t even remember the conversation.

But the upshot was this: I had transferred to our mutual school because the year before, I’d gone to a different college, further from home. And I’d had a really rough first semester. I basically passed the weeks of my inaugural college experience by slooooowly unraveling, until I did something extraordinarily stupid which resulted in my being kicked out of school asked to take some time off. And that had all gone down the previous year, on December 4th. While Otto was turning 18, and still had no idea that we would ever meet.

My sharing of this tragic story (probably complete with a violin soundtrack, knowing me) did not cause him to declare his undying love for me on the spot, much to my chagrin.

It was a good ten years or so before this day didn’t remind me of how idiotic and screwed up I once was, and for many years the day has passed unnoticed, for me. Ancient history.

But this morning the children scurried around and whispered in too-loud voices and carefully set their homemade cards at Otto’s place at the table. They argued over where and how to best hide to jump out at him. When Otto emerged they flung themselves at him, and then pranced around while he got his breakfast and demanded he read their cards RIGHT NOW RIGHT NOW. And then they insisted we do presents RIGHT NOW RIGHT NOW. And eventually Otto looked up at me, grin on his face, one arm around each kid, and said, “This is an awesome birthday!”

And for the first time in a long time—feeling very much like my cup runneth over—I remembered that his birthday marks not just his coming into the world, but also a time when I almost left it.

Call it whatever you like, but I don’t think it’s a coincidence that those two things happened on the same date.

Today we’ll celebrate, for December 4th is a very good day indeed. And my life is so much better with Otto in it—how could I not? It’s a day that calls for goofy cards and painstakingly colored bookmarks which were then carefully “laminated” with scotch tape. 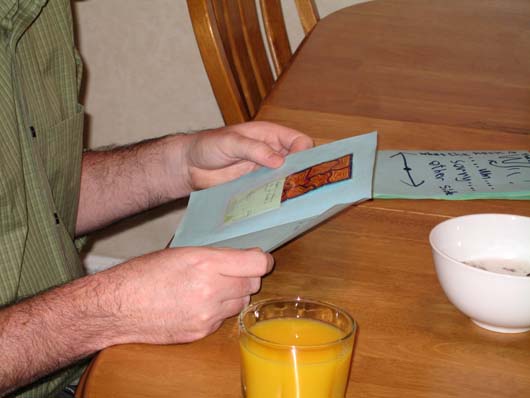 Love works itself out, and when it does, well, that’s cause for celebration. Happy birthday to my darling, my sweetheart, and one of my oldest friends. Who is still older than me.

(And a happy Love Thursday to the rest of you.)