Everyone ate their weight in sugar

Hello! I would’ve blogged last night except that I was busy trying to extract my own eyeball and go to sleep. Simultaneously.

In an effort to celebrate the 4th of July in style, we packed up the kids and headed to Joshilyn‘s house. Joss had put on her very best southern accent and assured me that they “do it up right ’round here” when she invited us a while back, and who am I to turn down such an invitation?

I had mentioned to Joss (several times) that Chickadee was dying, and I do mean DYING, to meet Maisy. Chickie loves little kids. Well I guess this had been passed along to Miss Maisy, because she greeted Chickadee at the door in her quacky little duck voice with a hearty “Are you the girl who has been wanting to meet me? Here I am!”

(It’s really very sad that Joshilyn’s children suffer from such low self-esteem. I wonder if she might be able to help them with that, somehow.)

(I also asked Maisy if she remembered the last time I’d been to her house, and she didn’t. When I told her it’d been a couple of years ago she said “Oh, I was just a baby then.” Yes, she was only 3 back then, as opposed to the world-weary 5-year-old she is now.)

I didn’t mind being single, not really, but still, it was SO NICE to be at a gathering full of couples and to realize that HEY, I ALSO HAVE A SPOUSE just like everyone else! Yay!

Our intrepid hosts of Joshilyn and Mr. Husband were a dynamic duo, what with Scott charring up animal products to perfection on his grill and Joss spitting the food we brought directly into her sink. (I am going to catch hell for telling you that. It was spicy! She doesn’t like spicy! I am repentant for even bringing these to her house.) Her friends were delightful and we were surrounded by lovely children and OH! I finally met the legendary AMY-GO!

Regular readers will recognize Amy-Go as a frequent commenter, and she is also a longtime friend of Joss’ and piemaker extraordinaire. In fact, I think she is practically perfect in every way. And she’s a gorgeous redhead! Take THAT, Mary Poppins! I LOVE LOVE LOVE meeting someone I already adore, and I not only got to meet Amy-Go (finally) but also her trio of boys, and I very nearly stuck the youngest one in my purse and brought him home.

First (about two seconds after they walked in the door) he told me that the monkeys took him away, and then later he told me that he fell in the water and drowned. He has that earnest seriousness about him that only a 2-year-old can have, and I think he would be delicious dipped in chocolate. He ALSO looked right at me when I told him to stop putting his dirty feet on the wall and smiled and did it again, so Joss’ assertion that he is actually the devil may be well-founded. I’m just sayin’.

We all sat around and ate a lot of food and tried to keep the children from killing themselves or each other (although Joss’ friend Julie’s youngest did do what appeared to be a perfect cartwheel on the stairs while attempting to bring a doll stroller down, and once the adrenaline rush of fear wore off and it was apparent that he hadn’t concussed or otherwise broken himself it was actually sort of funny, because if any one of us had done the same thing we would’ve snapped our necks like twigs, but toddlers are sproingy) and then got ready to head to the Big Festival and FIREWORKS thing because it was the 4th and that’s what you do.

There was face paint for the girls and hairspray for the boys. Joshilyn gave Chickadee a flag on her forehead and stars on her cheeks. Then the littler girls both wanted the same thing, because they all wanted to be the same. This made Chickadee swell with glee. 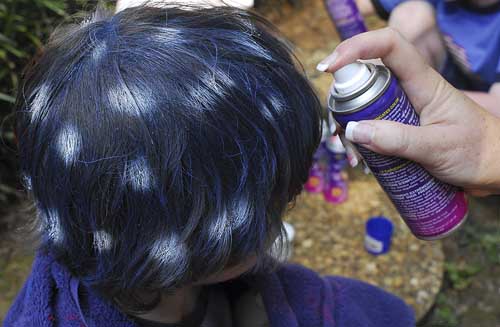 Oh say can you see, by Monkey’s spotted head?

(Also, please note Amy-Go’s flawless manicure. You’d have to hate her if she wasn’t so darn much fun.)

Once everyone was made FANCY, it was time to go.

Now—as I’d predicted—Chickadee had pretty much completely ignored Sam in favor of bossing Maisy around all day. But once we drove to the festival destination and had to hang around on a playground for a bit while waiting for the rest of our group, something interesting happened.

You might say, sometimes two hearts beat as one: 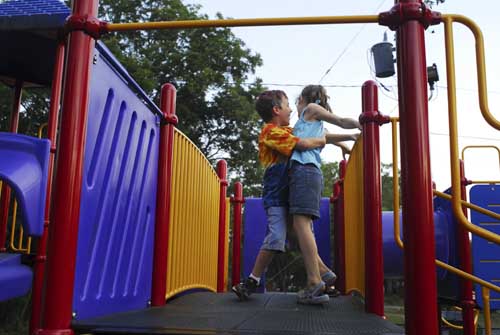 Chickadee insisted that they were just battling for supremacy, but I know better. She also told me Sam is her new boyfriend. I wonder if Sam knows?

There were bouncy houses and slides and also this sparring pit thing that I should’ve avoided like the plague but I FOOLISHLY believed that it might actually prove FUN for the kids because I was clearly suffering heat stroke. 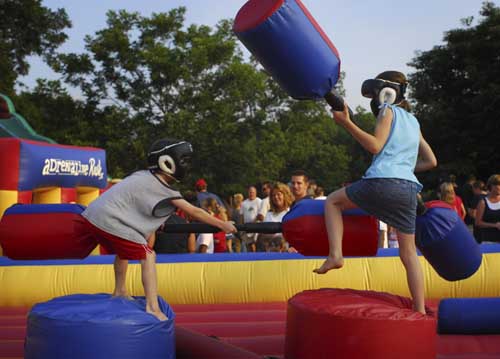 Monkey appears to have the upper hand for a moment. 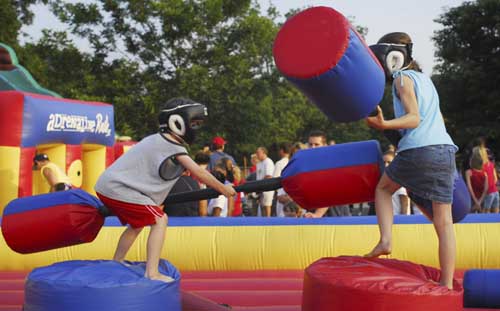 Deflected, he tries another tack.

Oh! Maybe if I hit her in the face!

Aaaaaaaand then she whomped him. Three times in a row. And my son demonstrated timeless sportsmanship by hurling his pugil stick across the ring, stomping on his helmet, and flinging himself out of the arena while screaming and crying that he was never doing anything ever again because it wasn’t fair.

So that was fun.

We managed to soothe the savage beast(s) with Icees and Dippin’ Dots and also more runs through the big inflated slides and then a bunch of fireworks. And even though we’d had an Iron Chef style pie battle back at the house (we all had to have two pieces, you understand, in the name of SCIENCE), Otto and I also had to have some fried pies at the festival because, um, well, I think because they were there. Also: Mmmmmmmm.

We got back to Joss’ house very late and tired and sticky, and the girls went right to sleep and the boys continued to debate the relative merits of various imaginary creatures until I pointed out to Sam that Monkey would be happy to talk all night but he could probably use some rest, and maybe they could finish up in the morning.

Then we adults sat around talking and drinking wine and I petted Schubert the one-eyed cat and then touched my eye and proceeded to have an allergic reaction so huge that I actually woke up with my eye gummed shut. That was charming.

All four kids were bright-eyed and bushy tailed this morning, and we were sorry to leave. Not just because we were sleepy or because I could really only see out of one eye, you understand.

We are back at Casa Box Stacks and the roof is almost! done! maybe! and I unpacked fifty more boxes this afternoon which means that I only have eleventy gazillion to go, so all in all it was a very pleasant holiday indeed.

(P.S. Pictures by Otto, of course. You can tell because they’re not blurry like mine.)