By Mir
January 17, 2007
Category Ottomatic For the People

Otto and I talk on the phone every night. Occasionally we only talk for twenty minutes or so—if it’s very late, or one of us has to go somewhere, or if I’m sick and cranky and need to sleep—and even more rarely we talk for closer to three hours; but most of the time we talk for an hour or two.

Sometimes I wonder if we’ll run out of things to talk about, what with being unable to engage in the natural pacing provided by a face-to-face relationship where you can stop talking and make out for a while when you don’t have anything to say. So far, so good. Plus, this way we don’t feel guilty catching up on the face-sucking thing when we actually ARE together.

Tonight we spent half our time surfing around Google Maps together, Otto giving me the lay of the land in the neighborhoods we’re looking at, me saying things like “What is that big area there without any trees?” and “Oh! I want to live on that street, it has a cute name!” We spent the subsequent half of the conversation discussing appropriate media storage for Otto’s gazillion CDs and surfing around looking for various cabinets he could put them in which wouldn’t require the sale of one or both children to pay for it.

It was, in the scope of our nightly talks, perhaps unremarkable and ordinary. It was our standard fare; a bit of serious discussion tempered by plenty of random and inconsequential chatter. At one point, after Otto launched an impassioned soliloquy about how ideally he’d have CD storage units “scattered around the house” (perhaps at the cost of things like chairs and beds? I wasn’t sure) there was a pause as he waited for my response.

“You’re so cute when you’re irrational,” I said, finally. My own smile widened as I listened to him laughing and I could easily picture his reaction in my mind’s eye; how his eyes would first flash and widen before crinkling at the edges as his head would tip back just a touch with the force of his laughter. I wished, for a moment—as I wish every night—that we were together instead of apart. But tonight that longing was familiar and comfortable and faded as my own giggles escaped. Soon. And until then, we’ll spend our nights on the phone, and playing with things like the Catalog Card Generator: 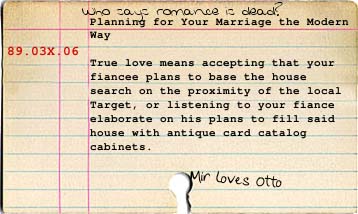 Happy Love Thursday, everyone. I hope you have someone you want to spend the next fifty or sixty years talking with about everything and nothing at all.