By Mir
October 27, 2004
Category Haven't been hit by lightning yet!

The following is an actual exchange I had on the phone with my father this evening.

Me: I’m glad you’re feeling better. Maybe now you’ll stop coughing up green stuff.
Him: Yeah. If I’m gonna cough up green stuff, I want it to be large-denomination bills!

See? I can’t help it. And the kids never had a chance.

Case in point: I present, for your consideration, Halloween of 2003. Chickadee was Madeline, right down to the red pageboy wig. Monkey was Buzz Lightyear, complete with inflatable wings that hindered his ability to walk through doorways. They were cute. They were adorable. They were nearly invisible. Why, you ask? Well, my dad and stepmom were here visiting over Halloween, and were coming out trick-or-treating with us. So they brought costumes!

Take a good look. You can click on it to see it larger. Do you think anyone looked at the kids? Really not. It may be hard to see because it’s so dark in the picture, but my father’s mask included long, curly, purple hair. 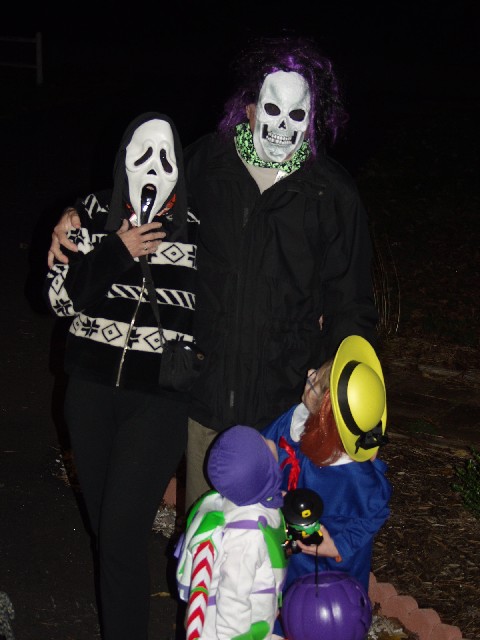 They were the hit of the neighborhood. If the picture is fuzzy, it’s because I was laughing really hard when I took it. I mean, I thought I was quite the daring sort with my glow-in-the-dark fully-jointed skeleton earrings. Those two put me to shame. My sense of humor pales in comparison. Nobody lost an eye, but the fun and games did sort of come to an end when the little girl around the corner took one look at my dad and burst into tears. Monkey kept patting her and saying, “It’s okay, that’s just my Grandpa! He’s silly!”

[Readers from my father’s office: This is the point at which–if I was feeling evil–I would suggest that you rally to have him wear this mask to Friday’s meeting. But I would never do such a thing. I’m sure you could come up with that idea all on your own, right?]