Last night I not only set Chickadee’s alarm, I turned it up to volume “wake the dead.” She’s something of a sound sleeper. So this morning, when Monkey and I were making his bed and getting him dressed and I still hadn’t heard her alarm, I went into her room to see if maybe her clock was five minutes behind everyone else’s.

She’d turned the alarm off. And was sound asleep.

“Chickadee! Get up! You turned your alarm off.”

“Oh, you’re tired? Well nevermind, then. Go back to sleep. That’s more important than the first day of school.”

“Mooooooooooooom!!” Heheh. I’ll have to be careful about that. By the second week of school she may just agree with me and fall asleep again.

Today, however, was exciting. Even though we did our first year of “real school” last year, Chickadee attended private kindergarten at our daycare center. (Public kindergarten here is only half day, so if you work–which I did, when the year started–and need daycare, you have to go private.) This meant that I drove her to and from school, and she missed the ultimate hallmark of Being A Big Kid: riding the bus.

So we got up and dressed and brushed and scrubbed and braided and fed… and we still had about half an hour. The kids asked to watch television for a bit and I agreed. They sat there while I finished writing a note on Chickadee’s lunch napkin (yeah, I’m that kind of mom… barf bags to your left) and getting ready. Then we took some pictures, and headed out to the bus stop around the corner.

We were early. On account of I got tired of the two of them bouncing around the house at warp speed. I figured they could run off a little energy outside, instead. We stood at the bus stop and made meaningful conversation for a while.

“Okay then. Put Chickadee down.”

“Oh good lord. Nobody touch anybody else!”

Then we were saved by the family whose driveway we were standing in. I may have mentioned before that I’ve found the whole Getting To Know Your Neighbors thing kind of difficult, here in New England. First of all, there’s the whole 9-month-long winter thing, which means folks just aren’t outside all that often for the majority of the year. Also, I find folks around here rather standoffish most of the time. I have no problem with being friendly and starting conversations and whatnot, but neither do I want to garner a reputation as That Crazy Loud Pushy Woman Down The Street. My reputation as That Divorced Woman is enough, thanks. So out of this house came three girls and their mom, and despite having been neighbors for several years, I had never seen any of them before. Ever.

So I stuck out my hand and introduced myself, and the mom had to shift her cigarette to the hand holding her coffee in order to shake my hand. I just kept smiling in spite of the fact that I loathe smoking and the smell of smoke, because I was Being Neighborly and saying “ewwwww GROSS!” is not a good way to start a relationship. (I know that some of you, even some of you whom I adore, are smokers. Do not send me hate mail. I do not hate smokers, I just hate smoking, and if you’re being honest, even those of you who are consummate slaves to the cancer sticks also know that smoking is disgusting.)

So we moms chatted a bit while we waited for the bus to come, and the kids didn’t talk to each other at all, unless you count Monkey’s running soliloquy (“My name is Monkey! And I am not getting on the bus, but my sister is, and I am here dropping her off, and then I will go with Mama in the car to my school cuz I am still just little but I really like my school and someday when I’m bigger I’ll ride the bus, too!”) while the girls all studied their toes. But I was mostly just grateful that my children didn’t start pointing out how disgusting smoking is, because that’s usually what they do when they see a person with a cigarette.

There are many semi-famous stories in my family about my antics as a child. One of the most infamous is the tale of my first day of kindergarten, when my mother dutifully walked me down to the bus stop with her camera in hand. I had been instructed to step up onto the bus and turn around for a picture, but when the bus finally arrived I was so excited that I flew up the steps and completely forgot to wave until I’d reached a seat halfway back. I waved out the window, but my mother was furious. And our photo album holds a blurry picture of my backside running up the bus steps. There is no greater taunt of a payback than a child just like you. This morning I tried to get a picture of Chickadee getting on the bus and all four girls crowded in so fast that I didn’t even get an adorable blurry tushie shot. 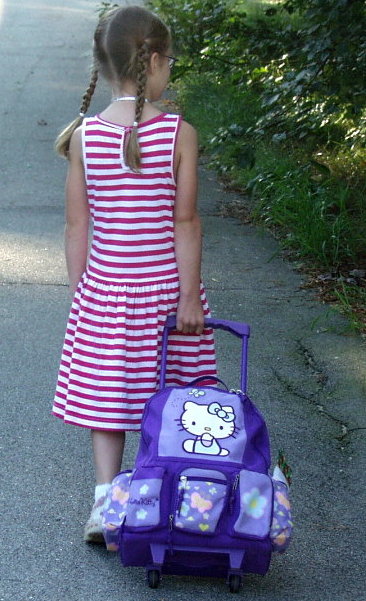 I stepped up onto the bus, myself, to talk to the bus driver about the protocol for her getting off at daycare this afternoon. By that time, Chickadee had made her way to the back, been greeted by several thrilled cohorts (our local bus routes are plotted by drunken, blindfolded board members throwing darts at a map, I think… several of the kids she knew don’t live anywhere near us), and forgotten that I existed. It’s a good thing I had the foresight to take a picture of her back while we were walking out, this morning.

Monkey and I smiled and waved while the bus pulled away. We said good-bye to the other mom and walked back to the house. Monkey waxed philosophic the entire drive to school about how there were lots of kids on that bus and he couldn’t wait to ride the bus but riding with me in the car was pretty good, too. I got him settled in down at his classroom, then was wished luck on my interview by the director while I was on my way out. I thought that was very sweet. Sure, she has a vested interest in me continuing to have the money to pay tuition, but still.

And thus begins a new era for our family. I’m drowning any little “gah my babies are growing up” vibes in a huge cup of really good, over-priced coffee. After a while here I’ll go see if I remember how to put on make-up. It’s an exciting day for all of us. They are going to be so impressed with me this afternoon, they will hire me on the spot. Or I’ll cry and tell them I didn’t get a picture of my baby on the bus and are they trying to kill me? Yeah. I am Mama, hear me roar!