It’s true; the Mir clan and the Jilbur clan had a meeting of the minds (and sand) at the beach yesterday. I had a message on my machine when I got home (late) last night, from a friend, saying–and I am not making this up–“I was just calling to make sure that you got home alright and weren’t abducted or murdered by any weird internet people.” Heh. How little my friend understands. If anyone should’ve been scared, it was Jill and family. Thanks to light traffic and overestimation on Mapquest’s part, we arrived half an hour early, whereupon I did the polite thing: called Jill’s cell and demanded to know why they weren’t home.

I’m a real pleasure to have as a guest.

So, the tale of our grand adventure, complete with a few pictures. I have promised Jill not to show any pictures of her without her approval, so you’ll have to settle for a few glimpes of our adorable children. Click the pictures to biggify. 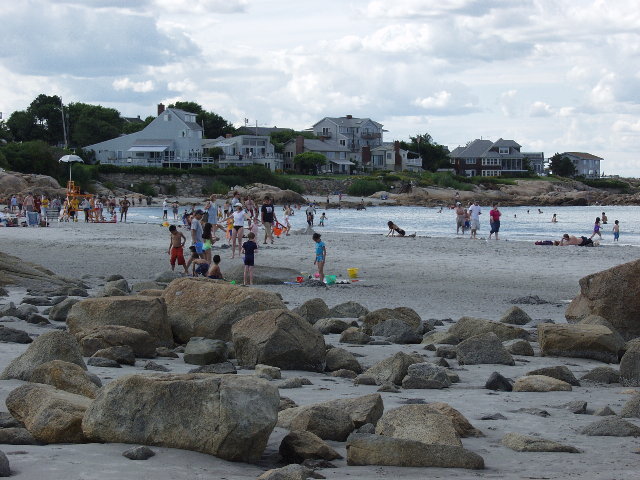 The day was perfect. Perfect! Warm but not too hot, a nice breeze, puffy fake-looking clouds, soft white sand, and giant seagulls that looked like they might take off with a small child if you didn’t keep a sharp eye. I haven’t been to the ocean in years and it’s trips like this that make me wonder why not. We were trying to set up our various beach paraphenalia and the three children were running around us in circles, delirious with the impossible task of trying to decide what to do first. Swim? Look for shells? Climb rocks? Dig? Get sand all over the freshly spread blanket? Too many choices! 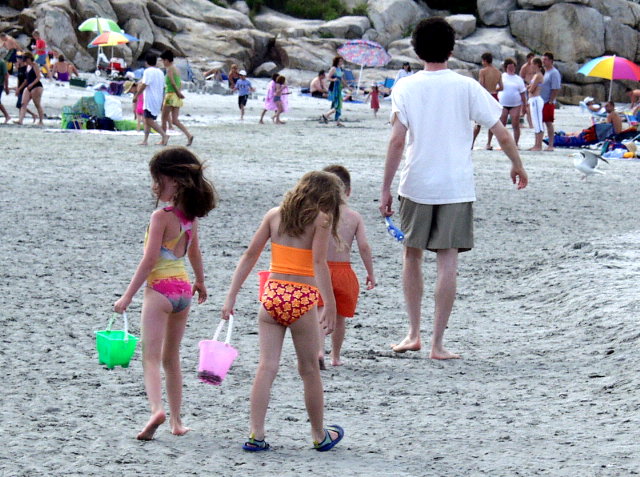 In addition to being an all-around nice guy, Howie earned the title of Intrepid Explorer And Kid Herder Extraordinaire, as this was pretty much the view Jill and I enjoyed of our families for most of the day. Howie led several expeditions, pied-piper-like, off to the tide pools and climbing rocks. My children, who had barely lifted their gaze to say hello not an hour earlier, were now trailing him in admiration. On the various return trips to show us their spoils, Monkey–who took quite a long time to remember Howie’s name–kept saying “He is really good at finding neat stuff, Mama! That guy is great!” Later, when he’d finally mastered it, Monkey could be heard hollering “Hoooooooowiiiieeeeeee!” far and wide, comfortably assuming that Howie had been placed on this beach to keep him amused. 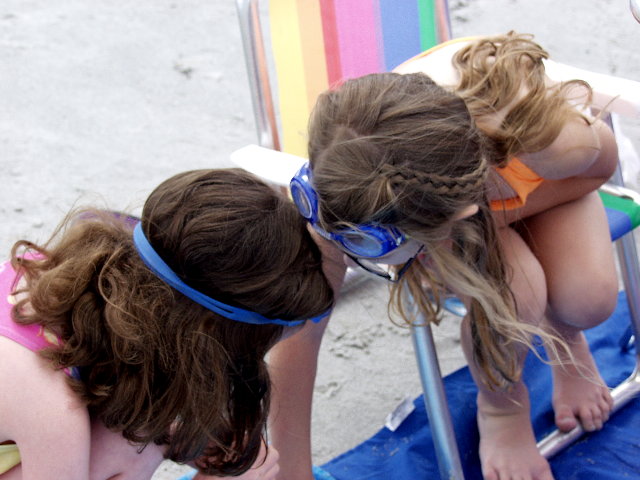 And what, you ask, of the two young ladies on this excursion? I present for your consideration, the children formerly known as Jellybean and Chickadee. For the duration of our visit I believe they were more or less a Jellybee or a Chickabean. I have not seen my daughter get along so easily and so well with another little girl with the exception of her cousin of the same age. And they were very tolerant of Monkey, as well. The whole encounter made us mamas proud. 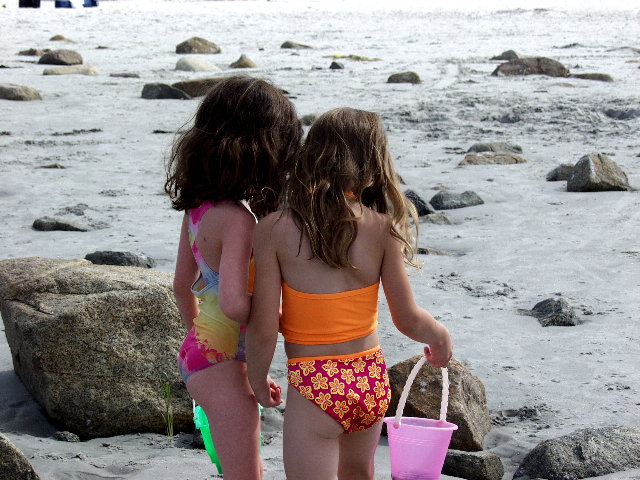 There were some elaborate projects which we only sort of understood, although it was all very serious and important to them. We knew better than to interrupt, for the most part. One thing was certain: all delicate undertakings are best completed with a pair of goggles on your head, apparently. At one point I noticed Chickadee was bleeding from a couple of leg scrapes (climbing rocks is not without some peril), and as I tended to those, Jellybean began to complain that she’d hurt her toe. Later when Jill and I fetched bags of snacks from the snackbar (that would be the aforementioned “several bags of chips”), I had not gotten Chickadee the exact same kind of chips that Jellybean had, and there was some gnashing of teeth and wailing. I think it’s safe to say that they bonded.

As for Jill and me, we sat on the sand took our time getting to know one another. It was a couple of hours, for instance, before I flashed the entire beach to show her the patch on my butt. (She asked to see it!) We considered taking a picture of our feet for blogging purposes, but decided that only two pairs of feet didn’t make for a very interesting picture. Then we thought perhaps we could manage some impressive sand sculptures, so decided to go that route, instead.. 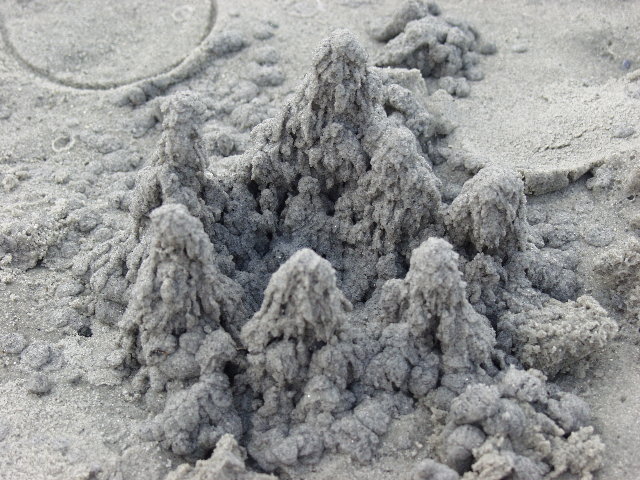 Behold… Driphenge! Jill is a very talented builder, er, dripper, of sand. She has schooled me in the way of sand dripping and I will never be the same. Also her creation is about four feet high. Really. Honest. Do you want to see the patch on my butt? (See how that’s a great way to switch topics?) Anyway, there was some sand sculpture but mostly there was gabbing. And laughing. And maybe a little bit of snorting. And possibly I was so involved in yammering away with Jill at one point that the girls waltzed up with handfuls of seaweed and we were talking about how cute they were being and I suddenly jumped bolt upright saying, “I am not panicking. I’m not panicking but where is Monkey?” And also possibly I was about two seconds away from hysterics when Howie located him for me, wandering down the beach trying to find us. But I’m not saying for sure because wouldn’t I be a lousy negligent mother if that had happened? Indeed I would, so I’m sure nothing like that transpired at all. Don’t give it a second thought.

So there was much beachiness, and the children were quite disappointed when we finally said it was time to get moving, so that we could go eat dinner. And the collective cry of “I’m all sandy!” rose up as if they had just now realized that, by gum, there was sand pretty much everywhere, and what had been delight while playing was now the bane of their little existences. And so the trek from parking lot to beach–which had been a mere skip, on the way in–stretched out into hundreds of miles on the return journey, as we adults struggled under our loads and tried to convince the children that yes, they could indeed keep walking even with sand in their shoes. Sheesh. We coaxed them along with promises of the shower at the end where we could rinse off our feet and shoes. Everyone was rinsed and patted dry and sand-free and then… stepped back into the sand. “I’m all sandy again!”

We drove back to their cottage, de-sanded as best we could, and got dressed. During this time I had a moment of wishing I’d lost my child at the beach, as he managed to slip on the steps and fall a most spectacular fall and scream for a full three minutes about how his socks were very bad and slippery and he was never wearing them again. Jill earned huge points as solicitous nursemaid by bringing Monkey some ice and applying it per his directions.

On to dinner! Fabulous seafood for the grown-ups, hot dogs or spaghetti for the little ones. Someone made a rocket out of a foil gum wrapper and shot it into the air at our dinner table. It was very impressive. That same someone was rather loose with her asparagus. In a moment of clarity I realized why the children were garnering so much praise for their behavior. Ahem. Anyway. Despite a few trips to us under the table, first by my daughter and then by her newfound soul sister, because–as she explained it to me this morning–“I was hugless, Mama!”, overall the children were quite marvelous.

As we discussed how it was a long drive home and we would change into jammies before we set out, Chickadee reminded me that I hadn’t brought toothbrushes. Oh. Right. Well, your teeth can be dirty just this once, honey. “Noooooo I don’t want to get a cavityyyyyyyyyyyyy!” The day was saved by Jill, effectively sealing her hero status in my children’s eyes forever. Jill had Oral-B Brush-Ups in her purse! To make your mouth fresh! And so! The children! Got to brush their teeth in the restaurant bathroom! Which was really exciting!

(And I commented to Jill that I would never think of the same thing, again, when asking someone “Do you have that not-so-fresh feeling?” To which she responded that that would be a fabulous marketing idea as well, then she chanted, “Rip, slip, brush, ahhhhhh!” as in the commercials and we guffawed at our cleverness much to the bafflement of our children. Chickadee was kind enough to pipe up, “Yeah, Mama, I saw that on TV, when the people on the stairs decide their mouths feel yucky!” Note to self: my children watch way too much TV.)

There were goodbyes and many hugs (Monkey tackled Howie) and then, alas, we were on our way back home. I got the kids changed into their jammies right there in the restaurant parking lot, because we are fancy and that’s the logical follow-up to brushing your teeth with a finger-mitten in a public bathroom. As we drove off into the dark, both children complained that they couldn’t possibly fall asleep, they were wide awake! I heard the first snore about a mile after we got back on the highway. When we got home, I carried them each up to their beds. Monkey mumbled, grabbed his blankie, and was still. Chickadee answered my “night, baby” with “night Mama… I like Jellybean.”

Know what? I loves me some weird internet people.