More about Target, my one true love

It’s true; I am a wanton slut for Target.  I will do unspeakable things to get to spend half an hour cruising the endcaps there.  Now you all know my weakness. 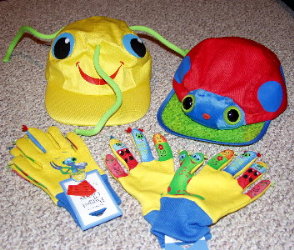 In addition to the Slip-N-Slide that is going to make me very popular here this weekend, I picked up several other have-to-have deals, and my heart went pit-a-pat as I did so.  How adorable are these??  I didn’t want to make the picture super-gigantic, so you may not be able to see, but those kiddie-sized gardening gloves actually have a different bug finger puppet on each finger.  I may have in fact cooed while I was putting them in my cart.  I mean, the kids’ “help” with my gardening is spotty at best, so they may as well enjoy their gloves, right?  All 4 items shown to you here?  Under $7 for the entire lot.  Because it was all 75% off.  This is why when I grow up, I am going to marry Target and have its babies.  (Yeah, the no uterus thing may interfere, but since it’s a fantasy, let’s just gloss over that part.)  But while I am waiting?  The pictured items are going into the top-secret Mama storage room to await–here is where I confess exactly how twisted I am–next year’s Easter baskets.  (Be gentle; it’s a sickness.  I can’t help it.)

I also purchased the Sid’s Room Toy Story Action Figure Set, mostly because my life feels incomplete without that freaky doll head on the erector set spider body.  But if anyone asks I will claim that I bought it because Monkey is a Toy Story freak and the set was 50% off.

For Chickadee?  Pink rain boots with butterflies on them.  For $3.24.  Are you beginning to understand??  It’s not like I could’ve just left them there.  I’m only human.

There were other things, too, but I’m starting to get all hot and bothered.  I’d better stop talking about it, or before you know it I’ll be back there again tomorrow.  But I hope that this has perhaps elucidated for the un-Targeted why I feel so passionately about The Happiest Place On Earth.

By the way, having spent some time there today?  Made me realize that life is too short for crappy customer service.  I’m going to dispute the erroneous charges from The Great Television Debacle through my credit card company, and leave Excellent Purchase to clean up their own mess, because I am done.  The second defective TV has now been in my house for over a week and despite four telephone calls on my part, they have neither arranged for a replacement nor picked up the piece of crap they left here.  Though they did manage to find time to charge me, twice.  The replacement television?  Will come from Target.  And it will love me like a good television should.